Yesterday morning I woke up from WEIRD dreams and felt all nervous. It took me ages to work out that this was due to a GIG - I do gigs all the time, why on earth would one be bothering me so much?

The reason was that this was a gig *I* was organising, something I very rarely do these days, and even more terrifyingly, it was the grand return of Totally Acoustic! For those new to these proceedings, Totally Acoustic is a regular night which I used to put on in the top room of pubs, where marvellous people who didn't usually do this sort of thing would stand completely unamplified in front of lovely people, do a bunch of songs, then get drunk. I stopped doing it for a couple of years due to doing my MA, but now that that's all nearly done and dusted I thought I might as well get it going again and thus it was that I rolled up at The King And Queen on Tuesday night, ready to ROCK.

When I arrived is was amazed to find that most of the acts had also arrived, and by 6.45pm everyone was there - this NEVER used to happen before, PANICKING about where people had go to used to be par for the course. Surely such an easy beginning meant that things couldn't possibly continue so well?

Weirdly they DID! We got a very healthy crowd in, everyone was GRATE, the recording equipment (for the forthcoming podcast) worked fine, and a marvellous time was had by one and all. After a rousing rendition of the theme tune Mr Matt Abbott was on first, doing a FANTASTIC set of poems... which is not a statement I think I have ever made before about anybody! He was exciting to watch and all his stories were ENTHRALLING, touching, funny, and full of thrilling lines. He filled the room up with WORDS, it was ACE! 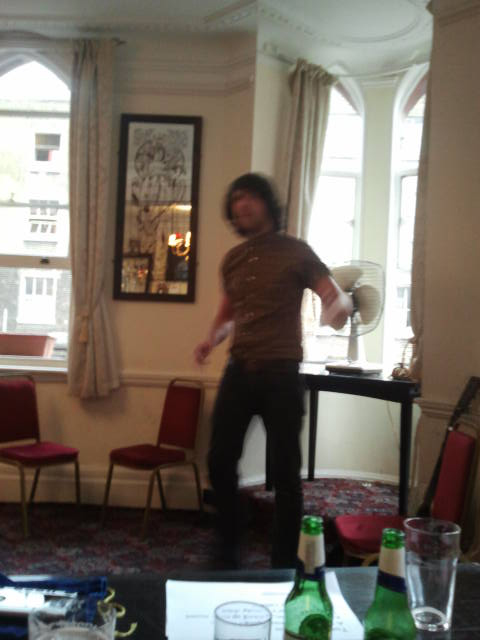 After Matt we had Mr Alexandar Hale, who is on proper TOUR at the moment, including Hibbettfest the other day. Excitingly he had two GUEST ARTISTES - Ms Emma Cooper and Ms Laura Graham - on with him this time, which he cunningly employed first individually and then TOGETHER for an earth shattering climax, shown below: 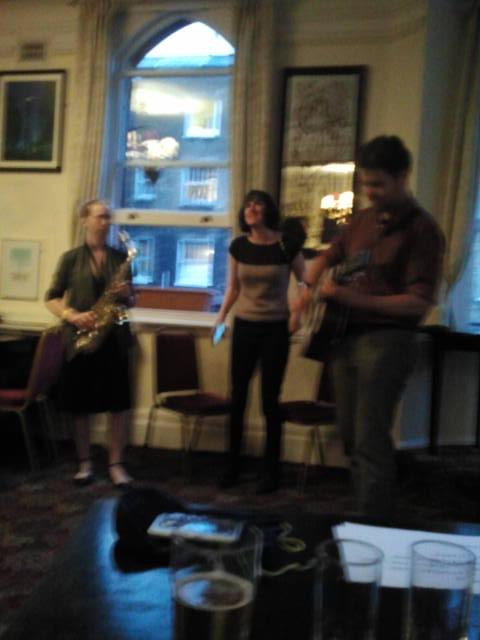 After all that excitement we had a much needed break, and then I came on to do a short set which consisted of the following:

This may look like a whole bunch of NEW songs, but it wasn't as new as I'd thought it would be - earlier on in the day I'd decided to do one or two SUPER NEW songs, the ones I'd just been finishing off for the new show, and had printed out the lyrics, but when it came to it i was too afeared so stuck to the less new, but still NEW new, songs. It seemed to go pretty well, and it was lovely to be back in one of my favourite pubs doing my favourite sort of gig again!

Finally we had Robberie, performing their DEBUT SHOW in That London, and they were ACE. I've played with them in Sheffield a number of times and loved them, so was desperate to get them down my way so that other chums could see them and love them too, which I think occurred. Great tunes, lovely lyrics, and a brilliant way of performing them - look, here they are now! 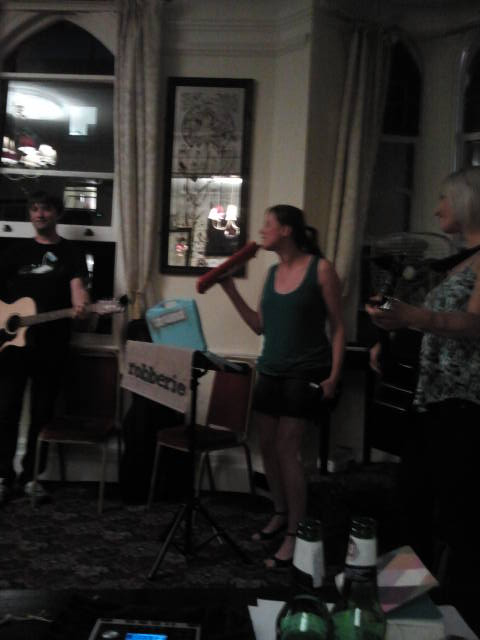 When all was done there was a whole lot of lurking about, chatting, hugging, and dispersing the frankly SIZEABLE whip round between the acts. I finally stalked out into the night extremely pleased to have it back, looking forward to being able to show it all off to even MORE people when I get the podcast out. It should be ready either just before or just after the weekend - more details are HERE, look out for it, it's going to be GRATE!