Blog: Banned From The Technical Area

Last Thursday found The Seats In My Stadium and I going round the back of The London Stadium for a Residents' Meeting about the Olympic Park. I must admit I was slightly GIRDING myself for BOREDOM as I have been to quite a few profoundly DULL meetings of late, but this was actually DEAD interesting. For one thing, we got to go into the Hospitality Area of the stadium, and then listen to some INTERESTING FACTS about what was coming up in the area. We also got to hear from some ARTISTS from the local area, one of whom seemed to think he was a REVOLUTIONARY ACTIVIST. He challenged one of the speakers, saying "Film has EMERGED of you saying this thing that is slightly inaccurate!" We thought "Ooh, secret filming!!" but it turned out to mean someone in the meeting had been recording it on their phone, in full view of a public meeting. Oooooh! SCANDAL!

After the talking was over we got to go on a TOUR of the stadium, starting in the Directors' Box where we stood out on the balcony looking onto the pitch. It felt WEIRD - I could see the SKY but still it felt like we were inside and the actual pitch looked TIDDLY. We then went to look at (and SMELL) the changing rooms, before heading down a tunnel and - LAWKS! - onto the pitch itself. As you can see, I found this EXCITING! 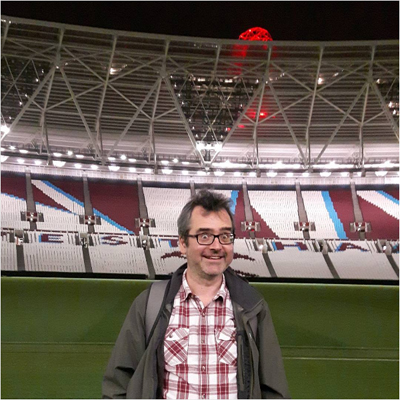 Other people - especially West Ham fans - were EVEN MORE excited, and all took turns sitting in the players' seats. I, of course, was much too dignified to do anything a silly as pretending to be a Beleagured Manager. 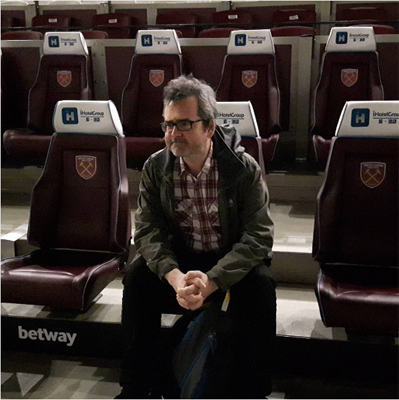 All right, maybe I wasn't. It was GRATE tho - we watched Match of the Day ESPECIALLY on Saturday to shout "LOOK! We have SAT there!" - and when we were finally SATED we headed back down the tunnel and OUT, for LO! it was the BEST kind of tour i.e. one in which we followed the route at our own pace without people telling you what you're looking at. After all, when one is presented with a football pitch one doesn't really need someone telling you what it is. And CRIKEY, when you're in a Football changing room your NOSE can definitely work it out!