On Sunday I headed to Derby to take part in an EXPERIMENT that could potentially alter the very FOUNDATIONS of ROCK!

For LO! I was off to that fair city to meet The Validators for a practice. "What's so experimental about that?" you may ask. "You guys are consumate professionals who practice almost ANNUALLY, often in The Midlands." This is true, but we have previously always practiced in Rehearsal Studios, whereas this time we were going to be practicing IN THE PUB!!

This idea had come about via the success of Tim's Giant Testicle AKA the CAJON he bought a while back and which we have occasionally been using for gigs. Anyone who has ever seen Tim in action will know that he is NOT A QUIET DRUMMER, but having him on the cajon (it's one of those wooden boxes you sit on and tap) means that the rest of us can pretty much play and sing without amplification and still be heard. This has had the amazing effect of allowing us to actually HEAR each other, and know what everybody else is playing, which after approx. 18 years together is something of a novelty!

I'd thus booked us a room at The Brunswick Inn, a lovely pub which we have often been to after conventional practices and which is very handy for the train station. When I rang I'd asked to use The Snug, but when I got there the chap behind the bar suggested using The Parlour instead ... which turned out to be the room I thought I'd booked anyway. There were a couple of people in there already, so the barman went and asked them to leave. I did feel a LITTLE bit bad about this, as one of them had a walking stick!

The Validators arrived in fairly quick succession, and the ensuing discussions covered The Legacy Of General Tito, Fabric Samples, whether Tim and Frankie could maintain a domestic relationship (and what they'd talk about instead of The Fall if Mark E Smith died), DOGS, and most excitingly of all the FACT that Tim's eyesight has got to the point that now THE BAND are all wearing glasses!! 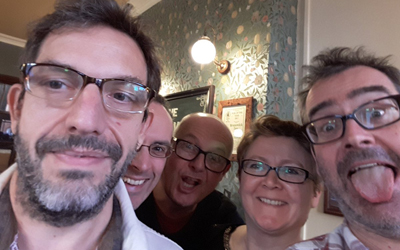 We ARE The Black Hair And Glasses Brigade! Sort of!

Once that was all sorted out we fell upon the songs themselves. We decided to go through the new songs in the order that they'd appeared on the set of DEMOES I'd sent everyone, which meant that the very first one was "Two Drips, One Pane". This was REJECTED by the band for "being a bit snidey". SUCH IS DEMOCRACY!

The next one, "Kenny's Brother Alan's Stag Do", had been the subject of some debate on the band email as to what it was ABOUT (NB it is a DEVASTATING SATIRE of BREXIT but apparently it only works as such if you tell people beforehand. Consider yourself told!) but once we gave it a go it seemed to work out pretty well. We changed some stuff around, as we usually do, and even changed one of the WORDS, altering "Nigel paid" to "Nigel said". This has happened very occasionally before, but I made sure that everybody understood that it was a one-off, and should not be seen as setting any kind of precedent for our current sessions!

Next up was "In The Pub (Talking Crap)" which sounded BLOODY BRILLIANT right from the start. I must admit I got quite excited - apart from sounding LOVELY with us all playing, it also has noticeable TUNES, also JOKES, also a POINT and a SINGALONG bit. It is, I feel, A HIT!

We were proceeding at a fairly leisurely pace and were going to require some time at the end for a Formal Band Meeting, so we skipped to the END of the list of songs in order to have a crack at our CHRISTMAS SONG, which we're hoping to record next month. It's a COVER of a German drinking song what I have translated into PETERBOROUGH, and though it isn't specifically about CHristmas, it does FEEL dead Christmassy. Also, it is UTTERLY FANTASTIC - rarely have all five of us been quite so keen on a song, and when we played it through it was WONDERFUL. I can't wait to get this one out there, it is ACE!

With that done we turned to BUSINESS, discussing our next gig, in April, and then what we were going to actually DO with these new songs. I'd had an IDEA which I can't really go into any DETAILS about as yet, but it was well received by The Validators and I was given clearance to go and talk about it with some other PARTIES who would be involved, if it comes off. I don't like to be MYSTERIOUS like this, honest, but as soon as I CAN say what it is, I will. All I CAN say is that it would be AMAAAAAAZING if it comes off!

And then it was time for us to conclude. The Pattisons headed home to monitor a Christmas Cake (ROCK) while me, Frankie and Tom had another drink before I had to go and get the train home. The whole experiment had, I feel, been a HUGE success - this will not be the last time we practice in a PUB!