The idea of dividing American comics into ages began in the mid-1960s, with the then current era being referred to as the 'Silver Age', named as a next stage after the so-called 'Golden Age' of the 1940s which saw the emergence of such classic characters such as Superman, Batman, Wonder Woman, Captain Marvel and Captain America.

Since then a 'Bronze Age' has been proposed as occurring from roughly 1970 to the mid-1980s, with several names, including 'Dark Age' and 'Platinum Age' for what came next. All of these names have been contentious for various reasons, including the fact that they were suggested by fans and collectors instead of historians or critics, that the terms apply only to superhero comics, and the way the infer a decrease in quality over time.

However, before any of these names were suggested, another age was already being loudly celebrated: 'The Marvel Age Of Comics'. The phrase first appeared on the cover of 'Journey into Mystery' #94 in July 1963 and was then proclaimed on the front of most of their superhero comics for the rest of the year. 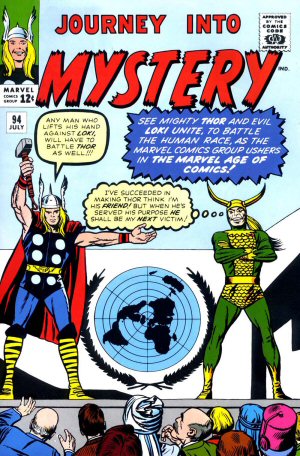 'The Marvel Age' therefore pre-dates all other categorisations of American superhero comics into ages. It might well be argued that this is just a promotional slogan used to sell Marvel Comics only - which it is - but I think it's also a useful way to look at an entire era of superhero comics when Marvel came to dominate the market both financially and artistically.

If we accept that there is such a thing as 'The Marvel Age' then we need to define it's beginning and end. The beginning is easy - November 1961, when the first issue of 'The Fantastic Four' was published. This series would set the tone for all Marvel comics to come and revolutionise the way that superhero comics were created. Until this point superhero comics had been straightforward stories for children in which unambiguously heroic characters fought evil together, never doubting their own mission or disagreeing with each other. The Fantastic Four were very different. They were a team of characters who argued with each other constantly, got angry about their fate, behaved selfishly, and generally acted like normal human beings.

The inspiration to write a comic like this apparently came from Stan Lee's wife Joan. When Stan Lee was told by his publisher to write a superhero team book, to compete with DC's Justice League of America, he was already thinking of quitting the business. Joan told him "Why don’t you do one book the way you want to do it? The worst that’ll happen, he’ll fire you, but you want to quit anyway. At least you’ll have gotten it out of your system." He took her advice, and together with Jack Kirby changed the medium forever.

It's clear from that first issue that this was a very different sort of comic book story, and Lee expanded his idea of portraying "The world outside your window" with all the series that he would go on to co-create, notably The Incredbile Hulk, The Avengers and The X-Men with Jack Kirby and Spider-Man and Doctor Strange with Steve Ditko. These stories would in turn inspire future generations of writers and artists, and force DC and other companies to come up with their own more emotionally interesting stories in order to compete.

Just as Marvel revolutionised superhero comics in the 1960s, so too did Alan Moore and Frank Miller in the 1980s with their series 'Watchmen' and 'The Dark Knight Returns', both published by Marvel's main rival DC Comics. These comics - along with non-superhero publications such as 'Love and Rockets', 'Maus' and others - promoted the idea that comics were not just for children and teenagers, but could tell adult stories worthy of standing alongside other forms of literature.

Marvel comics were left behind by this new wave of 'Adult' comics, sticking to standard superhero stories in a style dictated by its then editor-in-chief, Jim Shooter. DC Comics became known as a company who paid their creators well and provided more artistic freedom and thus were able to persuade more and more of Marvel's top talent to join them instead. This talent drain, along with a management style that many considered adversarial, led to Shooter being fired in 1987.

The end Shooter's regime marked the end of Marvel's artistic dominance of the superhero market. October 1987 was the last month in which all Marvel Comics listed him as Editor-In-Chief and, rather neatly, this was also the cover date for the final issue of 'Watchmen', and so I propose that this can be regarded as the end of 'The Marvel Age'. Marvel Comics themselves appeared to regard Stan Lee and Jim Shooter as the two bookends of this era, as shown by this cover to their fan magazine 'Marvel Age' in 1983. 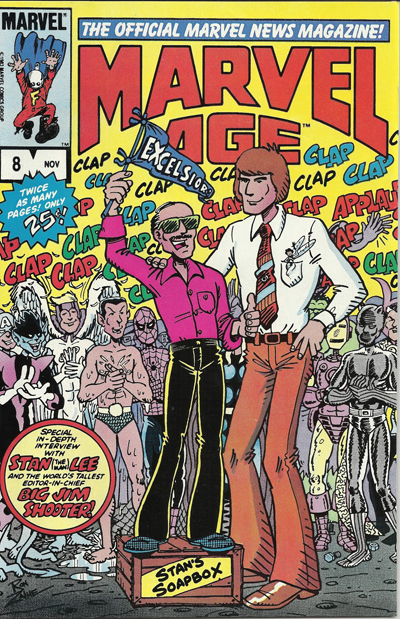 With November 1961 and October 1987 selected as the start and end points for my research my next step would be to identify the comics appearing in this time which featured Doctor Doom.