Captives of the Deadly Duo

After his first appearance in Fantastic Four #5 Doctor Doom returned in the very next issue, teaming up with The Submariner, who had been the villain in issue #4.

Like all of the Fantastic Four's most successful supervillains of this era, Namor The Submariner has a tragic backstory which informs his villainy. He isn't evil at heart, he has his own logical justification for doing what he does. In his case, he decides to take vengeance on the human race after discovering that his homeland of Atlantis has been destroyed by atomic tests. Fair enough really.

The first four and a half pages of this story are taken up with the characters going about their daily business (including answering fan-mail), bickering with and worrying about each other. 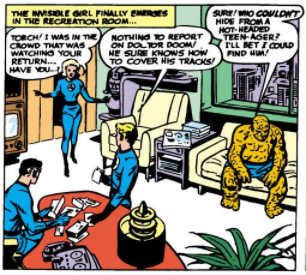 It's often said that this concentration on character was what set Marvel apart from its competitors at the time, and that's clearly the case here. The Fantastic Four definitely do not get on like chums all the time and the basic principles of their characters are already in place, especially for the frustrated, angry Ben and the pompous Reed.

While this is going on a pleasure boat out at sea spots a school of porpoises frolicking through the waves. On closer examination they realise that there's a human swimming amongst them - this is Namor, chillaxing between attempts at world domination. When his fun is disturbed by a flying vessel buzzing the school Namor leaps out of the sea and jumps onto its wing, demanding to know who'd ruining his leisure time. It turns out that the pilot is none other than Doctor Doom, getting Namor's attention in order to propose an alliance. Clearly since last time we saw him he found that "hidden site" he was off to. 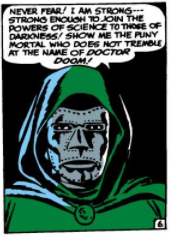 Note that once again he's talking about combining science and sorcery - this, as the modern young people might say, is his "jam".

They head back to Namor's home in the ruins of Atlantis to discuss teaming up, and Doom is surprised to find out just how chillaxed Namor really is. 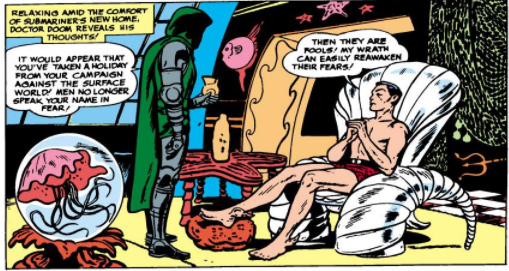 Doom needs the Submariner ready to fight, so he taunts him repeatedly until he's angry enough to agree to a team-up. Jack Kirby draws this brilliantly: 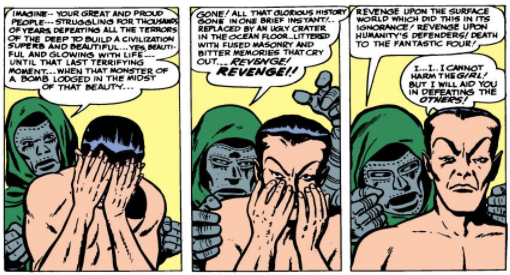 Psychological manipulation is another of Doom's core strengths, using it to get other people to do his dirty work for him and, as we shall see, it's all part of another cunning scheme.

It's worth noting that Doom's costume has changed slightly since the last issue, looking less medieval and almost exactly how it will remain for most of the next fifty years. The only big difference is that he has a single clasp holding his cloak together at the front, rather than the two large golden discs and chain of his classic look, but otherwise his design is already fully formed.

Back at Fantastic Four headquarters Johnny Storm finds a picture of Namor hidden amongst his big sister Sue's things. Like any annoying little brother he takes great pleasure in teasing her about it, at which point Namor himself appears, having flown in through the window. He claims to be on a mission of peace, and Sue stands up for him by pressing herself very closely indeed against his naked chest. 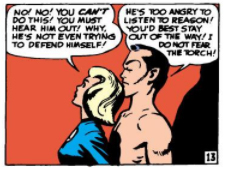 Where are you putting your hands, Sue?

Reed suspects that this is a trap, and he's right, of course, as another of Doctor Doom's amazing science gizmos lifts the entire building off the ground and into space with them all inside it. 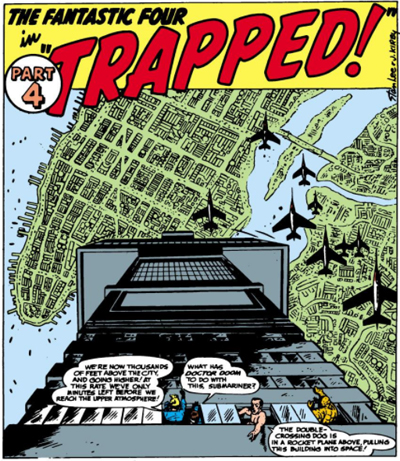 This is an incredible piece of artwork, it makes me feel vertigo just looking at it! Doctor Doom is double cunning here, as the trap for the Fantastic Four is also a trap for Namor - he has identified these five people as the only ones who can stop him in his quest for world domination, and now they're all out of the way at once! 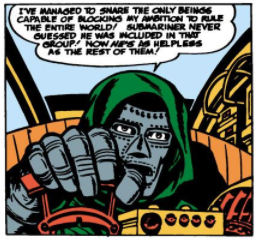 Eventually, after quite a lot of arguing, the Fantastic Four and Namor are able to work together, with Namor leaping through space from meteor to meteor to get to Doom where he uses the power of an electrical eel (which apparently he also possesses) to electrocute him and send him tumbling into space, where he is apparently lost for eternity. 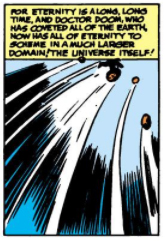 Two other quick things to note about this story. Firstly, the actual plot doesn't take very long, with the solution to the problem of Doom's kidnap attempt being wrapped up pretty simply in the last couple of pages. What matters is not the "puzzle" set by the villain, as would have been the case in other superhero comics of the time, but the interpersonal relationships of the characters. Secondly, this isn't really a story about the Fantastic Four at all, it's actually about the different approaches of Namor and Doom. To use classical storytelling vocabulary, Namor is the Protagonist who is met with a challenge, is tempted by the dark side, and renounces it, to return home changed, whereas Doctor Doom is the Antagonist, the evil reflection of the Protagonist who tempts him and must be rejected. It's their conflict that plays out here, demonstrating once again how important supervillains are in these stories, and why, once you've got a good one, you need to keep bringing them back!