The Return Of Doctor Doom

It says on the cover of this issue that "our fans oughta flip over this yarn" and that is no exaggeration, because not only does "surprise follows surprise as you actually meet Lee and Kirby in the story" but it also questions the very nature of reality itself!

The story kicks off with The Thing causing a mad panic amongst his colleagues by summoning them to his girlfriend Alicia's apartment using the Emergency Signal Flare. When they finally get there, having caused chaos all over the city in their hurry, they're a bit miffed to find that he just wanted them to pop round and see Alicia's latest artwork. One can understand their annoyance - they do have access to telephones, as we'll note later - but they are mollified by the display of miniature statuettes, which serve as both a round-up of all their baddies so far and also an eerie prediction of what it will be like in Forbidden Planet in the twenty first century. 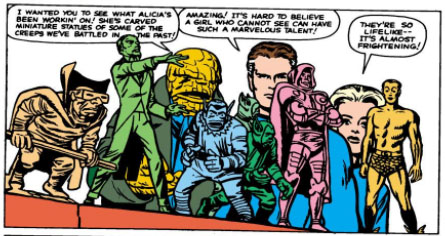 Meanwhile, over at "the studio of Kirby and Lee" we find Jack Kirby and Stan Lee in conversation, trying to devise a new villain for the Fantastic Four comic. While it's exciting to, as promised, "actually meet Lee and Kirby", it's also distressingly problematic. How does any of this make sense? Are Lee and Kirby godlike beings dictating events around them? If not, do they just make up the stories? Later on Reed Richards will talk about having agreed the next plot with Lee and Kirby, so does that mean the characters are real but all the events are made up? Is that why The Thing complains that they're making him look uglier than he is?

It's all made even stranger when Stan Lee complains about Doctor Doom being shot into space so that they can't use him in stories anymore. If Doom is real, and was really shot into space, then surely that infers that they're just documenting the stories as they happen, but then what's Jack doing inventing new characters? 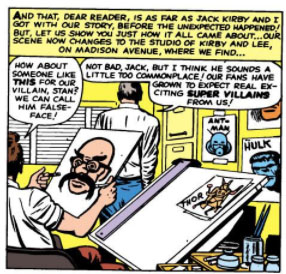 The only logical, sensible explanation is that Stan and Jack are basically GOD, creating the universe around them. This makes perfect sense, and is even (sort of) acknowledged many years later in Mark Waid and Mike Weiringo's run on "The Fantastic Four" when the team go to heaven and meet their creator.

All of these philosophical questions are set aside when Doctor Doom enters the studio to involve Lee and Kirby in his latest cunning scheme. He is recognisably the same character from previous occasions but now he seems even more tortured, at one point taking his mask off in front of Lee and Kirby, as he feels it is "strangling" him. 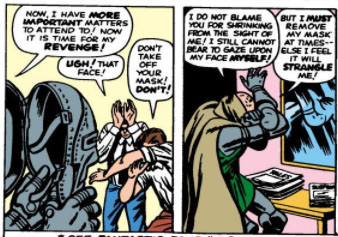 He forces them to ring Reed Richards (presumably because Lee and Kirby don't have an Emergency Flare) and call him in for a story conference, showing that Doom is aware of whatever arrangement exists between Marvel and the superhero team. When Richards arrives Doom uses a gas gun to knock him out and then kidnap him, which makes a nice change from it being Sue who gets captured all the time. Doom takes Richards back to his base and then explains how he managed to escape the eternity of space into which he fell the last time we saw him. It was ALIENS! 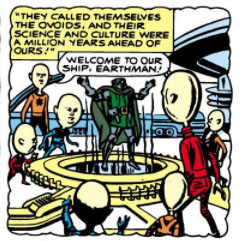 The Aliens in question are the Ovoids, a bunch of effete Space Wallies who happened to pick Doom up seconds before his oxygen supply expired. They are so civilised and trusting that they allow Doctor Doom to learn the secrets of their technology before dropping him off home again. One of these secrets is the ability to swap bodies, which he uses on Reed Richards. 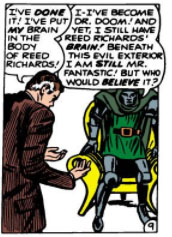 There's some great art and writing here, as the body-swapped characters still act and talk in their original personas, with Doom's facial expressions remaining in Reed's body, and the Reed trapped within Doom's armour no longer strutting around so arrogantly. 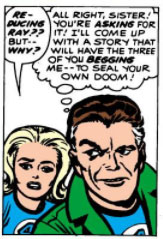 Interestingly, although Doom's speech is recognisably distinct from Reed's he does occasionally use somewhat "hep" turns of phrase, like "All right sister" and "You're whistling in the dark Mister" The idea that Doom comes from Eastern Europe won't be introduced for over a year yet, so it could be that Stan Lee is still writing him with an American accent.

The rest of the Fantastic Four arrive and ignore attempts by Reed-in-Doom's-Body to explain what's happening, instead getting over-excited with ideas about how to imprison him. Johnny comes up with a whole bunch of endearingly potty ideas which are very much in keeping with his character, including a blazing cell he can recharge once a week. Even at this early stage the characters all have distinct, enjoyable, personalities, which was a huge reason behind their growing popularity in a comics market where superheroes tended to be straightforward Good Guys.

Doom-in-Reed's-Body suggests that they use a chamber which he says - quite accurately - Doctor Doom had prepared to hold The Fantastic Four! So far it's all been quite a sensible plan, but it suddenly goes awry in the next chapter when we meet.. a whole bunch of shrunken animals.

Doom has been using these as a test for the next stage of his plan, which is something to do with shrinking bodies but leaving brains and powers the same size so that, when the bodies are returned to their normal size, the powers then increase with it. This makes no sense whatsoever, but it does allow Jack Kirby to draw SPACE DINOSAURS!

I flipping LOVE Space Dinosaurs - so much so that a few years ago I wrote and released a FULL CAST ROCK OPERA about them - but this is a deadly serious academical blog so we must not allow such things to distract us (though you can find out more here if you like). Back in the story Doom continues to explain his ludicrous scheme, telling the three superheroes that this project will allow Johnny to fly faster, Sue to turn different parts of herself invisible (which she's been shown to be able to do on several occasions already) and Ben to change back to human form at will.

On first reading this comic I was enraged by how stupid the whole scheme is, but then had to chastise myself because, it turns out, Doom himself knows how daft it all is and is thoroughly enjoying tricking Ben, Sue and Johnny with something so idiotic. 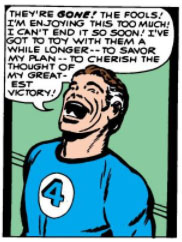 There's something in this panel that reminds me of a leading British politician. I can't think who though - he's guffawing about conning a whole bunch of people into doing something utterly stupid, but I can't quite put my finger on it.

Anyway, while this is going on Actual Reed escapes and goes round to see Alicia. Unfortunately for him Sue has also gone round to tell her about potential benefits of Brexit... sorry, I mean the Shrinking Super Powers Machine that definitely works, so is able to clonk "Doom" round the head with a vase. However, the blind Alicia, unbiased by how Reed now looks is able to sense "an aura of goodness about him... of nobility."

Sue tells her not to be stupid, then Johnny and Ben pile in to duff "Doom" up. However, this time they too sense something different about him (so Sue, Reed's lover, is the only one who can't tell him apart from their worst enemy...) and decide to take him back to the Baxter Building to see what "Reed" thinks. This means that Actual Doom is forced to move the con forward, trying to persuade them into the shrinking machine with some haste. Actual Reed tries to stop them and the others realise that he is sounding and acting like their leader, so Johnny tries a cunning plan of his own: he creates a "heat mirage" of a dynamite stick from a handy nearby building site. 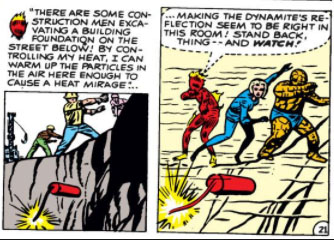 Despite making no sense whatsoever this works brilliantly, with Actual Reed throwing himself onto the dynamite stick to save the others while Doom tries to save himself. In the ensuing melee Doom loses his mental concentration and is returned to his own body again. 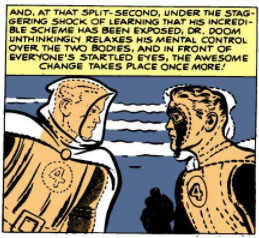 All that remains is for a bit more scuffling, during which the shrinking ray gets accidentally switched on so that Doom gets zapped and shrunken out of existence. 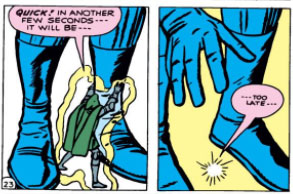 Once again, the climax of the story feels incredibly rushed and based on an accident, but then that's not really what it's all been about. This has been a character piece from start to finish, examining who these people are and how they relate to each other and, despite the space dinosaurs, dynamite mirages, accidents and "senses", it ends up as a triumph.

With Doom definitely completely dead* I guess it'll all be just memories and mentions of him from now on. Find out for yourself, true believer, in our next thrilling episode!