When I set out on this pulse-pounding project I combined several different comics databases in order to select a "corpus" of comics which, in theory, featured Doctor Doom. I say "in theory" because the different ways these databases list character appearances, and the different people who do it, means that several comics got into my list where Doctor Doom doesn't actually appear in the story itself.

An excellent example of this is The Incredible Hulk #2 which doesn't feature Doctor Doom at all, except for an advert promoting Fantastic Four #5. Interestingly (for a certain value of "interesting"), in this advert his mask is coloured correctly, rather than the green version that appeared on the actual cover. 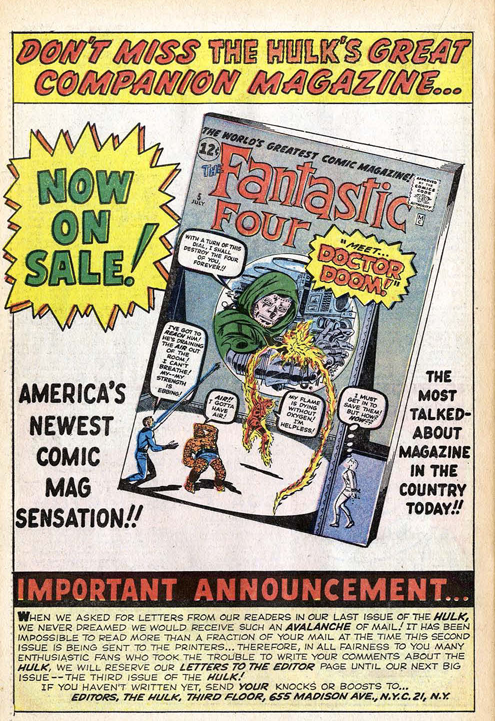 There are other occasions when he does appear in the story but only in passing, such as when another character mentions him, or he pops up in a flashback. As discussed previously I'm going to keep these stories in the final corpus because they count towards Doom's presence in the Marvel Universe as a whole, but I'm not intending to devote any of the main weekly blogs to them as there won't be much to say, Doom-wise.

"Doom-wise" is a great phrase which I hope to be using constantly during the lifetime of this blog, by the way.

I do however plan to talk about them a bit, starting with the very first Doom cameo in a rather wonderful story called "The Threat Of The Torrid Twosome" in Strange Tales #106.

This one appears in the databases because Doctor Doom appears briefly in a single panel (making Dick Ayers the first person apart from Kirby to draw Doom), as the Human Torch thinks back on some of the times when he, the Torch, has been completely brilliant, and definitely the best member of the Fantastic Four. 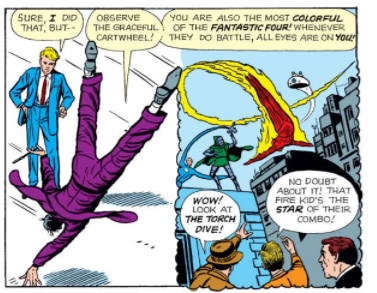 This sets out the theme for the entire story: Johnny Storm is a total idiot. Having said that, his daftness is portrayed in a surprisingly endearing way, like an adult looking back on what it was really like to be a teenager. Teenagers in comic books, in all media in fact, are often shown as wise, pure, questioning and unfettered by the petty concerns of dreary adult life, which is a lovely thing to think if you actually are a teenager, but of course completely unrealistic. I am sure there are teenagers who aren't self-obsessed idiots, but I have certainly never met any, even (especially) when I was one myself. When I think back to the decisions I made at that age my overriding thought is always "Why on earth did I do that?" and the answer is always "Because I was an idiot." 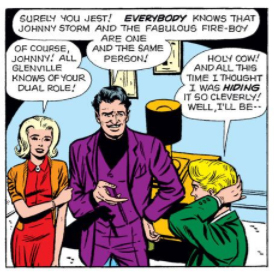 Great idiotic acts in this issue include working hard to protect a non-existent secret identity (he thinks that nobody will associate him, Johnny Storm, with the world famous Johnny Storm who looks exactly like him and also has a sister called Sue) and joining a brand new team called "The Torrid Twosome". Clearly Johnny doesn't know what the word "Torrid" means, but can't be bothered to get a dictionary because he is, as stated above, an idiot. 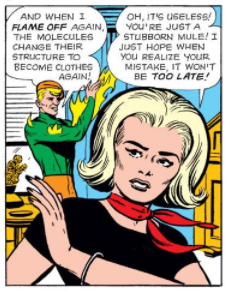 Beautifully, Stan Lee highlights this idiocy throughout, with other characters referring to it constantly. Local children laugh at Johnny behind his back because of his supposed secret identity, Sue Storm gives up trying to persuade him out of his stupid plans for The Torrid Twosome and tells him to just get on with it, and The Acrobat, the story's supposed villain, laughs constantly at what a pillock Johnny is and how easy it's been to trick him into opening a bank vault for him. Eventually the day is saved by The Fantastic Four who, like my mum secretly following me on my paper round to make sure I'm all right, have followed at a safe distance to check that he's okay. 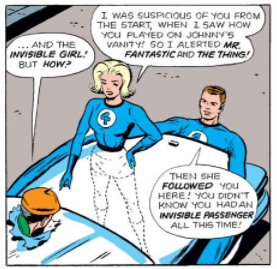 The main difference between me and Johnny is that I didn't get shot by a Frenchman while delivering The Peterborough Advertiser, which demonstrates once and for all that my mum is better than 75% of The Fantastic Four. The issue concludes with Johnny trying to make out that he new The Acrobat was a wrong'un all along, and he was carrying out a cunning plan to catch him. The rest of the Fantastic Four are all very nice about it, but it's absolutely clear that they don't believe a word he's saying. 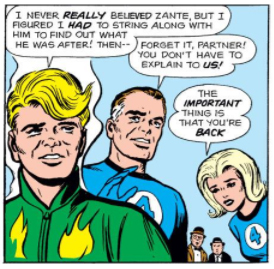 It's a not a particularly thrilling superhero story, but it is a surprisingly touching depiction of a teenager from someone who's long stopped being one, and well worth a read.

The next comic we'll be looking at is another cameo, this time in a story which defies logic and, indeed, good manners. It'll be up on the blog on Monday, but in the meantime any thoughts on this, or any other issues so far, would be most appreciated in the comments!