It Had To Happen!

Just over a year since he first appeared, and still very much in the early stages of the Marvel Age, Doctor Doom makes his first "proper" hop into another series outside of The Fantastic Four with this appearance in Amazing Spider-Man #5. He's certainly been mentioned in several stories already, but this is his first actual appearance in another title, and an early example of the way that characters were free to move around between different series in the new Marvel Universe.

The series may have changed but Stan Lee is still the writer, so there are several recurring themes that recur (as recurring themes tend to do), including the use of television sets as plot engines. TV screens pop up throughout this issue, providing information and driving the story forward, such as in the very first panel where Peter Parker's schoolmates watch a J Jonah Jameson advertorial about how awful Spider-man is. 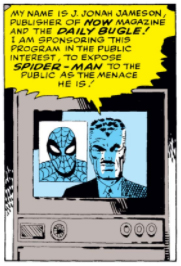 This blog is meant to be about the development of Doctor Doom as a character, but it's interesting to see the way that other characters are also in flux in these early days. For instance, the Peter Parker we meet here is not the guilt-ridden groovy teenager we come to know later on, but rather a distinctly angry, and somewhat unpleasant, young man who is full of inner rage towards pretty much everybody apart from his Aunt May. 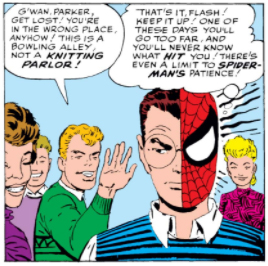 Doctor Doom is watching telly too, which gives him the idea to see if he can enlist Spider-man to help him beat The Fantastic Four - if he really is as bad as Jameson says, thinks Doom, he'd make a good partner. While mulling this over Doom handily recalls the last time we saw him, chucking himself out of an airship to escape the Fantastic Four. 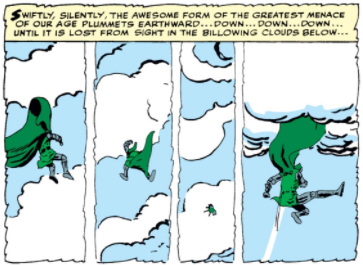 This sequence is almost exactly the same, in text and illustration, as his airship exit in Fantastic Four #17, except for an extra panel at the end showing him igniting his rocket belt. This attention to detail demonstrates a growing awareness of the importance of continuity, especially in the midst of the furious pace of production at Marvel. Having the two sections match so well shows that some care was taken to show that this was the same story as before, just being carried on in a different title.

There's more evidence of the growing fictional universe on the next page when, after being called to Doom's lab by Spider Telepathy (something invented here but, as far as I know, never referred to again) Spider-man sees Doom through a window and says "I'd know that guy anywhere." According to the actual comics he's never met or even spoken about Doctor Doom before, so he must have found out about him at some other time, away from the comics page. This is evidence of a whole world of stories happening outside of the ones we get to read, a much larger ongoing storyworld which Matt Hills calls "the Hyperdiegesis" (and what I call "part of my PhD title").

Doom asks Spider-man to team up with him, while secretly planning a double-cross. 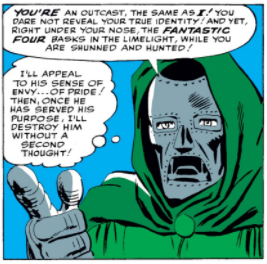 Spider-man considers the offer for a moment then declines, not because it's a bad idea but just because he doesn't think he needs a team-mate - another example of Peter Parker's much less heroic character at this stage. He webs Doom up, only to find out that he's been speaking to a robot... which is a little strange as, only a few panels ago, that robot was thinking about destroying him. This sort of logical error is evidence of the speed of creation of these comics, and highlights again how remarkable it was to see that flashback so meticulously done. Perhaps it's also evidence of Stan Lee not applying the same levels of rigour to his scripting as he does to the artists!

Spidey escapes and Doom blows up his lab to stop anybody finding out his secrets. Next day Peter pops over to the offices of the Daily Bugle for a brief interlude where we see the greed which drives J Jonah Jameson's editorial policy, and another flash of Peter's internal rage. 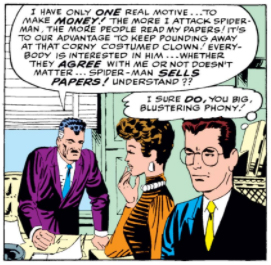 To be fair, Peter does have a right to be angry, as his life is pretty difficult. We see an example of this next as his schoolmates plan a prank to utterly humiliate him. Flash Thompson has dressed up as Spidey in order to leap out and terrify Peter, a plan which a great gang of fellow students take enormous delight in. "Poor Peter! He'll never get over it!" says one of them, full of glee. 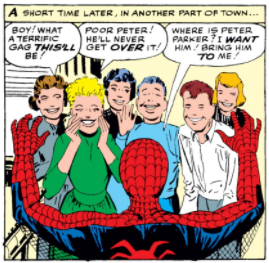 Steve Ditko really sells the relish on the faces of the students here, in much the same way that he conveys Peters rage elsewhere. This fury at an unjust world permeates the whole issue, and comes as something of a shock after the rough and tumble excitement of Kirby.

Things go wrong for Flash just as he's about to carry out his mean scheme. Doctor Doom turns up, having tracked the real Spider-Man down using a "Spider Detector" - a device which is a) somehow related to the previous bit of "Spider Telepathy" and b) also never to be used again - and kidnaps Flash by mistake. He makes this error because Flash is only a couple of feet away from Peter, who trudges by on the other side of a fence, lost in his angry thoughts. 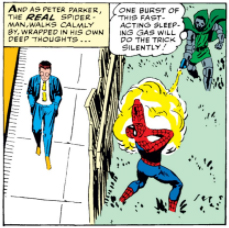 Back at Aunt May's house there's more use of television screens as narrative devices (Steve Ditko pre-empting Frank Miller's use of the same technique in 'The Dark Knight Returns' by twenty years!) as Doom reveals his cunning plan to use Spider-Man as a hostage to force the accursed Fantastic Four to give up superheroing. Say what you like about Doctor Doom but he doesn't give up on a methodology just because it's failed multiple times before. Maybe the problem with the whole "kidnap someone in order to blackmail the Fantastic Four" scheme is just that he's never tried it with Spider-Man before?

While Peter's watching all this on the news, trying to work out what on earth's going on, he gets a call from one of his classmates telling him that it's Flash who's been captured. I'm not sure why they're ringing Peter, as it's not like he can do anything about it as far as they know, and he and Flash aren't exactly chums, but it does give rise to an alarming panel where he considers doing absolutely nothing to help. 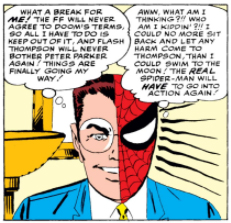 I can completely understand Peter's point of view here - Flash has made his life miserable, after all - but it's still a little disconcerting to see, especially when Ditko draws him like he's about to laucnh into a maniacal cackle, and it's yet more evidence of the way that Spider-man's personality was still in flux. He does decide to do the right thing in the end though, and sets off to track Doctor Doom down, at which point we get a remarkable caption which thanks the reader for sitting through what it describes as "the longest introduction you've ever read"! It's a lovely example of Stan Lee's supposed openness and honesty with the readers, pre-empting their complaints and folding them into the fun of Marvel. It's also true, as the action does shift up a gear at this point, with Spider-man breaking into Doom's latest headquarters and launnching into the issue's fight scene.

Another recurring theme in these early years of Doom and The Fantastic Four has been the nonsensical ways in which Johnny Storm's nebulous "flame powers" have been used, such as fusing water into solid forms, creating mirages, or constantly making solid devices out of fire. Something very similar happens here, with Spider-man apparently able to use his webs to create solid objects like shields and web-balls - it turns out that he got the idea from Johnny Storm! 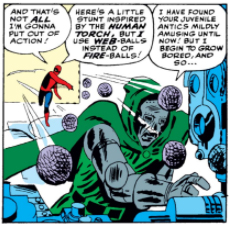 Other regular features of Doctor Doom appearances which crop up during the fight include Magnets! Electricity! and Robots! Some might say that this is Stan Lee recycling plot devices, but I like to think of it as coherent characterisation, with Doom having a standard set of fight moves he likes to use. As the battle goes on it turns out that Doom policy of re-using tactics was completely correct. These moves may have failed against the Fantastic Four, but when used against a single teenager with the powers of a spider, he actually manages to win! 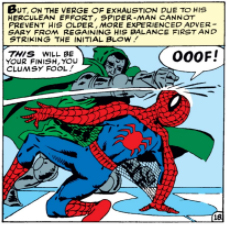 It's only the arrival of the Fantastic Four that save's Spider-Man's life, and leads to Doom repeating himself once again, by jumping out of a window to escape. 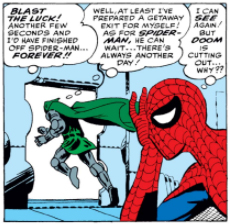 The issue ends with Spider-man having to rush home, leaving Flash Thompson to meet the Fantastic Four who, in yet another example of the joyfully casual use of the shared Marvel Universe, only actually appear in a single panel. The issue finishes with a slightly alarming scene where the adult professional Betty Brant lusts inappropriately over the certifiably under-age Peter Parker, and then a rather nice gag about Flash Thompson showing off about his part in the defeat of Doctor Doom.

As well as being a thoroughly enjoyable story this issue is a great example in the way in which the shared world of Marvel comics was developing, and a clear sign that the characters were able to maintain their own personalities, and their own continuing stories, as they moved between publications. This was Doctor Doom's first trip into another series, but it would by no means be his last!