At The Mercy Of Rama-Tut

This is yet another example of an issue in which Doctor Doom is mentioned as part of the story without actually appearing in it, although this time he does have a bigger presence than just being part of the recap. 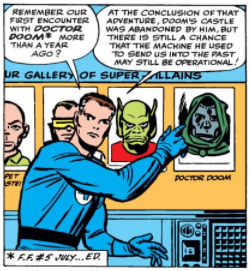 This sort of labelling would be heavily used three years later in the "Batman" TV series, but at this point seems to be commonly accepted as a sensible part of Superhero Admin. After all, if you don't actually SAY it's a gallery of villains, visitors might think it's a gallery of people you like.

That's the only appearance of Doom in the story, but we do get a visit to his earliest headquarters, where I'm sure everyone will be relieved to discover that the crocodiles in his moat are alive and well, not boiled alive as previously feared. 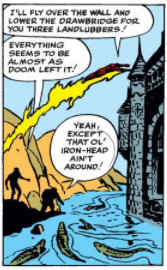 Alas we don't find out what happened to Doom's pet tiger, but we do see that lots of his equipment is still working, so maybe not everything was burned to the ground after all?

The FF are there to use his time machine to travel back to Egyptian times for a caper in which they meet a time traveller who, it's inferred, is a distant descendant of Doctor Doom 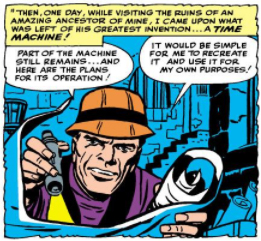 The exact relationship between Doom and Rama-Tut will be explained (also confused) in later issues, but for now he's rather delightfully portrayed as a 31st Century TV Addict who decided to use amazing futuristic technology to stave off boredom, something which I feel we can all identify with. 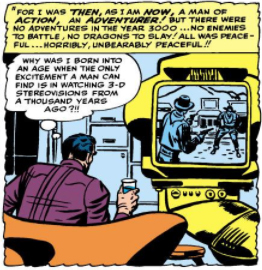 It's worth noting that once again Stan Lee is using television as an engine of plot. This is a theme that keeps cropping up during these early Marvel comics and it's perhaps evidence of an obsession with television that would eventually lead to Lee moving to California to try and persuade film and TV executives to create adaptations of his characters.

The FF manage to beat Rama-Tut and return to the present day, but still manage not to win, exactly. The whole point of travelling back in time had been to collect a radioactive herb which can cure Alicia's blindness, but when they get back to the present day they realise that the time machine has left it behind.

It's a surprisingly downbeat ending that demonstrates the way in which creators like Lee and Kirby were trying to do something different with their storytelling, apart from the usual stories of heroic characters constantly winning. Their stories featured not only sympathetic villains like Doctor Doom, but also fallible heroes who do not always emerge victorious.

SPOILERS: if you don't enjoy fallible heroes, don't read the next blog. It's a Fallibility Festival!