The Fantastic Origin Of Doctor Doom

When Doctor Doom's origin story was finally told, here in Fantastic Four Annual #2, it had been two years and at least seven separate stories since his first appearance, way back in Fantastic Four #5. In the introduction to Bring On The Bad Guys, a reprint collection of supervillain origin stories, Stan Lee claimed this was deliberate, saying that "... it wasn't until 1964 that we really had time to do the kind of origin tale I felt Doc Doom deserved ... one that would make the reader really understand what motivated him, what had turned him into a villain, what made him the tragic, tortured tyrant he was."

I don't know whether that's an accurate description of why it took so long - there was, after all, a very abbreviated origin back in Fantastic Four #5 - but, to take my sober, analytical, academical hat off just for a moment, I have to say that it was totally worth the wait for this "full" version of the origin story as it is a CRACKER! Doctor Doom has, until now, been an interesting antagonist with a brilliant design and hints at greater depth, but suddenly, in this issue, we're introduced to a vast wealth of background detail. In places it all feels oddly like a superhero origin, very similar to Batman's origin, not least in the fact that both characters are orphaned when they are very young and swear vengeance upon their parents' killers. Doom's enemy is not a mugger, however, but the state itself. Where Batman sets out to fight the injustices of crime, Doctor Doom fights the injustices of government. 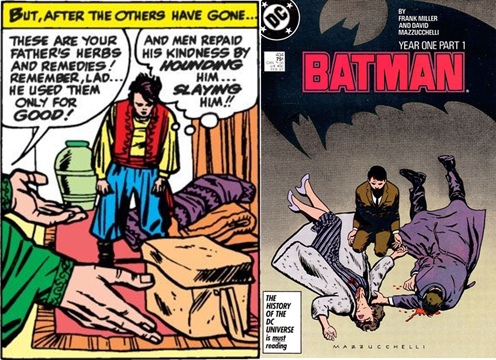 This story begins in the present day, with Doom's servant Boris collecting his master for a visit to a mysterious grave. They're in Latveria, a small East European country "nestling in the heart of the Bavarian alps" which also happens to be Doom's kingdom. This is the first time we've heard any of this, and the way it's all dropped on the reader in one go without apology or explanation is a real jolt. The last time we saw Doom he was lost in space (again), and although that will all be explained later, in the second story in this comic, it's not mentioned here at all.

Instead of a recap we're thrown into a flashback of Doom's youth in Latveria. It's a very confusing place, with Jack Kirby's illustrations showing an almost medieval world of peasant cottages and gypsy caravans living side by side with high tech tanks and force fields. 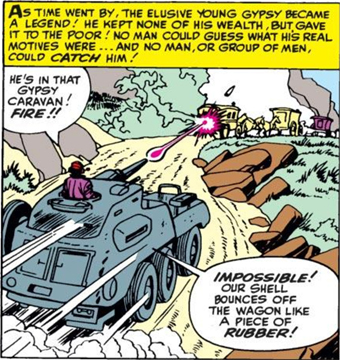 One of the main factors in the success of early Marvel was Lee and Kirby's ongoing mission to combine reality with fantasy, most notably in the way they placed fantastical superhero stories in a recognisably realistic version of Manhattan. They appear to be attempting something similar here, transposing the action to a version of Eastern Europe, although the people of Latveria look more like characters from Hollywood movies set in "ye olde Europe", wearing lederhosen and dirndl, than contemporary citizens of this part of the world in "our" universe.

We might be able to explain this confused idea of Eastern Europe by considering Lee and Kirby's backgrounds. Both men spent a great deal of their youths in cinemas, absorbing Hollywood versions of Europe, and had first generation Jewish immigrant parents who had fled to America to escape persecution - The Kurzbergs (Kirby's real family name) coming from Austria and the Leibers from Romania. Kirby talked about this in his autobiographical (and brilliant) strip Street Code, describing his youth as "A time when Europe was still visible to your parents".

We can use deduction and high powered maths to work out that this flashback must be set in the 1930 - Doom is roughly the same age as Reed Richards, who fought in World War Two (at least, he did in this early version of the Marvel Universe) before going to college- when gypsies like Doom's family were routinely persecuted in Europe. Here Doom's father, a doctor, is kidnapped by Latveria's secret police to attend to the wife of their hereditary ruler, the Baron (Why a country continually referred to as a kingdom is ruled by a Baron is not explained). When the Baron's wife dies the von Dooms have to flee, and Victor's father dies of exposure while trying to lead his son to safety. This part of the origin may have its roots in Kurzberg family legend - Kirby claimed that "my father had insulted a member of the German aristocracy. My father knew he'd be killed, so he decided to emigrate."

When he is returned to the gypsy camp Victor sorts through his father's effects and discovers that his mother, who died giving birth to him, was a witch, and decides to use her potions and devices to take revenge on Latveria's rich and corrupt upper classes. 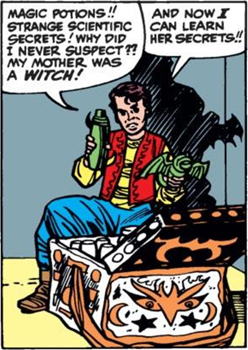 After a series of ingenious guerrilla attacks Doom comes to the attention of the Dean Of Science at State University, who travels to Latveria to invite him to attend college in the USA. This is cultural imperialsim, and it's the point where Doom's origin changes to that of a supervillain. When the Dean transports him from his pro-social roots to a new, unfamiliar environment, he finds it increasingly difficult to fit in with the all-American student body (including a gratingly eager Reed Richards) and isolates himself, conducting terrible experiments which ultimately, literally, blow up in his face. 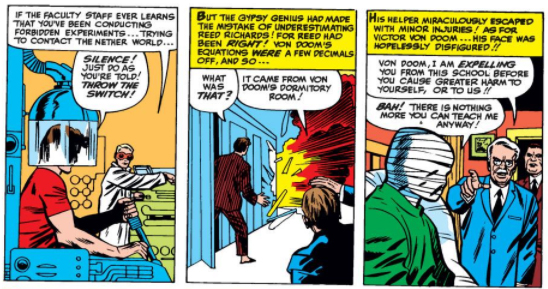 As with previous recaps, it's worth noting how closely this section reflects the original origin we saw back in Fantastic Four #5. 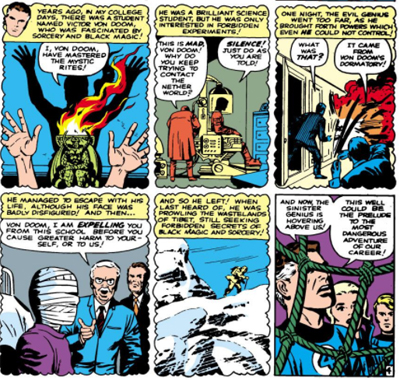 As explained back then, when Doom is expelled from college he sets off on a journey into the himalayas to find a mountain community of monks who can help him continue his study of the dark arts. A quest for special powers in the exotic East is a common story trope in Western fiction,especially in superhero stories, and features in the origin stories of Doc Savage, Doctor Strange, Deadman and indeed in later version of Batman's origin. Usually the Western student learns from the Eastern mystics, but here Doom makes himself leader of the monks, ordering them to build him a high-tech suit of armour and face-mask which, when worn, transforms him into his true self - Doctor Doom!

Stan Lee has said several times that he never thought of Doom as a villain, but that doesn't mean that this is a superhero story either. Superhero stories of this era, including origins, tended to follow what Robert Jewett and John Shelton Lawrence called "the American Monomyth", where a mysterious stranger arrives in town, sees oppression, intervenes to stop it, and then fades away. Doom's origin has much more in common with Joseph Campbell's "The Hero's Journey", a universal myth where a young man is called away to adventure, endures trials and eventually returns home changed (I'm putting publishers out of business here aren't I?). This is exactly what happens to Doom, with him returning home and conquering Latveria for himself, where the delighted citizens happily salute him as 'The Master' as the story ends.

The full story of how he overthrew the previous ruler would not be told until "The Books Of Doom" mini-series many years later, but it's clear already that, although he's not a superhero, hes not a hated dictator either. He's more like a beloved national leader in the mould of General Tito, who takes power in order to protect his people from those who would do them harm - someone Americans would be wary of, but also respect.

By the end of this story Doctor Doom has finally become the character that he would, for the most part, remain for the next five decades. There would be changes in the way he was interpreted over the years, as we'll see as this Doom progresses, but he is now, at last, recognisably Doom!

All that is to come, but for now there's a whole other Doom-focused story in this double sized issue, where we find out what actually did happen to Doom, out in space. See you next time!