The Final Victory Of Doctor Doom

This particular story kicks off with several pages of the usual Fantastic Four hijinks, as the Thing crashes the Fantasticar into an old jalopy and then gets offered a thousand dollars to smash up another car, so that the "crackpot" who pays for it can sell the results off as "an original 'clobber creation' by the famous Thing!". 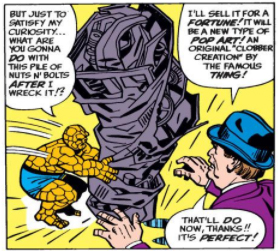 The action then switches to Outer Space, where we find out what happened to Doctor Doom after he fell into it a few months ago. This isn't the first time he's been lost in the infinity of space and, just like last time it happened, he gets picked up by a passing spaceship just in the nick of time. 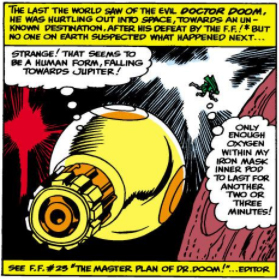 There are many conclusions one could draw from this, but I think that the main one is that Doctor Doom is a right jammy sod, and that if ever you need to go hitch-hiking he would be the perfect partner.

The spaceship belongs to Rama-Tut, who we met not long ago. Once again Lee and Kirby are reinforcing the continuity of their fictional universe, building on past stories to create something more complex and, in this case, more confusing too. Doom tells his saviour the story of how he got here, and we get our second re-telling of the events of Fantastic Four #21. As with the version show in Strange Tales #122, a lot of care has gone into matching the recap to the original version, with Doom's stance as he falls into space being especially carefully redrawn. 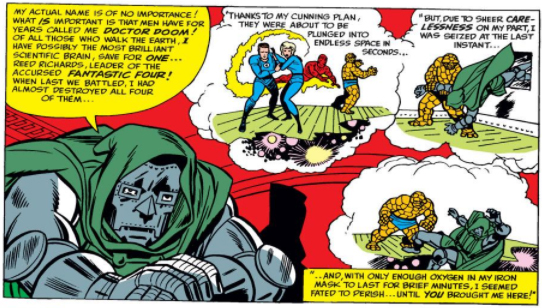 Rama Tut is amazed to discover that he's speaking to his ancestor, and decides that this is far too improbable to just be a coincidence (I'm with the Pharoah on this one), so must be part of a Grand Design. This leads the pair of supervillains to decide that there's a good chance that they could be one and the same person. 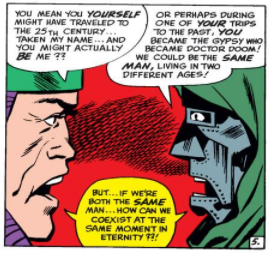 This makes absolutely no sense whatsoever. Surely one of them must be the earlier version, in which case he would remember this meeting having happened before? They also agree that they can't fight the Fantastic Four together, because if they "are one and the same man, and if either is slain, then the other, too, will perish! For you cannot live in the future if you are slain in the past! And I cannot live in the present if my other self dies at the same moment in eternity."

No, Victor, I'm pretty sure it's entirely fine for you to keep living when your future self dies. In a very real sense, that's sort of what we're all doing anyway.

Still, they decide to send Doctor Doom back to Earth to take his revenge, and he parachutes down to New York Harbour before stomping across town to the Latverian Embassy, through a crowd who, he thinks, must be jolly honoured to see him.

The layout of this panel, and the horrified looks on the faces of the New Yorkers he passes, provides a rather neat counterpoint to the similar scene at the end of Doom's origin story, when he strode past a crowd of his adoring subjects.

Over at the embassy the Latverian ambassador is denying ludicrous rumours that the Prime Minister is just a puppet, and that there's a secret "real" ruler behind the scenes. He scoffs at such obvious Fake News. "What were you expecting me to admit??" he says. "The presence of some mysterious tyrant who chooses to remain hidden from the world?? This is not a storybook kingdom gentlemen!" He then spots exactly that person in the shape of Doctor Doom entering a sideroom, and brings the meeting to a hasty close. 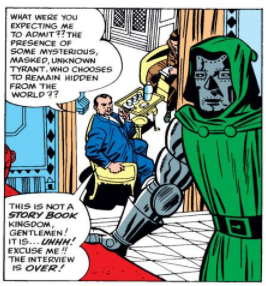 As well as being a great bit of fun, with Lee and Kirby openly mocking the cliches of their own story, it also follows on from the new reality set up in this issue's first story, with Doom as the ruler of distinctly storybook East European kingdom. Latveria was never mentioned before now, but already it feels a natural part of Doom's backstory and thus character. The only oddity about it is that Doom is meant to be the secret ruler, and yet hundreds of New Yorkers have just seen him march across town and, presumably, into the Embassy, like Nigel Farage popping round to see Julian Assange. Surely somebody must have put two and two together?

Doom immediately sets to work with his latest cunning plan by getting the ambassador to invite the Fantastic Four to a fancy reception, where they're due to be awarded a Scientific Fellowship. This leads to a gorgeous splash panel showing them looking a little bit uncomfortable being toasted by the gathered delegates. 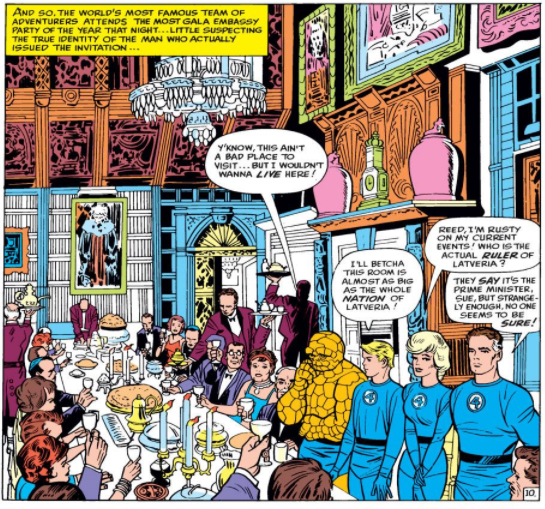 Doom's plan is to drug the Fantastic Four with a special "berry drink" that makes them believe whatever he desires them to believe - in this case making Johnny think that Ben has thumped him, and making Sue imagine she sees Reed being unfaithful. Johnny and Ben start a fight which, let's be honest, doesn't really require the assistance of mind altering drugs as it happens pretty much every month anyway, and Sue and Reed have a big argument, which... well, see above.

It's all part of Doom's plan anyway, and he takes a moment to savour the imminence of his final victory. Unfortunately his triumph soon takes a turn for the maudlin as he has a moment of self-awareness, wondering if beating his rivals will ever make up for what he's lost along the way. 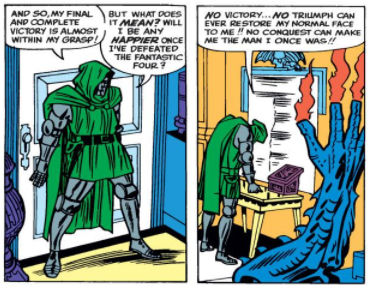 He looks at himself in the mirror and becomes so upset that he starts blasting the reflection with his laser gun. This disrupts Sue and Reed's fight, leading them to discover that Doom was behind it all along. 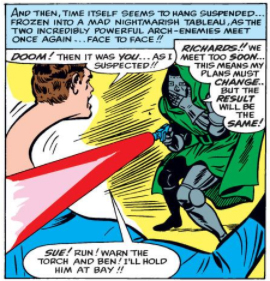 I've double checked, and this is definitely the first time that Reed has voiced his so-called suspicion that Doom was behind it all. He compounds this dickery with a heavy slice of misogyny, telling Sue she's "Not a fool, merely a female", before going to round up the rest of the team so they can take on Doom together.

They return to their headquarters to find Doom waiting for them, and a battle ensues which sees them fighting each other to a stalemate. Reed offers Doom the chance to fight him man to man in a battle of wits, which they agree to over a drink.

They strap themselves into "The Encephalo Gun" and commence a mighty battle of intelligence which ends, astonishingly, with Doom triumphant and Reed Richards cast into limbo forever! 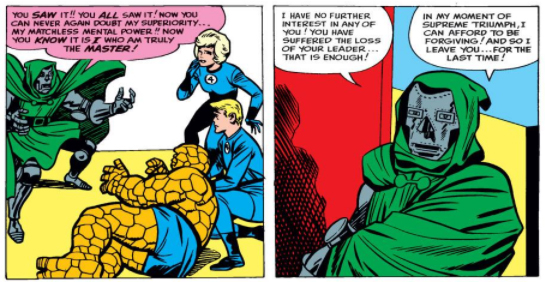 I guess we shouldn't be too surprised - after all, the story is called "The Final Victory Of Doctor Doom", but when he leaves we see that Reed is still there - the drink he gave Doom was exactly the same "berry drink" that had been use to drug the rest of the team earlier. Doom's victory was entirely illusory! Ha!

Ben wants to go and grab Doom before he gets away, but Reed points out that, as head of a foreign nation, he has diplomatic immunity from detention. I'm not sure if this is exactly how diplomatic immunity works, but it's another extra element of Doom's character that gets added here, and another bit of Marvel "realism" in that he now has a superpower that dictators have in our world too.

The final panel sees the Fantastic Four wandering what could have made Doom turn out as he has. "Perhaps, if we could ever learn more of is past..." muses Reed, apparently forgetting that they went to college together and he was heavily involved in a large part of his past. Maybe he should pick up a copy of this very comic and refresh his memory? 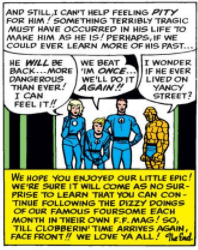 And thus concludes a story which addes tonnes of new detail, and new complexities, to Doctor Doom's character. Whereas the previous story told us about his past, this one delves deeper into the implications of his current status. It doesn't all necessarily make sense, but it will have huge repercussions for Doctor Doom in the future, setting the scene for an already popular supporting character to become one of the most interesting too.