The Battle Of The Baxter Building

This issue already has a lot to live up to, following on from the thrills of A Blind Man Shall Lead Them, and it ramps up the expectation even more with a splash page that is a) fantastically designed and b) erring very slightly on the side of immodesty. 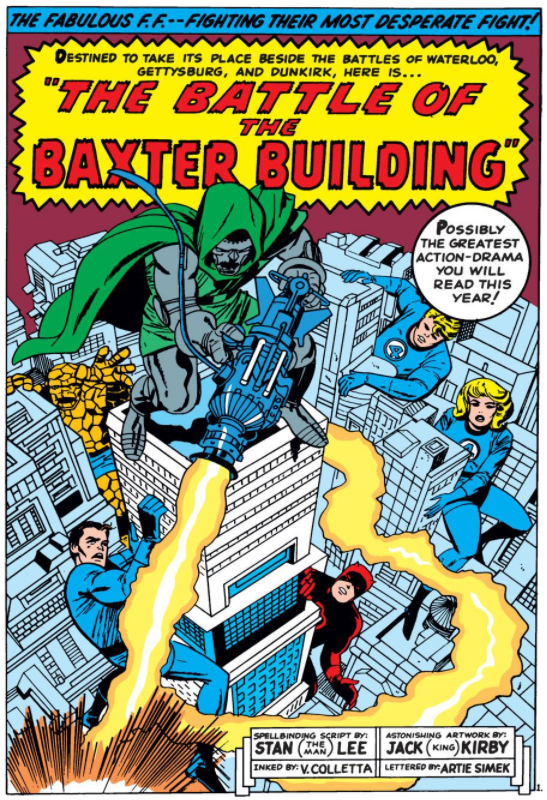 Let's take a moment to gaze in awe at this page. It's Lee and Kirby at the peak of their game, with utterly ludicrous descriptions that you can't help but be swept along with, coupled with incredibly dynamic character art full ofpersonality and bizarre technology. Surely the story itself cannot compete with a beginning like this?

I said last time that there hadn't been quite so much use of televisions as plot devices lately, but straight away we get one here as Doom uses Reed Richard's remote control TV eye to track down the Fantastic Four. 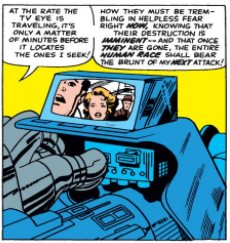 Doom is still referring to his own intelligence as "equal" to Reed Richards, rather than greater as he will in future, but his link to Latveria is now set in stone. He even wonders if he's remained there too long, "unconcerned about the rest of mankind".

Daredevil continues to protect the powerless Fantastic Four from Doom's attacks, allowing Reed, Johnny and Sue to regroup inside the Baxter Building, which has been sealed off by police to allow them to fight without hurting bystanders. Daredevil makes his way to the laboratory and commences a fight with Doom which gives the FF, soon joined by Ben Grimm, to make their way upstairs. Jack Kirby makes this whole process thrilling, constantly cutting back between the fight and the perilous journey upstairs, as Reed attempts to protect his colleagues from his own inventions while Daredevil tries to keep Doom busy. 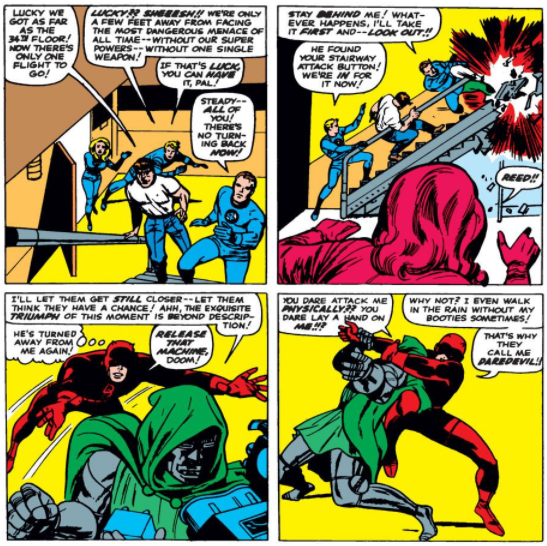 There's a noticeable lack of text descriptions in this sequence - previously you might expect boxes saying "Meanwhile in Doom's lab" to tell the reader exactly what's going on, but as the pace picks up Stan Lee, for once, drops the verbiage and allows the images to sell the story. This speeds things up considerably and, again, demonstrates the pair of creators acting as a coherent team.

That's not to say there's no text descriptions - Lee can't seem to hold back from explaining things for long - which does lead to a rather odd moment when Doom does not recognise the de-powered Ben Grimm. 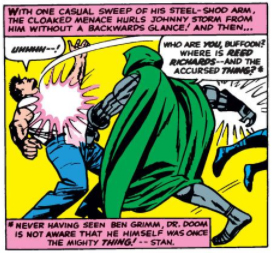 There's a footnote to underline that Doom does not recognise Ben in human form, but we already know that Doom was at college with Reed Richards, and that Reed and Ben were friends at the time, so surely that wouldn't be the case? It makes me wonder whether Lee realised that this didn't make sense at the dialoguing stage, and sought to paper it over with a footnote.

While all that goes on Reed Richards digs out another one of his devices, a power stimulator ray gun that can restore their powers. Here we see the continuity of the series being used to great effect - this is not just some random device that the creators have dreamt up to finish the story (as they've been known to do before) but an item already established a few issues ago in, according to the handy citation given, Fantastic Four #37 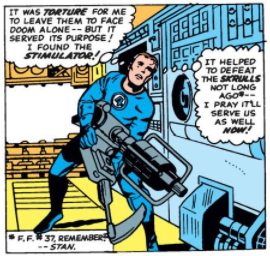 The references to previous adventures are coming thick and fast, as with the previous issue, not just reinforcing the idea of a coherent universe but using it to enrich stories, and get them told quicker too!

Reed, Johnny and Sue get their powers back, and with Daredevil's help manage to fight Doom to a standstill. He escapes up to the roof, leaving Ben Grimm to face a terrible choice - in order to defeat Doom, he must reinstate his powers, and in the process lose his humanity! 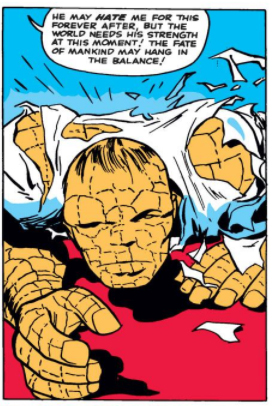 This is a timely reminder of the fact that The Fantastic Four, and indeed all Marvel characters, are not the same as the old heroes that came before. They don't necessarily want to be superheroes, and they always have to face a price for their abilities.

Doom, meanwhile, has gone to set up his final piece of villainy - a time bomb which will "destroy everything in sight". It's not entirely clear what he hopes to achieve with this, except for ensuring that "the name of Doctor Doom shall forever live in infamy." It's a harking back to his roots as a conventional supervillain who just wants to destroy things, rather than the complex, intelligently motivated, character that he's becoming. 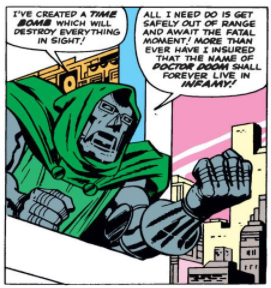 There then follows a five page sequence of Doctor Doom and The Thing fighting each other, in which Victor's technological skills and intelligence are pitted against Ben's brute strength and determination. The fight swings back and forth between them, with neither willing to give way, and Doom especially unwilling to countenance the idea that brawn could ever beat brains. 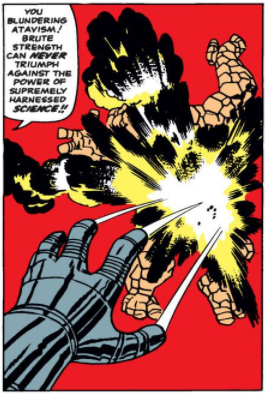 I had to look up the word "atavism" there, to find that Doom, or rather Stan Lee, is using it correctly. As I always say to anybody who'll listen (and plenty who stopped listening long ago), I learnt most of what I know through reading Marvel Comics, especially in terms of vocabulary - they're good for you!

Eventually Ben's determination wears Doom down, in an example of recurring theme in superhero comics where determination is the main virtue, with overwhelming odds only overcomable by sheer force of will. The most famouse instance of this comes in Amazing Spider-Man #33, published six months later in 1966, in the endlessly referenced scene where Spider-Man talks himself into lifting impossibly heavy machinery that he's otherwise trapped beneath. 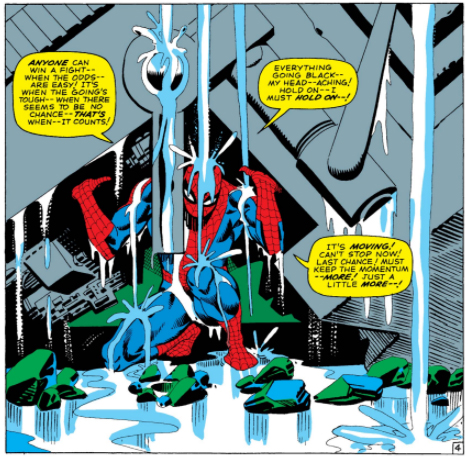 Ben's selfless determination wins the day here too, with Reed Richards having to step in to stop him going all the way and killing Doom. 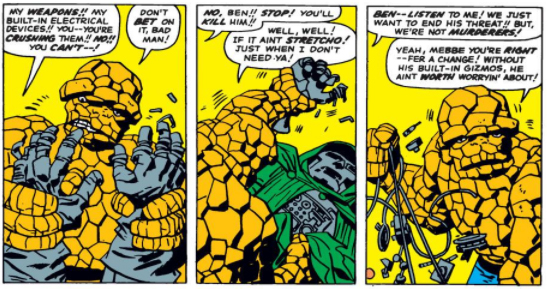 This is pretty heavy stuff - one can't imagine Superman having to be talked down from murdering somebody (at least not in comics anyway), and Ben's reasons for stopping are not exactly in the classic hero mode either, saying he's only stopping because "without his built-in gizmos he ain't worth worryin' about!" This isn't quite true - it's been established since his first appearance that Doctor Doom is a master of both magic and science, although the magical aspect seems to have faded away somewhat in this story. We shall have to keep an eye out for its return in future!

We're on to the final page of the story now, with all loose ends needing to be wrapped up at lightning speed. Where previous stories have felt like the ending's been tacked on at the last minute, here it's the culmination of plot lines from this story and the universe as a whole.

Doom's defeat is not the complete victory we might have hoped for. As he crawls away Reed reminds us that he cannot be taken into custody because, as previously established, he has diplomatic immunity, but that the crushing of his ego should be enough to ensure their safety for now. 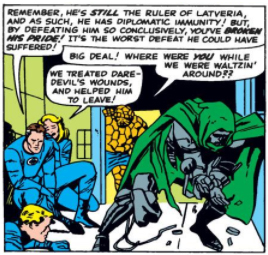 Doom has a long history of escaping at the end of these stories, but where previously (and repeatedly) he would fling himself out of a window or into the infinity of space, this time he is able to limp away, utterly defeated. Reed suggests that he may never recover from being beaten so soundly, but I think that those of us who have been watching Doom's development will suspect that it will only increase his resentment, and determination to try again. 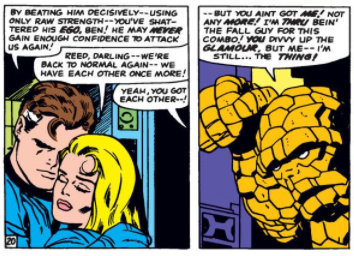 There's still more story to come though as, in a panel that proudly displays Kirby's long history in Romance Comics, Reed and Sue rather tactlessly declare their happiness that things are back to normal, only for Ben to point out that his situation is exactly the opposite. On the final panel he tenders his resignation from the team (not for the first time, and definitely not for the last), reminding us again that this is not your conventional superhero story.

Massive fights, overwhelming odds, revolutionary storytelling techniques and a determination to change the way these sort of stories are told, all tied up with a creative team at the height of their powers - at the start of this I accused Lee and Kirby of immodesty when they said that this was "possibly the greatest action drama you will read this year", but now I'm wondering if they might have been right?