Lo! There Shall Be An Ending!

A very brief appearance by Doctor Doom in this one - it's a cameo, but for the first time it's not someone else remembering him, or a statuette, but Doom himself, demonstrating that the Marvel Universe has definitely become a single ongoing story rather than a series of one-offs.

This issue is the final part of a three-issue storyline about Ben Grimm being taken over by The Wizard and The Frightful Four, carrying on directly from the storyline covered last time, where he was forced to become The Thing again to defeat Doctor Doom. Distraught about what has happened he wanders off and is captured by The Wizard who uses his ID machine to activate Ben's darkest thoughts. 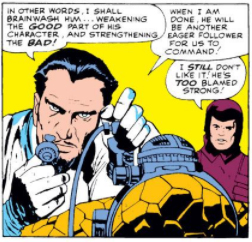 The Wizard says that this is "brainwashing" him, but surely that's when you put new ideas into someone's head, rather than emphasising existing ones? Anyway, what happens is that Ben realises how much he hates Reed Richards and how much he likes smoking cigars. He smokes a LOT of cigars in this story. 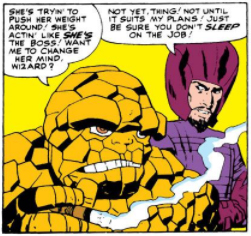 The Frightful Four (who surely should be Five now?) bicker amongst each other, Johnny Storm goes undercover (badly), Reed Richards gets trapped in a jar, and Sue faints after rescuing him. It all ends up with Reed trying to de-brainwash The Thing, in an operation which could easily kill him.

The lighting in this image shows Reed in proper Mad Scientist mode, because that's basically what he is - rather than deal with the very understandable feelings of his friend, who was been turned into a monster by ill-thought out Mad Science, he is using MORE Mad Science to try and wipe it from his brain, while risking death if he should make another error. It all works out in the end, but this is one of those occasions when one sympathises with those who think Mr Fantastic is just the tiniest bit arrogant.

Which brings us nicely to Victor Von Doom, who we see halfway through the issue recovering in the Latverian embassy from the wounds inflicted last time we saw him.

I'm going to stop going on about Latveria soon, but it's very noticeable that Latveria is now always mentioned in pretty much the first sentence of his every appearance. It was introduced less than a year ago, but now it's a core part of Doom's character.

We discover that Doom is still in pain, and must wait a few days before he can use his Emotion Charger to take revenge. He then looks out of the window to see that something's going on at The Baxter Building... and we're back into the main story again. 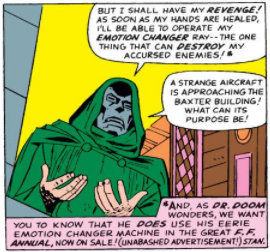 This three panel sequence has absolutely nothing to do with the rest of this issue, and thus it shows how important the ongoing Marvel Universe has become, and how the idea of a "done in one" story has been completely rejected. It also shows the economic side of the development of continuity - usually the footnotes tell readers what issue they need to go back to to check something, here they're told that they can find out what Doom's Emotion Charger does in Fantastic Four Annual #3, out now!

This, of course, is a heinous mis-use of ontological security to promote purely mercenary motives, and is something I would never condone. "But does it work?" you may ask - you can find out yourself, in the NEXT Marvel Age Doom Blog, available later this week!