What a mighty moment in Marvel History this is! Today we're looking at episode 12 of the "Prince Namor the Sub-Mariner" section of "The Marvel Superheroes", a cartoon produced by Gantray Lawrence in 1966. It's the first appearance of Doctor Doom on screen! The first TV appearance of the X-Men too! All as part of a thrilling, half-hour long show that played nightly on TV stations all across America!

There's only one tiny problem with it: it's BLOODY AWFUL.

I hope you'll excuse my distinctly non-academic language here, but the thing is that I had to sit down and watch the whole episode, and there's not really any other way to describe it. Here, see for yourself:

The oddness of these choices does fit in with the general tone of the cartoon, which feels as if it has been chucked together in an insane rush using whatever comes to hand. It's like listening to a four year old making up a story as they go along, but without the charm. One example of this thoughtless chuck-it-together-ness comes right near the start Doom when talks about plotting against his enemies The Allies For Peace (more on them in a moment) as a way to be avenged for "the humiliations of the past." This is a direct lift from his dialogue in Fantastic Four Annual #3, referring to his defeat by The Thing in his previous appearance. In the comic this made sense because we knew what he was referring to, and it involved characters that had appeared before and would appear again soon, but in the cartoon this is Doom's first ever appearance, so we have no idea who he's talking about and, anyway, it will never be mentioned again. So what was the point of including it, other than not wanting to bother writing new dialogue?

One might argue that this is a great example of transmedia storytelling, with the audience already knowing Doom's history from reading the comics. Unfortunately for anybody trying to write a thesis about Doctor Doom as an early transmedia character (i.e. me), that's not what this is. The cartoon makes many references to the orginal comics (which today would be called "Easter Eggs") that only comics readers would understand, while simultaneously changing huge plot points, characters, names an situations so that this story could not possibly exist in the original Marvel universe storyworld.

A good example of this comes when Namor (who narrates the first half of the story without appearing in it) introduces us to Doctor Doom's lair, "The fortified isle of Latveria" 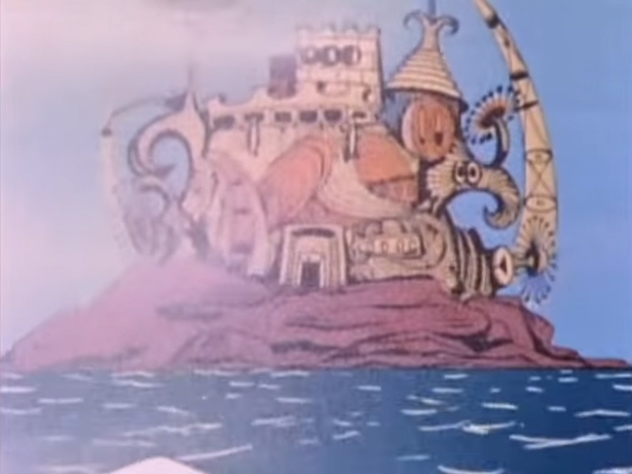 This is not the small Balkan country we've come to know and fear from the comics! I can sort of understand making Doom's lair water-themed to match Namor being an aquatic character, but Namor isn't in this section, and Latveria is never mentioned again, so what on earth was the point?

And then there's the main protagonists of this section, the X-men - or, rather, The Allies For Peace as they are renamed here. The characters are the same, including Professor X, and they even have an "X" on their uniforms, so why the change? 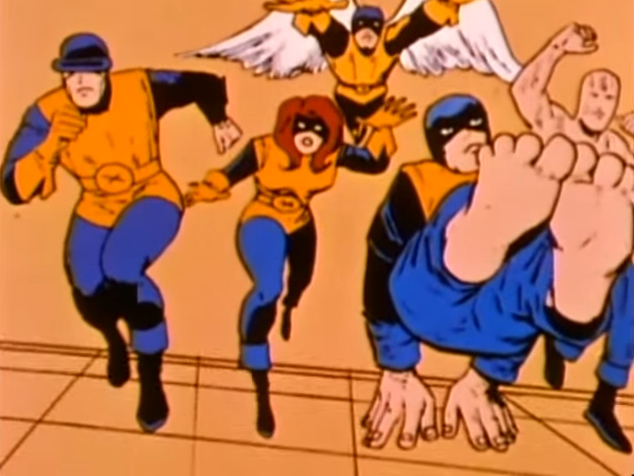 Actually, I say they're the same, but for some reason Hawkeye joins them in the second section of the story. It all reeks of a half-arsed carelessness which pervades all aspects of this production. The "animation" consists of taking photocopies of the original artwork and, for the most part, animating the mouths. The fact that the art has been taken from different comics, different artists and, in the case of the Sub-mariner, different decades, gives the whole thing and queasily inconsistent look, as characters change design from frame to frame. Here's two very different versions of Iceman, for example:

The storytelling is similarly hopeless. Although the episode is called "Dr. Doom's Day" the words "Doctor Doom" are not even spoken until almost eight minutes into the story, when Doom is finally named. Anybody new to the cartoon would have no idea who he was, although when he finally say who he is he does very helpfully point at himself to make it absolutely clear. 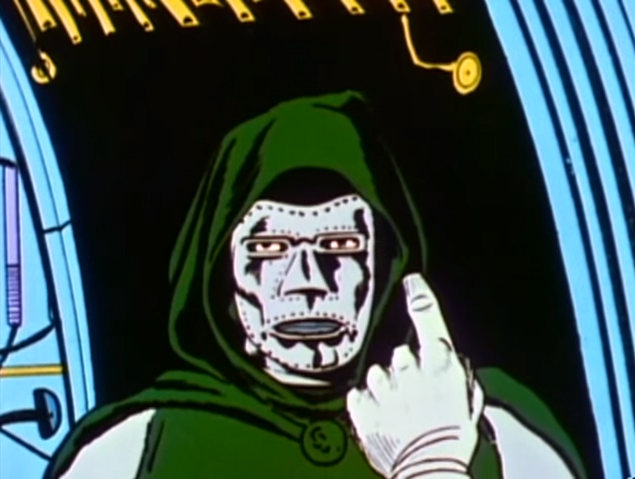 This introduction takes place in the second section of the show, where Namor finally appears and heads into New York as the adaptation switches to Fantastic Four #6. Again, The Allies for Peace stand in for the Fantastic Four, although the animators did not manage to remove all references to the FF, notably when their logo appears on the building scanners. 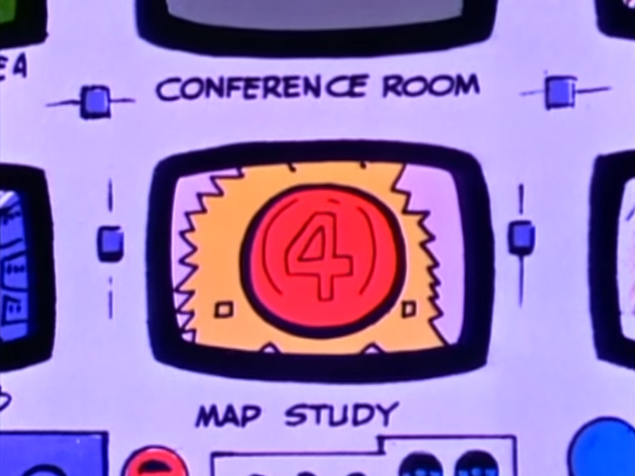 At the point Namor takes over from the Allies (or "The Defenders" as the narrator inexplicably calls them at one point) as the main hero, while Doom becomes more straightforwardly villainous, spouting dialogue that he would never say in the comic, even stooping to puns when he puts the Baxter Building on a collision course with the sun "which I am certain will receive you warmly." This is not the Doom we know!

The episode continues to get (even) worse, including an section where the narrator tells us that, millions of miles away, a meteor storm has erupted. "That meteor storm is what I'm counting on!" says Namor immediately afterwards, making me think of the bits in Dangermouse when they'd talk back to the narrator... except much less funny.

The all round can't-be-arseness of the episode reaches a climax towards the end, where it's clear that the foreground for Doctor Doom's slipped during animation, and nobody could be bothered to fix it! 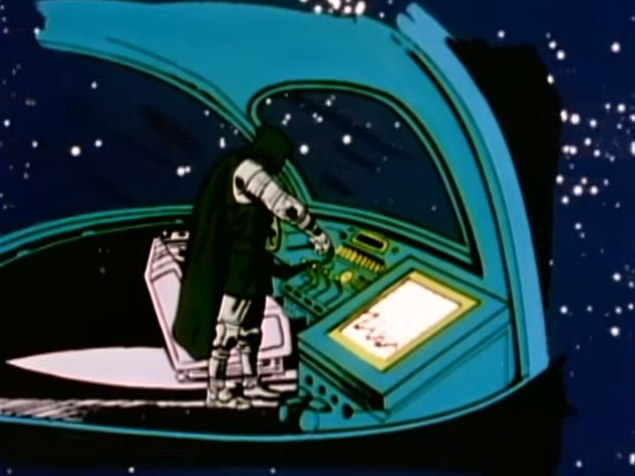 It finally ends with Doctor Doom chucking himself out into space, which is at least traditional. All in all, it's a dreadful business which makes you very glad that at least Stan Lee has lived long enough to see his creations done properly.

One extra, intriguing, aspect to this series of cartoons is the fact that WNAC-TV in Boston made a series of short live films introducing the cartoons, written by none other than Jerry Siegel and featuring Captain America, Hulk, Bucky and Doctor Doom! The only film that survives is the short clip below, taken by a fan on a super-8 character, but even this low quality recording shows more of an understanding of Marvel's appeal than this terrible cartoon:


Basically, I did not enjoy this one very much, but fear not true believers, next time we're back to Stan Lee, Jack Kirby, and an out and out classic!