Right then! After all the prevarication in The Dismal Dregs Of Defeat last time, surely now we finally get to see Doctor Doom actually use his newfound Power Cosmic to wreak havoc on the world? Right?

Wrong! What we get in this issue is an awful lot of people preparing for Doom taking over the world, a whole heap of Doom claiming he's definitely going to get going soon, and a great chunk of story about the Inhumans which has nothing at all to do with the main plot.

The Inhumans stuff is all part of the long-form storytelling that Lee and Kirby are developing, and will eventually intersect with the main Fantastic Four storyline in several months, but at the moment it feels a bit like the pages of the comic have been shuffled so that a back-up strip has got mixed up with he main one, like 'Tales Of Asgard' getting stirred into the main 'Thor' strip. It's all good stuff - I especially like the way that Maximus The Mad's long-held plan of taking over Attilan when Black Bolt's away fails straight away because everyone knows he's nuts - but doesn't have anything to do with Doctor Doom. 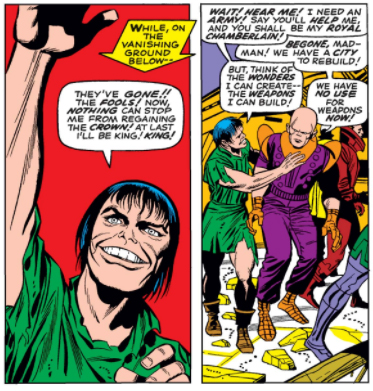 The main story kicks off with Mr Fantastic trying to persuade the entire world to band together to fight "perhaps the most deadly enemy which civilised man has ever faced!" Reluctantly the US agree to hold back so that the Fantastic Four can try to stop Doom, but begin preparing their army just in case they can't. They call this "Operation Build-Up" which is quite a good description of this issue as a whole! 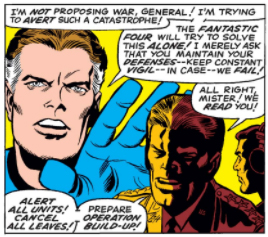 Mr Fantastic remonstrates with himself ("Mr Fantastic! What a monumental mockery that name is!") for having no idea how to defeat doom, so The Thing decides to get him back on track with a good old fashioned punch-up. As usual, this works a treat and Reed Richards heads off to his lab to get some serious thinking done. 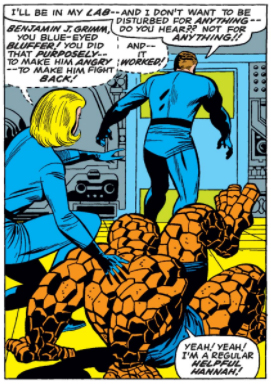 I wonder if Lee and Kirby ever tried this method themselves, when one of them was feeling a bit low? It seems to get used a lot, although it does have its drawbacks. The idea that Reed comes up with to defeat Doom is a gadget that he decides to test by chucking it at his old friend Ben when he's not looking. The device floors the Thing and makes him furious, only for Reed to claim (as is his wont) that this was his plan all along. 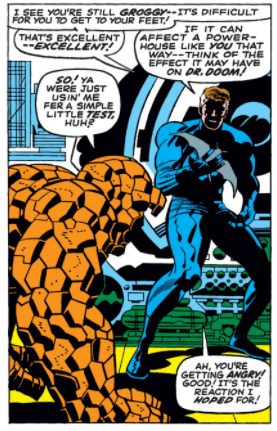 If someone threw an infuriating/knackering device at me without warning I would take a pretty dim view of it, as Ben does here, and would not be inclined to believe that it was the "only" way to test it. It makes me wonder about the collaboration between Lee and Kirby on this section - the images, and indeed the plot, could easily tell a different story, with Reed Richards still angry at his friend for the earlier beating and taking his revenge with the device. Could it be that that was what Kirby originally planned?

While all this is going on Doctor Doom is busy enjoying his newfound powers, while also pretending that he is now super-dignified and above such pettiness. When we first see him he's just foiled an attack on Latveria by the Soviet Union, destroying their airforce with a corrosive cloud. For a moment he considers taking further revenge, but then decides not to do so, because such acts of anger are now beneath him. 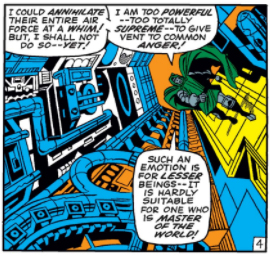 Throughout Doom's development his self-delusion has always been a key part of his character, and it's clearly demonstrated here by the way he calmly, regally, decides not to give vent to his anger, preferring instead to pop down to the cellars for a good old gloat (he does love to gloat) over the helpless Silver Surfer, and then giving him a good kicking, in an entirely calm and non-petty way. 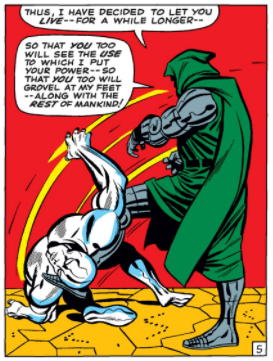 Again, he decides to let the Silver Surfer live so that he can witness Doom's (eventual) takeover of the world, much as he claimed to do with the FF last time. It's almost as if he's been putting off the moment when he has to really use his newfound powers, and it seems like he realises this, saying "I have tarried with you long enough!My greatest task now lies before me!! I must prepare a hopeless humanity for the coming of --"

But then what he does is fly off and, for all intents and purposes, play pranks on people. First of all he goes to Central Europe and casts an entire country into total darkness for 24 hours, then buzzes over to the Aegean and makes it snow, before finally turning a gorilla into a monster... for some reason. It's all most perplexing, to the extent that you want him to GET ON WITH IT and start taking over the world.

This might make for frustrating reading, but it is very much in character for Doom who has, time and time again, put off actually using his power, preferring to just enjoy using it for a bit.

The story ends with Doom deciding that now, at last, there's "no need for further delay" and he can finally start taking over the world.

He keeps on saying he's just about to take over the world, but maybe this time he really means it! There's only one way to find out - in our next blog!