The Peril And The Power!

The cover for this issue promises a gigantic punch-up between Doctor Doom and The Fantastic Four but, after several issues of delay and prevarication, is that really what we're going to get? Or will it be more of the same hanging around, waiting for something to happen?

The splash page doesn't bode well for Action Fans, with Sue, Reed and Ben powerless to stop Doom from continuing to mess around with his powers, despite having said he was going to get ON with taking over the world at the end of the last issue. Instead of doing that he's decided to stick a cruise liner on top of a cliff for no apparent reason. 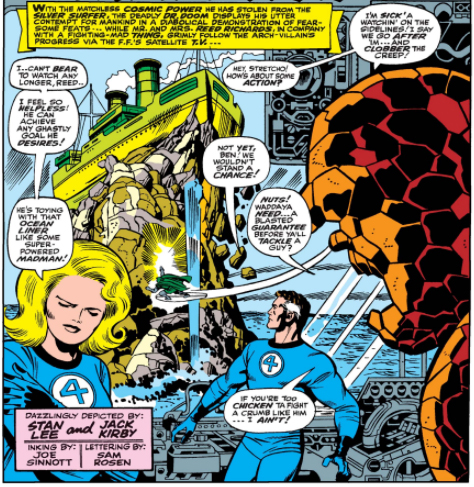 I can't help sympathising with The Thing here. I too am "sick 'a watching on the sidelines! I say we go after 'im... and clobber the creep!"

Mr Fantastic wants to wait some more, but luckily for the readers the Human Torch has decided enough's enough and has zoomed off to fight Doom himself.

It does not go well. Doom turns himself into diamond to avoid Johnny's flames, flies out of his way at high speed, and then creates a typhoon to throw him into a "wondrous whirlpool" before taking a moment to pose groovily with his board to consider his work. 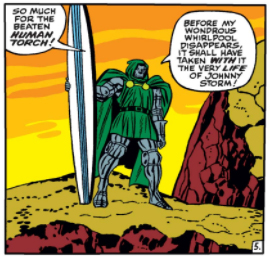 The long awaited action continues with the rest of the FF trying to attack Doom. On the way they have to battle though several natural defences that he throws up, including gigantic moving trees, burning earth, and flying rocks before - eventually - The Thing reachs Doom himself where the long promised punch-up finally happens. 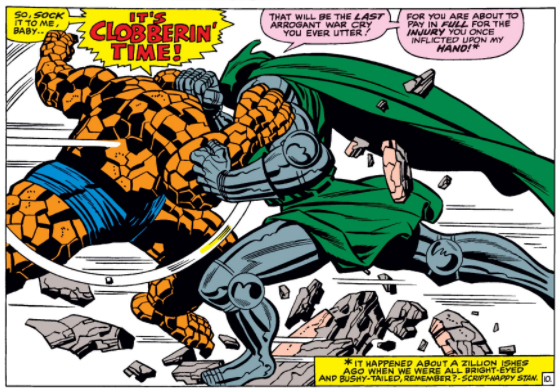 It's been a long time coming, but a panel like this, all Kirby action, flying catchprases, and footnoted continuity, make it worth the wait. Doom is, brilliantly, still annoyed about the fact that it was The Thing who defeated him when last they met. When he's beaten by Reed Richards he doesn't seem to mind as much, as that's two equals in a battle of wits. Being beaten by a "regular joe" like Ben Grimm, through phsyical violence, clearly wrankles, and it's great to see that this is carried through in his characterisation. For all my (gentle!) mockery of some of the storytelling, the understanding of Doom as a flawed, three dimensional character in these comics is great.

The rest of the Fantastic Four regroup and go to help Ben, who is being thoroughly walloped. Doom takes delight in the fact that even though the four of them are back together at full strength he is still able to beat them all. 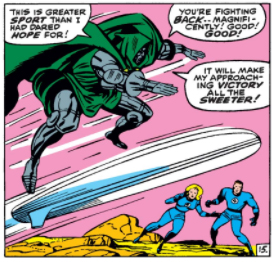 The battle continues, with the most effective attack coming from The Invisible Woman, who manages to make an entire cliff invisible so that Doom crashes headfirst into it, but eventually they are defeated. "Your feeble efforts at self-preservation have ceased to amuse me" says Doom. They've been amusing him for almost four months now, so it's no surprise that it's not as much fun as it used to be, and he decides it's time to finally, finally, at long last, disintegrate his enemies. 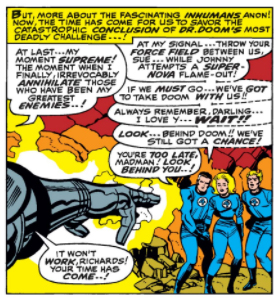 But wouldn't you know it? At just that moment the gadget that Reed was trying out on The Thing last time - the "anti-cosmic flying wing" - zooms out of nowhere and knocks Doom off his feet.

Doom simply gets up and back on his board but, as predicted, is absolutely ruddy livid about the whole thing and decides, yet again, to demonstrate his contempt for Richards by not killing him but instead going after the wing thing to destroy it. To be fair to Mr Fantastic he did say that making Doom angry was the whole plan, and it succeeds as he follows the flying wing up innto the sky until - 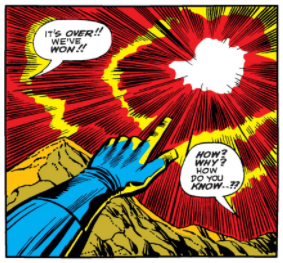 Doom flies so high that he bashes into the cosmic barrier that Galactus had set up to stop the Silver Surfer escaping the earth!

On the one hand this is a sudden, slightly disappointing, end to a four issue storyline where the reader (or this reader anyway) has been desperate for Doom to stop messing about, start taking over the world, and for the FF to start fighting him. On the other hand, however, it's a pretty amazing use of an ongoing continuity, relying on readers' knowledge of what has gone before, tied to an understanding of the characters' well-established personalities, to pull out an ending that makes complete sense. We all know about the cosmic barrier because it was such an important part of the previous storyline, and we can accept that Reed Richards was banking on Doom's anger and arrogance because... well, that's exactly the sort of thing that Doom would do!

And that's it for this four part storyline, with everything coming to a sudden halt without any explanation of what happens to Doctor Doom. We see his board flying off towards Latveria (and the next issue of The Fantastic Four shows the surfer getting it back) but readers at the time would have to wait almost a whole year to find out what happened to Doctor Doom!

Readers of this blog, at this time, will only have to wait a couple of weeks, as next time we'll be taking a small detour into the world of the (surprisingly enjoyable) Hanna Barbera adaptation of The Fantastic Four!