The Way It All Began

Growing up in Peterborough in the 1970s we didn't get any of the exciting television shows. The 'regional variations"'section of newspaper TV listings was agony for me, as I'd look longingly the scehdules for Yorkshire or LWT which had all kinds of thrilling-sounding kids' shows on during weekend early mornings, where all Anglia had was lots and lots of programmes about farming. It was even worse when I started reading American comics, with their full page advertisements for the kids's shows on NBC and CBS. There seemed to be hour after hour dedicated to cartoons like 'Space Ghost' or 'Super Friends', it must have been amazing!

What few shows we did get - like 'Battle Of The Planets' or 'The Space Sentinels' - were thrilling at the time, but when I saw them again decades later I was disappointed to find that they were either nonsenical, in the case of Battle Of The Planets (for very good reasons), or bland for the Sentinels. However, this disappointment was nothing compared to horror of finally seeing some of the cartoons I'd hankered after, like the dreadful 'New Fantastic Four' featuring HERBIE instead of The Human Torch, or the utterly awful The Marvel Superheroes, so when I reached the point where this blog would be looking at Hanna-Barbera's original 'Fantastic Four' cartoons, I wasn't exactly looking forward to it!

I was thus rather pleasantly surprised to find that, actually, they're all right! They're not exactly 'The Incredibles', but they're not bad, and unlike The Marvel Superheroes they give the impression that someone had at least tried to make a good job of them so that, despite occasional lapses into blandness, they were perfectly pleasant to watch.

Put that on a DVD cover, you'll sell a million!

The first episode of the series to feature Doctor Doom is 'The Way It All Began' which tells, quite appropriately, the way it all began. It kicks off with Doom flying towards New York in a massive aircraft and setting off "the rallying signal of The Fantastic Four". We get our first glimpse of the Hanna-Barbera Doom here, and he looks fairly similar to the comics version. A bit more robotic maybe, with a different coloured tunic, but all in all fairly close. 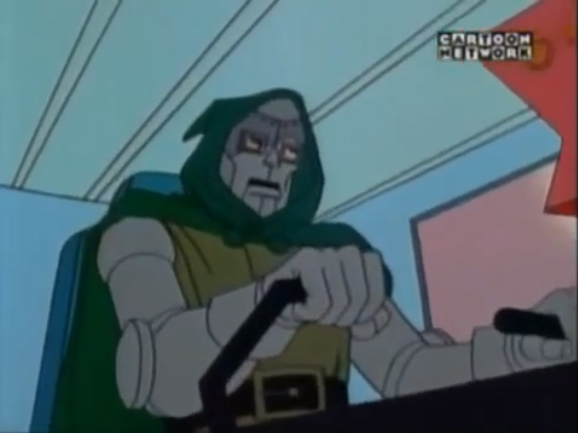 Next we get a sequence not dissimilar to the start of Fantastic Four #1, with all the team members seeing the flare and rushing to the Baxter Building. Weirdly, the Thing seems to be standing around just watching a building being knocked down. When he sees the flare he's disappointed, but helps out by knocking the building down himself.

They arrive to find that Sue is chatting to the police commissioner who has come to warn them that "the dreaded international criminal" Doctor Doom has touched down at International Airport, but has claimed diplomatic immunity as "the reigning monarch of the principality of Latveria." This again sticks pretty closely to the comics, though it's unclear, once the episode is finished, why this was mentioned as it has nothing to do with anything that happens later.

At this point no-one knows what Doom is up to or where he's heading ... until he rings up to tell them. 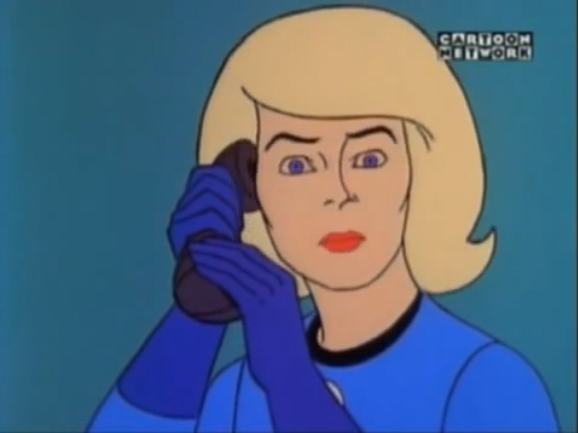 He calls to say that he's come to take his revenge on Reed Richards. This is obviously confusing for the police commissioner, which leads rather neatly into Reed explaining by telling him the first part of Doom's origin. This runs pretty closely to the version told in Fantastic Four #5, except for some reason Doom has blonde hair. 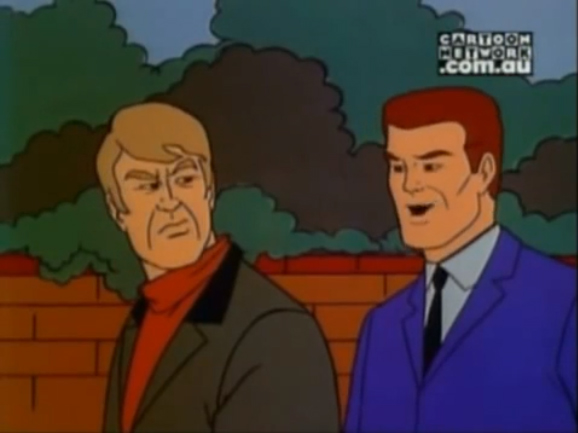 "He gives me the creeps" says young Reed. We then see his and Ben's first meeting, at which point the "now" version of Reed says "Anyway, as for Victor Von Doom, he *got* his private room", despite the fact that this is the first time it's ever been mentioned. As with The Marvel Superheroes it seems that the script writers are taking dialogue directly from the comics without checking it still makes sense in their new version.

This version of Doom is still undertaking dangerous experiments. Reed points out that his calculations are incorrect, but Doom carries on anyway and, as expected, it all goes horribly wrong. What happens next is very similar to the comics, except that his assistant not only gets a name - Carstairs - but also some attention from the Dean, who expels Doom for almost killing him. It's an addition to the original storyline that makes his expulsion seem more understandable.

Next we see an example of terrible unprofessionalism, as Doom's nurse takes off his bandages and screams in horror. 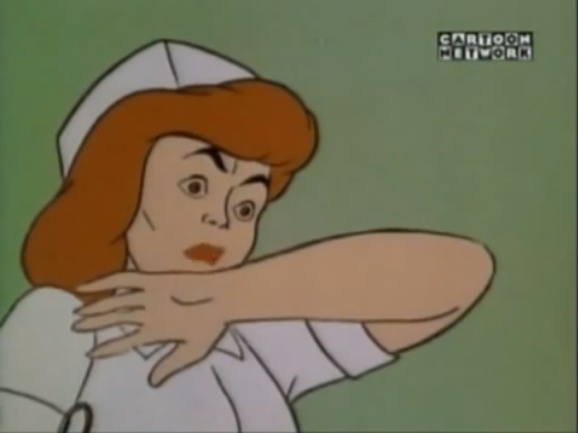 "How horrible," she shrieks. "That face!" I'm no expert, but I would have thought that "Not screaming in horror" should have been covered in training.

Doom agrees, and instantly knows who to blame. "This is all Reed Richards' fault! He made me hurry my experiment," he says, which is slightly more explanation than we get in the original comics, and is another change that adds to the sense of the story.

"After his face was ruined he just seemed to disappear," says Reed, who then goes on to show off about his and Ben's lives post-Pearl Harbour (which actually gets shown briefly) as an agent of the OSS and a fighter pilot called "The Grimm Reaper" respectively. I know that in the comics they both fought in the second world war, at least in the early years, but I've never seen Ben named as "The Grimm Reaper" in this context before.

This leads on to a re-telling of the Four's actual origin, which gives even more background on how they all came to be aboard the ship. Once again this re-telling changes the comics version so that it makes more sense, with them not having to actually steal the rocket, and clearer reasons given for each of them being there, such as Sue as Data Recorder and Johnny as General Crew Member. This is the first time that the origin story is re-told, smoothing out some of the oddities of the original version, but also losing some of the edginess too. Ben Grimm has no self-pity here, for instance, agreeing to use his powers to fight evil as readily as the others, "for the good of man!" 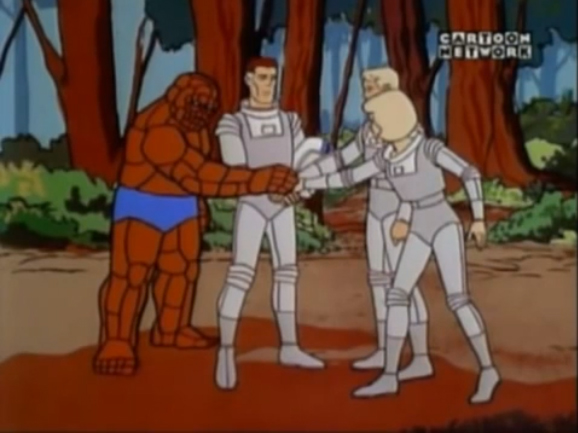 They all get quite distracted with their storytelling, and the police commissioner is too polite to point out that this is not what he came here to find out. Luckily for all Doctor Doom turns up at the front door at that very moment, to get us back on track. 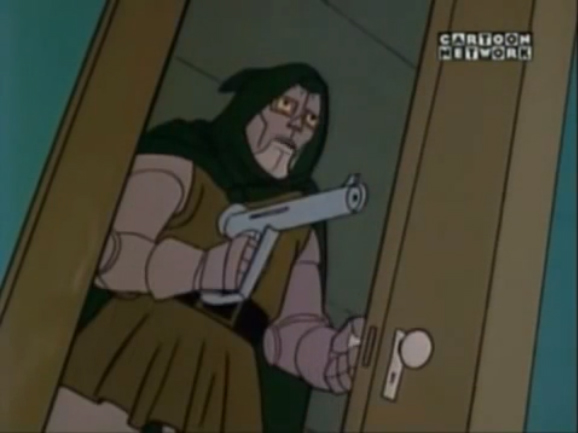 He's been stood outside listening to their story and, once he's got them all at gunpoint, offers to tell them the rest of his own origin. He sits down and tells a tale which follows the comics very closely, although the mask fits "in comfort" here, rather than scarring him further, which is probably to be expected for a Saturday morning cartoon.

"Soon I was ruler of a kingdom" he says, rather swiftly skipping over how he came to control Latveria. With the story told the Fantastic Four overpower him incredibly easily, with Mr Fantastic just snatching his gun away and Sue wriggling free and bonking him with a force field. It's all very very easy, weirdly so, leaving Doom to revert to his signature move of running away. 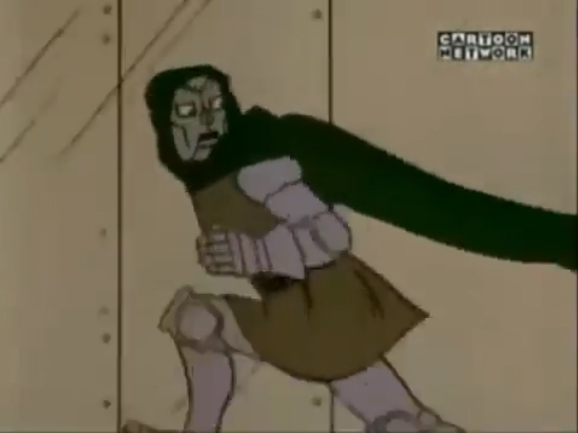 He runs for The Missile Room and steals a missile. "What a triumph!" he cackles. "Going home to my own country with the Fantastic Four's own missile!"

"What will Reed say?" asks Sue, but it turns out he's not too bothered. The ship has no gyro, and so Doom can't steer it, meaning that he only gets a short distance before exploding and, apparently, crashing into the city. 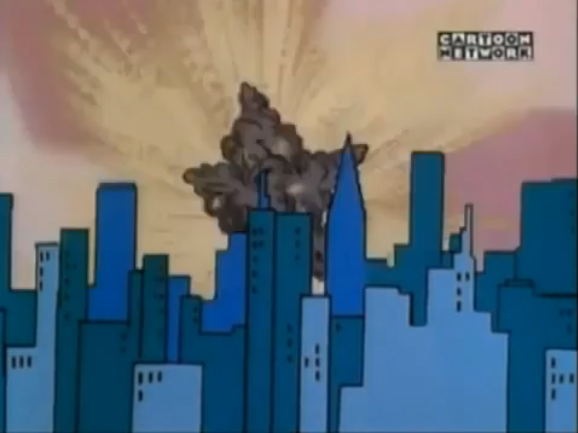 "I bet we won't see him again until... Doomsday!" says Ben, and everyone has a right old chuckle about it. This is a tiny bit strange, as they have just seen an old college acquaintance crash a missile into New York city, killing himself and who knows how many others. It sticks out as a misstep in what otherwise has been a surprisingly cogent version The Fantastic Four and especially Doctor Doom. Here he has definite motivation for his actions, and specific character traits such as an keenness to spy on others, no self-awareness, and a willingness to leg it at the first sign of danger. He's definitely a different version of the character from the one we've seen in the comics, but he's surprisingly faithful to the original!

The question is, will this version of Doom prove to be as impervious to death and destruction as his comics counterpart? We'll find out next time!