The Micro World Of Doctor Doom

The story starts with The Thing getting shrunk while carrying a piano down the street. In the original this happens at Alicia's house, but she's not in these cartoons so the action's translated to the street, which has the added benefit of increasing the opportunities for shrinking-based shenanigans. Similarly, the comic starts with each member at base relating previous occasions when they've been shrunk, but here we just see the shrinkages as they happen, which is a lot easier to follow.

Reed, Ben and Sue make their way back to the Baxter Building, still at miniature size, where they hear a voice say "Beware!" Unlike in the comics, the voice doesn't say "Beware Doctor Doom", which is probably to keep some of the mystery alive about who could be doing this to them... although the story is called "The Micro World Of Doctor Doom" and the titles of every episode do show a clip from this one, featuring a miniaturised FF fighting Doom, so I would suggest that that ship has probably already sailed.

A couple of minutes later Johnny arrives to find the others, as in the comic, about to be killed by the horrifying menace of air conditioning. As he's trying to save them the mysterious voice says "Beware Of Doctor Doom!" and we cut to the Micro World where Doom is already acting true to character by a) kidnapping a woman as a lure to capturing the Fantastic Four and b) watching the action from afar on a television screen. This time it's Princess Pearla, not Sue, but otherwise all is the same as usual. 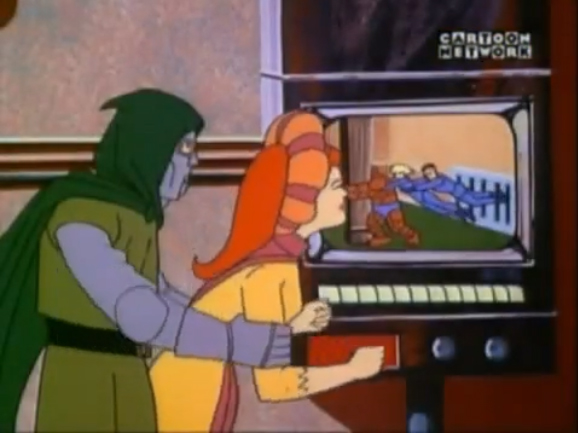 Once the terrifying threat of an air vent has been beaten, the FF clamber up a table leg to look at an atom in a microscope, and Reed reveals that all those student discussions at 2am were right - there are microscopic worlds at an atomic level! Far out! "It's quite possible that Doctor Doom could have ended up on some such atom planet or Micro World" says Reed, because of course it is. In the comics this at least had some logic to it, as we saw Doom being shrunken down on his previous appearance, but here's it's just accepted as Something That Could Totally Happen.

"A clever guess" says the watching Doom, who then shrinks the four further until they arrive to be welcomed in ... The Micro World Of Doctor Doom! 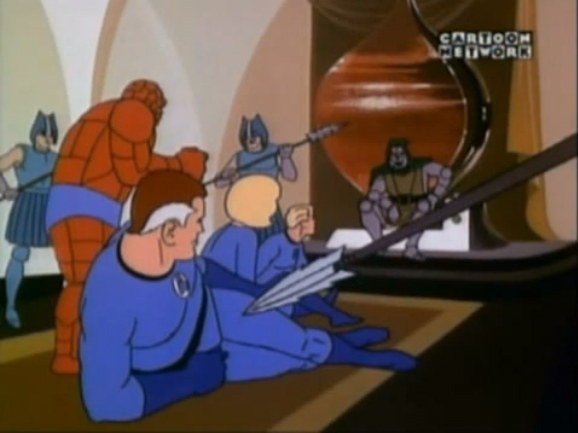 This leads to a big fight with the guards, which is ended when Doom uses his shrinking ray again to shrink them even further. With the FF powerless again, Doom asks Reed what he thinks of his power over size - seeking the approval of his arch-enemy as he always does. "Absolutely amazing" says Reed, conforming to his own character by appreciating his foe's genius. He then asks how he found the Micro Worlds and, again, as usual, Doom is happy to relate the story.

It turns out that this version of Doom was working on a shrinking ray, but rather than fall into it during a battle with The Fantastic Four he just sort of stumbled in front of it by accident. 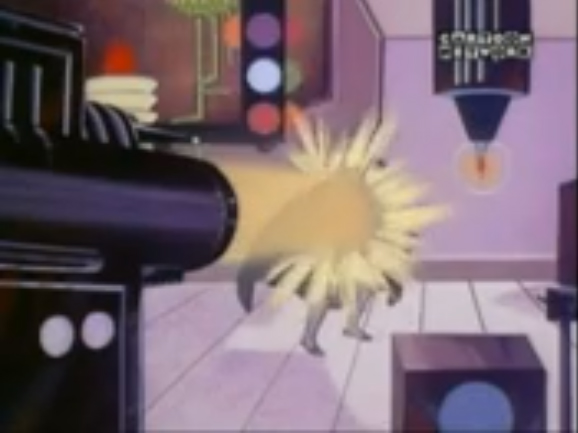 After that it's all much like the comics - he discovers a happy world, which makes him RUDDY LIVID, and preys on the natives' trusting nature to take control of the whole world.

The FF fight back, beating up the guards as they attempt to gain control of the shrinking ray... leading to Doom capturinng Sue (again) and gassing the others. They're then put in prison with the King and Princess Pearla, although unlike the original, this prison under a sea of acid is made of stone rather than metal.

It's at this point that the cartoon makes what I consider a brilliant decision - it shows us a LOT more of The Lizard Men Of Tok! Doom imagines the various uses the subdued FF members could be put to, and each time The Lizard Men appear in his mental image. The punishments are the same as the comics, even down to Sue's (much better) hairstyle when she's working in the kitchens. 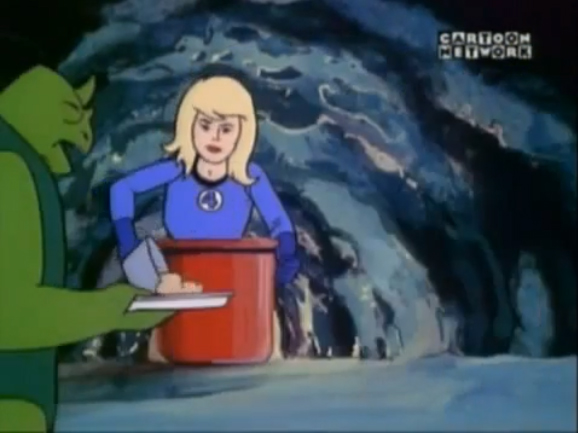 The Lizard Men arrive (in a much less cool looking ship than the Kirby-designed original) to swap some minerals for the four prisoners Doom has promised them. Meanwhile, down in the dungeon, the four tear some strips of rock off the walls to form an escape pod - sheets of metal made much more sense in the original, so I don't know why they changed it. Even less pleasingly, in this version it's Reed, not Sue, who comes up with the escape plan. Other than that things progress as before, with the four escaping with the King and Pearla.

They return themselves to normal size - or at least normal in the Micro World - and head off to the Royal Gardens to fight Doctor Doom and his new ally King Tok. They fight their way past the Lizard Men, and then when they reach the human (or whatever they are in the Micro World) guards they are surprised to discover that their King is alive, "Not dead as Doom said". It's a small addition to the original which handily explains how Doom took charge of an entire army so easily.

They burst in on Doom and Tok, having a delightul meal together. 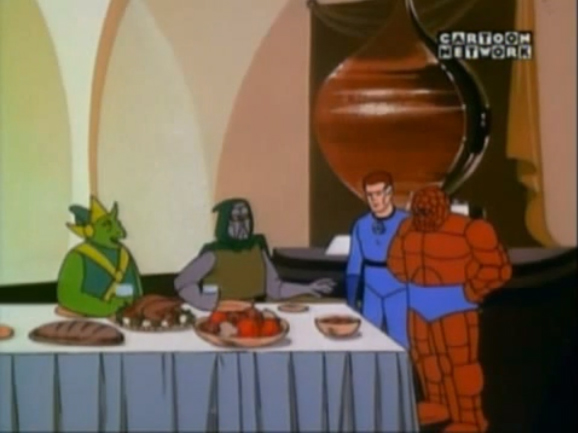 Doom plays true to character once again and legs it, leaving the Lizard Men to fight for themselves. 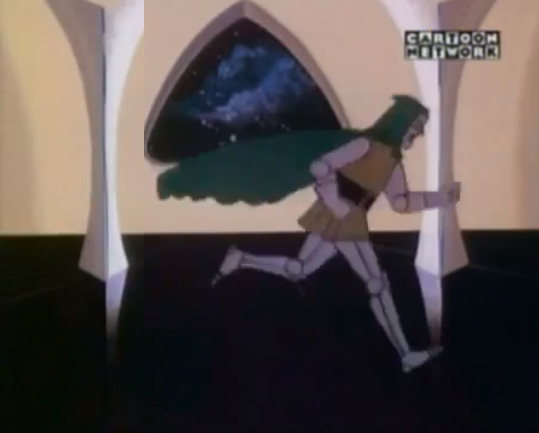 The FF use the shrinking ray to stop the Lizard Men - it's "quicker than fighting" - then rush outside to find King Tok trying to escape in his spaceship, which allows the Thing to re-enact his baseball practice from the original comic, whacking the ship out of the sky.

With that done they're about to head off to capture Doom, only for the King to inform them that he's already turned the shrinking ray back on himself to reverse the process and returned to his own world. "If that is so then our world is in imminent danger," says Reed, and they dash off to re-size themselves home.

When they get there, Ben points out that the shrinking ray tickles and has a good old laugh about it... and there the episode ends. In the comics the Fantastic Four did go off in the next issue to track Doom down, in a story that has already been adapted for a previous cartoon episode, but I guess the fact that these cartoons were in syndication, with no guaranteed order of broadcast, made that impossible. Instead they show a world much like the one described by Umberto Eco in That Essay Everyone Always Goes On About, where everything is returned to its original state. In the case of Doom, in this storyworld, that state is of always having just escaped from the Fantastic Four, and being liable to return at any moment.

Unfortunately there would be no return of Doom to the Hanna Barbera cartoons, as only one series was ever made. It's a shame - these may be simplified retellings of the originals, but they're well-made (for the most part) with at least some of the spirit of the comics still intact. The next appearance of the team, and Doctor Doom, in cartoon form would not be for another eleven years, in the (much less faithful) "New Fantastic Four" series, and it really would not be worth the wait.

Next here, however, Doom appears in a completely different series, returning to menace Daredevil in 1968!