Who Says A Comic Book Has To Be Good?

A change to our advertised programme - it's Not Brand Echh Week!

The purpose of this blog is firstly to organise my analysis of Doctor Doom's media appearances for my PhD and secondly to check that I've got ALL of his appearances logged in my "corpus" of texts. Going through all the stories in chronological order means that it's easier for me to spot gaps, such as when Doom's appearance at the very start of Avengers #25, which was listed in my database, led me to discover he also very briefly appeared in Avengers #24, which wasn't.

Something similar happened when I was reading Not Brand Echh #7 (I try to stay a few blogs ahead, so this is one yet to come!). It was listed as having a Doctor Doom appearance, which indeed it did in a single panel cameo. However, I noticed that they style of storytelling in this issue was to chuck in as many background gags as possible, featuring pretty much every character in the Marvel roster at the time, so it struck me as odd that Doom would only appear once in the whole 13 issue run of the comic.

I went and had a quick check on Marvel Unlimited and found that he appeared LOADS more times, including on several covers! The problem appears to be that the people who indexed this particular series for The Grand Comics Database classified him as "Dr Bloom", a name which is used a couple of times to describe him in the stories, although in other cases he is clearly meant to be the actual Doom from the comics, such as on the cover to issue #1 here.

I can understand why they might think this is best, but for completeness purposes I'm going to count all of these as either Doctor Doom or alternate universe versions (the series officially takes place on Earth-665 in the Marvel Multiverse). The problem for my attempts to read these chronologically was that I found out by reading #7, so needed to go backwards to catch up with these missing appearances, starting right here, right now, with issue #1.

As already mentioned, Doctor Doom is right there on the cover being menaced by Forbush Man... who doesn't appear anywhere in the comic. Doctor Doom - or "Doctor Bloom" here - does appear, in "The Silver Burper", a mickey take of the recent four-issue "Doomsday" series which had finished a few months previously in Fantastic Four #60. This is actually Doom's next chronological appearance, and the satirical version not only makes some very self-aware points, but does it a lot more quickly than the original storyline!

The story kicks off with Weed Wichards devising a formula to cure The Thung (there are a LOT of jokes like this), which ends up changing his head only, so that in each panel his face changes to that of a different Marvel Character. 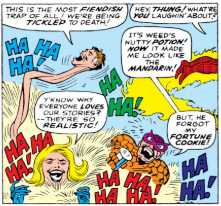 Then, just as in the original we see the Silver Burper (who does burp) arriving in "Batveria" where Doctor Bloom is waiting. By the second panel Bloom has already exhibited a key Doom-characteristic: kicking someone up the backside. 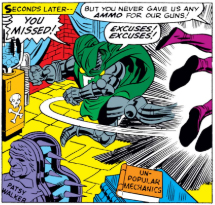 He then comes up with a cunning plot, to trick the Burper by acting good, again much like in the original and, though played for laughs here, it's not that different from the first time around. 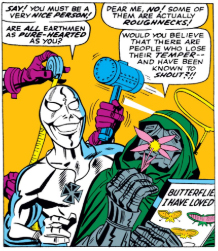 Bloom uses a device to steal the Burper's power and has him imprisoned. He tests out his newfound superpowers and, just as in the original, destroys a chunk of his castle in the process.

The Fantastical Four arrive and Bloom toys with them before soundly beating them. In the original this led to several issues of Doom flying around being annoying, but here it leads to an argument between him and Weed Wichards that only takes a single page, and then he's ready to deal the killer blow. 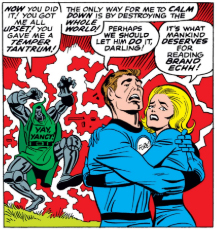 He's stopped by the pay-off to the running gag about the Thung, as his face changes into Doctor Bloom's, which is so horrible that it causes Bloom himself to run away.

Legging it is very much part of Actual Doom's character at this point, but it seems like a lost opportunity to have him flee from The Thung's imitation of his masked face, when generally it's his scarred face underneath that causes him so much horror. Still, it's a proper pay-off to an not unamusing story (especially if you find "The Silver Burper" funny, which I'm afraid I did) which keeps surprisingly close to the original. Will it remain this way throughout the series? Come back on Wednesday, true believer, and find out!