You Asked For The Origins

Only the briefest of appearances for Doom here, as a face in a crowd of tourists heading for fabled Jazzgard, in the origin of The Mighty Sore.

I'm not making these dreadful jokes, by the way... but I am giggling at them. 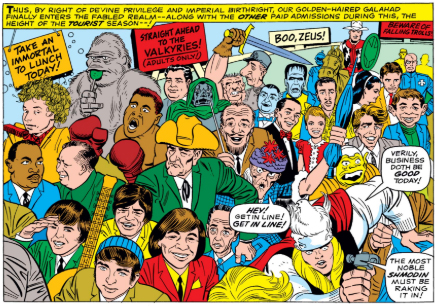 This panel is a great example of the sort of celebrity and gag-packed crowd scenes that fill this series, and which led me to think that Doom might be in it a bit more than the databases said. Apart from Aunt May (who is pretty much ubiquitous in these stories) and The Two Gun Kid he's the only other major regular Marvel character here, in a scene made up of stars of stage, screen, and world politics, demonstrating once again what an important figure Doom was to the Marvel universe at this time.

The rest of the story rattles long at high speed with some particularly exuberant illustration from Jack Kirby. 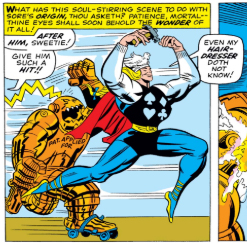 I distinctly remember this panel, from when it was repeated (I think) in a Marvel UK comic some time later (which I guess must have been Marvel Madhouse). Just because this is a joke strip it doesn't mean that Kirby is holding back, filling this and every panel with dynamic action to match Stan Lee's relentess punning.

It's a whole lot of fun - and there's more to come next time too!