Introducing: The One And Only Unmitigated Forbush-Man

Our third visit to the world of "Not Brand Echh" brings two tiny cameos from Doctor Doom in "The Origin Of Forbush Man", which unusually for this series tells a whole new story rather than mocking a previous one. It tells the story of how Irving Forbush - a joke name often used in editorials by Stan Lee - accidentally becomes a superhero while roaming through the Marvel (or, in this case, "Marble") Universe.

It's all daft fun, although I must admit that the style of these stories does start to grate a bit when you read several in succession. I guess the idea is that if you throw enough jokes at the reader then some of them will be funny, but it doesn't always work!

Doom's first appearance is in a single panel showing the "usual suspects" whom you might suspect of doing good around the city. Doom is there as the joke suspect, alongside the likes of good guys like Bobby Kennedy, Santa Claus, Charlie Brown... and Woody Allen, which is probably not someone you'd include in such a list nowadays. 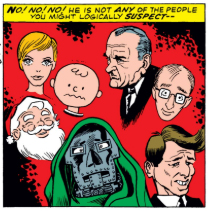 He pops up again at the end of the story, as one of several villains who are terrified of Forbush Man and demand to be put in jail for their own safety. 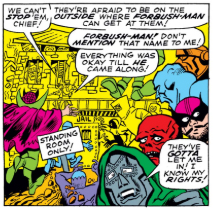 As with all of this, it's yet more evidence of what an established big star Doctor Doom is in the Marvel Universe - right up there with Peter Parker's Aunt May in fact - who is roped in whenever a bad guy is needed, despite the fact that he hasn't actually been seen in the official storyworld for nine months. That all changes in the next blog though, as he's finally back in action... in Daredevil!