This issues carries straight on from the last, with Doom asking Daredevil to be quiet via the medium of a punch in the face. This leads to several pages of a right proper punch-up, which would appear to be unseemly for a world leader like Doctor Doom, who claims that he wouldn't normally get into a fist fight "like a peasant" but is doing so here because it would be beneath him to use any of his thrilling weapons on someone without powers like Daredevil. 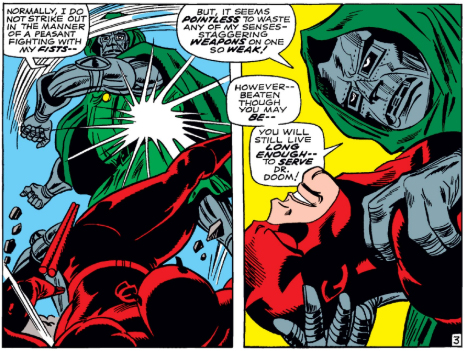 I'm not as familiar with Daredevil as I am with The Fantastic Four, so I was surprised by how important it is to the story that nobody realises he has super powers. I knew that nobody was aware that he's blind, but was not expecting absolutely everyone he meets to remark upon how odd it is that someone with no super powers should be able to do the things he does. It's like a second secret identity.

During the fight Doom explains that he was actually on his was to take his revenge on The Fantastic Four, but heard about Daredevil's fight so thought he'd pop along to see if he could capture him. The pair do have previous, from back in Fantastic Four #39, but this meeting is just a happy accident for Doom... which makes some of the events later on a little hard to explain.

Doom wins the fight, despite various New York subway users trying to stop him, and carries a newly knocked out Daredevil into a side street and then into the back of a waiting car, where we are reminded once again of Doctor Doom's status as a world leader and therefore, in the Marvel Universe, a possessor of diplomatic immunity.

Daredevil wakes up and there's another big fight, this time taking place entirely in the back of the car as Daredevil struggles against Doom and his heavies. For an expressive artist like Colan who excels at freeflowing athletic action this seems an odd choice, but I wonder if it's all because he enjoys drawing cars. He and Stan Lee were firmly entrenched in The Marvel Method at this point, so it would most likely have been Colan's choice, and there are some lovely illustrations of the vehicle as it speeds along, with the battle continuing inside. 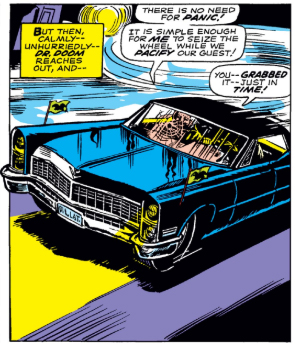 Eventually they arrive at the Latverian embassy where Daredevil is marched in at gunpoint, and then unceremoniously booted up the bum by Doom. 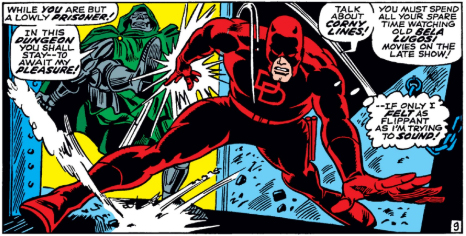 As we saw not so long ago, he does enjoy holding people in cells, but has clearly learned that they tend to escape quite easily too, as when Daredevil does exactly that he finds himself tricked into a bizarre fairground-style room containing oversized furniture that can turn itself upside down. Doom watches the confusion with delight, viewing the action, as ever, on a TV screen. 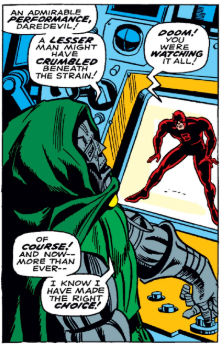 When I started this blog I was hoping to spot some defining characteristics of Doctor Doom. I was expecting arrogance, cruelty or cowardice, I was not expecting to discover he was a relentless, TV-obsessed, voyeur.

Another recurring aspect of Doom's personality, in whatever media he appears, is his willingness to tell his own story, and thus we finally discover what happened to him when he was tricked into flying into the cosmic barrier that Galactus set up around the earth, originally designed to stop the Silver Surfer from escaping. It turns out that, much like Doom claims for himself, Galactus sees no point in punishing non-combatants, so when he sees that it's not the surfer who's crashed he simply sends Doom unharmed back to Earth, while the surfer's board zooms back to its owner - all of which is illustrated (as seems to be policy in these situation) to deliberatelty echol the original story. 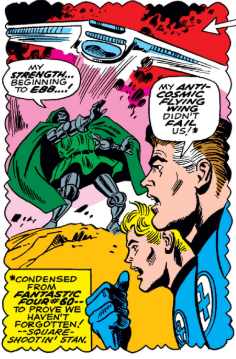 It's another mark of the continuing shared universe that these characters all live in that the final outcome to a cliffhanger in Fantastic Four #60 is only revealed a year later in a totally different series!

Doom then tries to hypnotise Daredevil, but fails because, this form of hypnosis relies on the victim being able to see what's going on - that extra secret to his secret identity keeps paying off! This leads to another fight, which Daredevil appears to be winning until- oh no! -Doom dives away and captures him inside a strange tube. This turns out to be key to Doom's "brilliantly conceived Master Plan" - a body transferal ray! 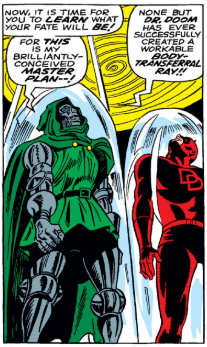 This is all well and good, but hang on a minute, didn't he say, right at the start of the story, that he only bumped into Daredevil by chance, having been on his way to fight the Fantastic Four? It's only been an hour at most since then, which is clearly not even enough time to devise a Hare Brained Scheme, let alone a Master Plan. If Doom had claimed it was the pay-off to some "brilliantly conceived improvisation" I would have agreed - he's making excellent use of the resources to hand - but no way is this a Master Plan.

Despite this, it all works out in Doom's favour, and the pair swap bodies, with Daredevil trapped within a suit of armour and Doom all in red! Thus the next issue features Doom taking on the Fantastic Four wearing Daredevil's body. Will this mean the end of Daredevil's secret extra secret? Find out next time!