The absolutle tiniest of Doom appearances in this comic, as he pops up once in the background of a single panel, threatening Spider-Man's Aunt May with a "fat lip". 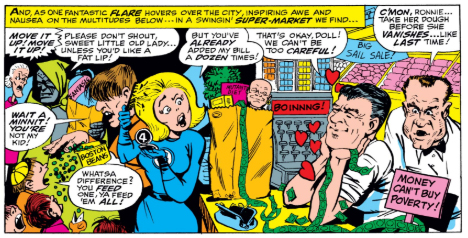 This is a distinctly odd comic, with Stan Lee and Jack Kirby doing their very best to mimic 'Mad Magazine'. Kirby had worked for humour magazines in the past, and does good job of mimicking the Mad Magazine house style here, to the extent that I don't think you'd ever guess it was him on the art if you didn't know. 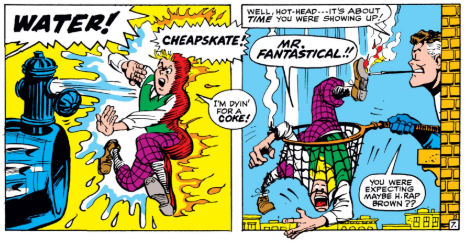 The story itself is a surprisingly faithful retelling of the Fantastic Four's origin story, which seems to have used the original story as a template, with gags added along the way. It starts with the same smoke gun warning as appeared in Fantastic Four #1, and a lot of the jokes require an intimate knowledge of that specific comic, published over six years ago. 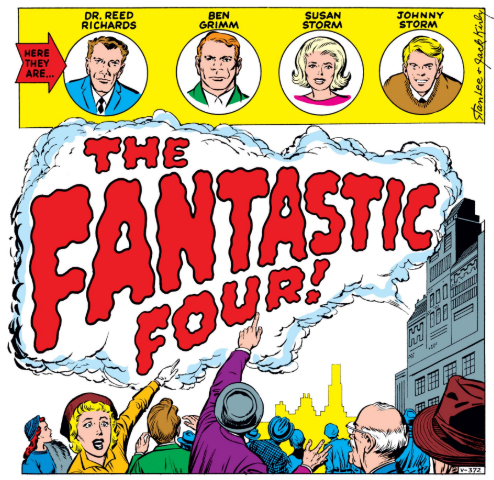 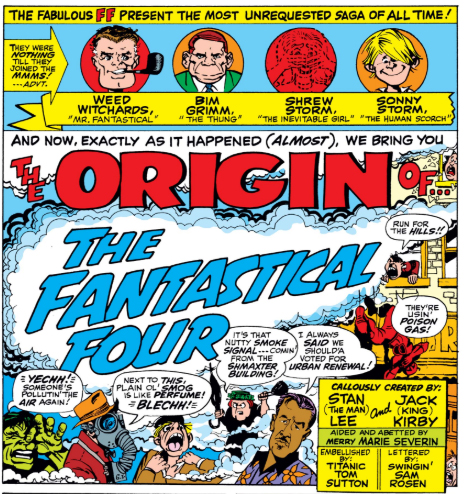 Up until this point, according to the Grand Comics Database this had only been reprinted once in the USA, in The Golden Book And Comic Set of 1966. This was a vinyl record accompanied by a specially reprinted version of the comics which was designed to help children learn to read by "reading along" with the audio, though as it was more expensive than the single comics, and less widely distributed, it would not have been available to most regular readers.

The fact that this story requires a detailed knowledge of a six year old comic is therefore a pretty extreme example of the kind of knowledge that Marvel expected of its readers by this point, though sadly, in this case, there are no huge rewards to be had, as the storyline is "wacky" to the point of annoyance. Maybe the Mad-style of comedy isn't for me, but it feels like Stan and Jack are great at humour as part of the story, not so much when GAGS are the whole point!

UPDATE: GCD in "GCD misses something" shocker! FF#1 was reprinted in FF Annual #1... which was still a couple of years before this came out, but not quite as long ago!
posted 9/8/2018 by MJ Hibbett