Crikey. If going from Kirby to Colan felt like a jolt, going from 'Not Brand Ecch' to Jim Steranko is a serious case of psychedlic whiplash. This stuff is far out!

It feels especially FAR OUT because it STILL looks like an experimental freakout despite the fact that it's fifty years old and is widely reported as one of THE far out experimental freakouts. I often feel disappointed when allegedly KRAZY texts turn out not to be so, but there is no dissapointment here!

Right from the first page it's clear that Steranko has taken the Marvel Style of experimentation and histrionics and CUBED it. I mean, look at Jimmy Woo's dialogue on the first page: 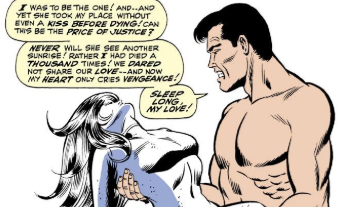 His girlfriend has been murdered, and THIS is what he says. It's like someone condensed Stan Lee until he was ten times normal strength and then served it up neat!

There's a whole heap more of this as the issue goes on, including an incredible four (4!) page spread, an infinity drive warping space and time as it enters nucelo-phoretic space, psychic storms, stunning colouring effects (especially for the time) and visuals that dare to take Kirby's stylings and crank them up even higher.

It's an astonishing tour de force, which does not feature Doctor Doom until the very last double splash page, when it is revealed that Nicky Fury's epic battle with The Yellow Claw, which has taken up this entire issue, was simply a game between Doom and The Prime-Mover, a robot that he built for the purpose of playing games with. Basically, it's all been a single player campaign which Doom lost at the very end. Let's hope he saved his progress! 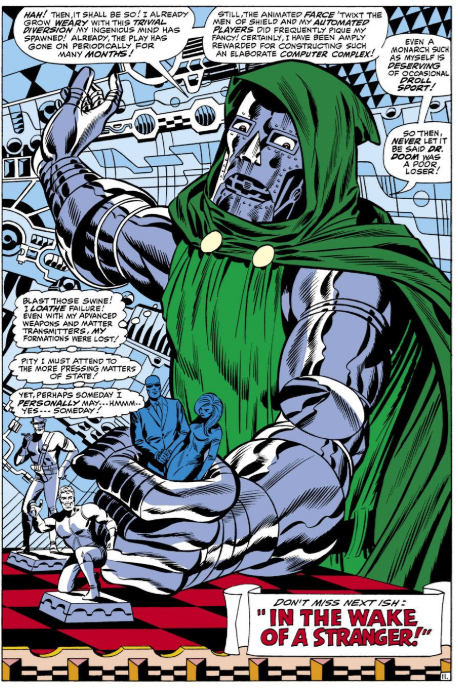 It's just a single panel, but still Steranko squeezes in a lot of Doom characteristics - his arrogance, his hatred of losing, his leadership of Latveria, and his delight in toying with people from a distance. If only he'd flung himself out of an airship whilst comparing himself to Reed Richards we'd have had the full set!