The Origin Of The Silver Surfer

After reading so much of 'Not Brand Echh' it's nice to read something in a Marvel comic that genuinely made me laugh... although I don't think it was meant to. It happened here, in the text to the splash page of 'Silver Surfer' #1.

He's a Space Spanner! The rest of the issue is surprisingly short on laughs, as for once Stan Lee goes all in on the melodrama as the Silver Surfer tries to help mankind but is rejected again and again. As with Steranko's dialogue in the recent issue of Strange Tales everything is overwrought, self-pitying, and melodramatic, but (also as with that issue) it sort of works. John Buscema's art is gorgeous throughout, echoing the text with character poses that are forever straining away like ancient statues, conveying a feeling of power combined with emotional extremity. 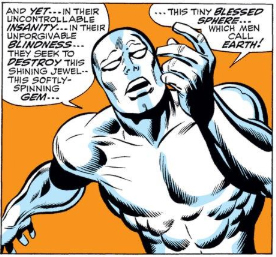 Over the course of the story the Surfer narrates his own origin story, mixed in with a recap of his adventures so far on Earth, which of course includes his meeting with Doctor Doom the year before in The Fantastic Four. Here we get to see the Surfer's side of the story, which features Doom being silent and the Surfer having no way of knowing that he'd turn out to be evil. 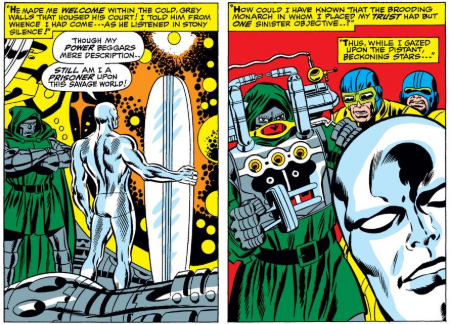 I'd suggest that having the Power Cosmic might have made you a better judge of character, especially of armoured monarchs called 'Doctor Doom', but maybe the Surfer's right. He comes across as a slightly unattractive character in his flashbacks, especially when he's shown in his former life on Zenn-La. He spends so much time moaning about how easy and BORING his idyllic life is that he almost seems pleased when Galactus turns up to eat his planet and kill everyone he's ever known, as it's at least something to do. Similarly when he takes on the role of Galactus' herald, he claims that he'll do it to save further lives, when really it's just so he can get some cosmic kicks.

Whatever the reason, Doctor Doom does not feature any further in this story, and does not even speak - something which will be rectified at last when we see him next!