This is another double-sized issue, which sees 'Not Brand Echh' moving further away from its origins in self-mocking re-tellings of Marvel's own stories, towards something much more like 'Mad' Magazine, but with added superheroes. Half the stories here are parodies of TV shows and movies (with a sprinkling of added superheroes) while the rest either mock other company's characters (including Aquaman and Snoopy) or talk about the work of comic creators themselves.

One particularly interesting strip is in the 'Auntie Goose Rhymes' section, where Aunt May (who, as I've noted before, appears all over the place in this series, as if the creators either think an elderly woman is inherently funny, or that their readers do) 'reads' nursey rhymes about the 'Marble' characters and creators. Doctor Doom appears in the 'engraved border' for the first page of the strip along with several other characters, although he's the only super-villain represented.

One of the rhymes is a tribute to Jack Kirby, and his ability to keep creating amazing characters. It's only one page long, and I think it's worth including here in full: 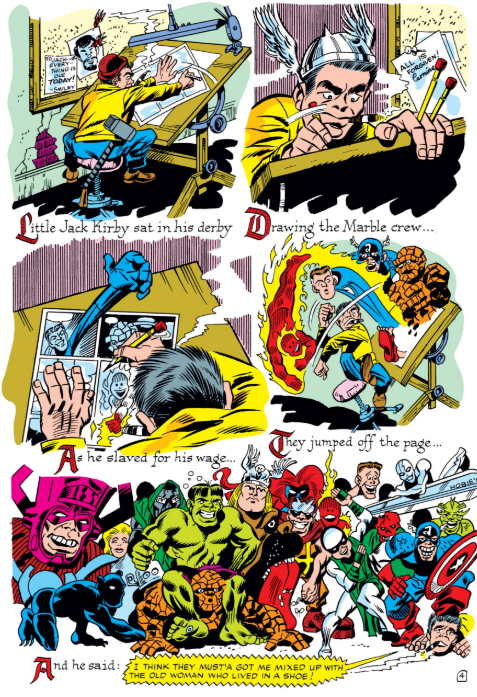 Apart from the fact that Doctor Doom appears here in his usual prominent position amongst the other leading characters of the day, it's also interesting because it's not actually drawn by Jack Kirby, it's by John Verpoorten, and it's written by Roy Thomas rather than Stan Lee, who you'd usually expect to be the one buttering Kirby up in print. This comic came out only a year before Kirby left Marvel, at a time when he was already becoming discontented with the credit he received for creating all of these characters, as well as the payment. The fact that it's Roy Thomas, a former fan, writing this tribute is perhaps a precursor to the fights by fans through the 70s and 80s to get recognition for the artist, in the face of opposition from Marvel itself.

Doom makes two more appearances, both cameos in his position as 'representative of terrifying supervillainy'. The first is in a strip called 'Super-hero daydreams' where a small boy imagines being able to transform into Doctor Doom by uttering the magic word 'Shamarvey'. 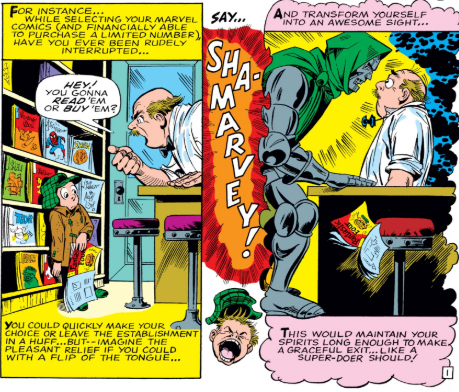 The other is in a barely comprehensible strip called 'It's A Mad, Mad Ave!' I think the idea is that all the Marble superheroes (and some villains) work in an advertising agency and can only speak in terms of advertised products... but then reply as if they're normal people off the street who don't know what's going on. Doctor Doom appears in the large pay-off panel where... er... everybody has a big fight. 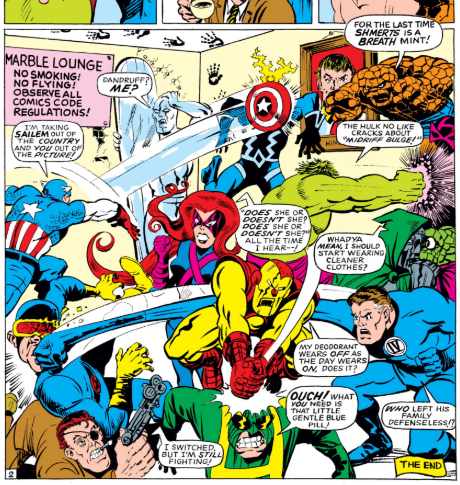 What all this shows, yet again, is that Doctor Doom is accepted as such an important part of the Marvel Universe that he has to be included on most occasions when there's a group shot, and is used as the main representative of supervillains. It also shows that I'm getting really fed up of reading 'Not Brand Echh' - just one more to go!