Prisoners In The Village

This issue continues directly from the one before, with Doctor Doom talking to a captured Fantastic Four through an "electronic spy scope" (or "Skype call" in today's money). This is a distinctly different Doctor Doom from previous encounters. He's always enjoyed taunting his enemies from afar, but here he does it in the guise of kindness, telling them that they will now be looked after under his rule. 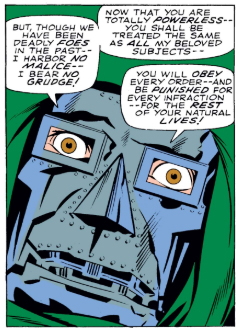 Doom's character has changed, from a wise leader who only undertook villainous activities for the benefit of his people, to a deluded dictator who believes they are foolish children who must be severely punished if they ever stray. It's a view of dictators and their propaganda-based denial of reality that reminds me of the various "Number Twos" in "The Prisoner", and indeed by dictatorships in literature and real-life.

Reed Richards compares Doom to a slave master, which he takes great umbrage at, not on any moral grounds but because slaves were known to escape, and nobody ever escapes from Latveria. 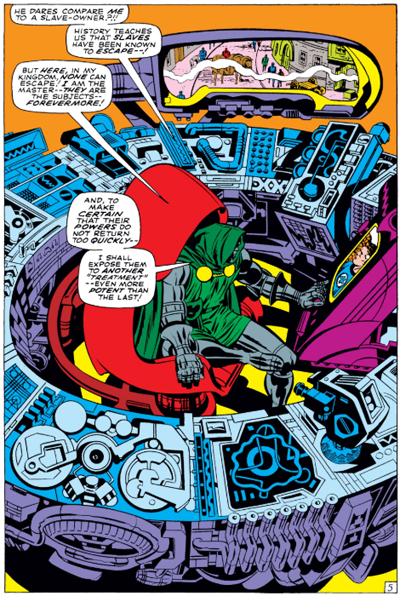 In order to make sure of this he orders the team's food to be drugged so they can be subjected to more of the hypnosis which causes them to be unable to use their powers. This leads to a long sequence focussing on Doom as he orders his subjects around and then sets a trap for some political prisoners, allowing them to think they've escaped so that he can use them as a test for his new killer robots. During this sequence Doom's self-delusion is reinforced, as he talks about his own hatred of violence just after almost throttling someone, and then going to watch prisoners being beaten up on his own instructions. 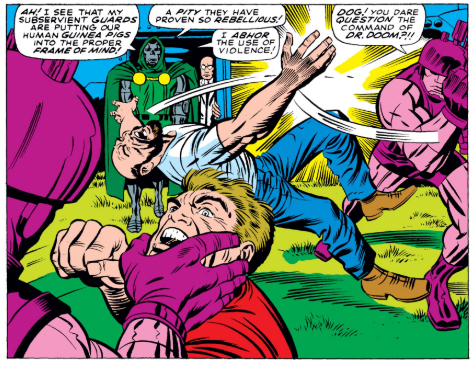 Doom uses such language constantly, not just to trick other people but also when he speaks to himself, showing that it is a worldview that he actually believes in. He is no longer the solo Mad Scientist carrying out his own plans, nor is he the noble revolutionary leading a nation, he is now an avatar for the real-life "supervillains" that Cold War Americans saw ruling Eastern Europe.

The escaping prisoners are soon killed by the robots, which leads Doom to herald the next stage of his weapons testing - "the destruction of an entire village." The story then cuts to an image of The Fantastic Four, sitting in the self-same village. 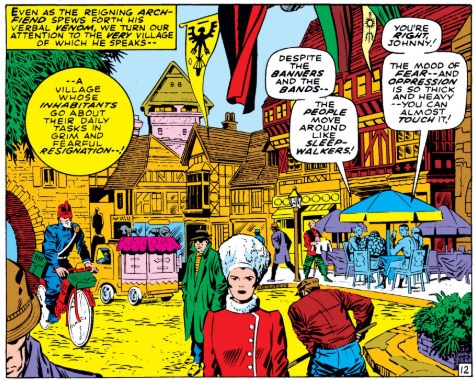 Moving the action to a village, especially an ornate and otherwordly one, draws immediate comparisons with The Prisoner again, set as it was in The Village, shot on location in the ornately designed and otherwordly Portmeirion Village. 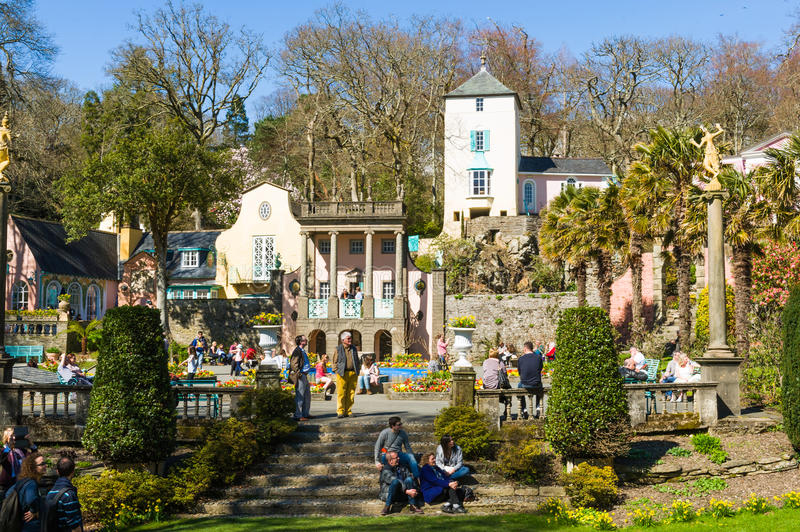 The Fantastic Four eat the food supplied for them, and then pass out. This does seem a bit foolish, as it's by no means the first time Doctor Doom has given them drugged food, and this time they wake up to find that they are terrified of anybody even talking about violence.

While this is going on Doctor Doom is having his portrait painted. Unusually for him he has demanded that his real face be represented. 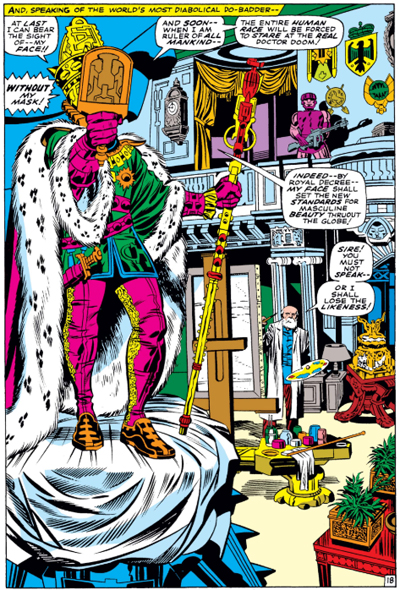 Doom has always been distraught about the destruction of his face, frequently thrown into fits of rage at the injustice of his disfiguration, so it's odd to see that he is now capable of not only looking at himself in the mirror but also appearing without his mask in front of other people. Way back in his origin story he stated that assuming the mask meant an end to Victor von Doom and the beginning of Doctor Doom, so does this mean he is reverting to his previous form? Or is his self-delusion now expanding to the point where he could one day convince himself that he is not ugly?

He's not there yet though - when an underling expresses the wish that Doom should like his painting, he is swiftly told not to be such an idiot. 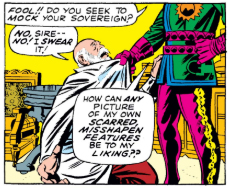 The sitting is interrupted by another Skype call, this time from some Standard Robots calling to tell him that the new Killer Robots have escaped and are heading towards The Village...sorry, towards the village, where a helpless Fantastic Four await. It's not clear whether they've really escaped, or whether it's all part of Doom's masterplan, because this is where the comic ends, on a classic cliffhanger.

The end of Lee and Kirby's run is often spoken of as a decline from their much-lauded middle-period, but I must say that so far this storyline has been terrific, in terms of plotting, characterisation, and fantastic imagery. It also marks a major turning point in the character development of Doctor Doom, which hopefully will continue as the story progresses!