There's just a single cameo appearance by Doctor Doom in this issue, but it's one that draws into question the intelligence of The Silver Surfer, for LO! he has been called a spanner of space before, and he definitely acts like a right spanner here.

The story starts off with a Dr Frankenstein and his hunchbacked assistant doing various experiments which lead to them being attacked by a village mob. Throughout the story this Frankenstein talks about his ancestors, and the villagers shout about wanting to be rid of Frankensteins in the plural, which means that there must have been at least two more before him, who also created monsters. How this all worked, and how the family managed to maintain a castle in the same village despite all the monster creation, is not explained. Instead we see the current holder of the name sitting at home watching videos of one of his predecessors, which look suspiciously like certain old movies... 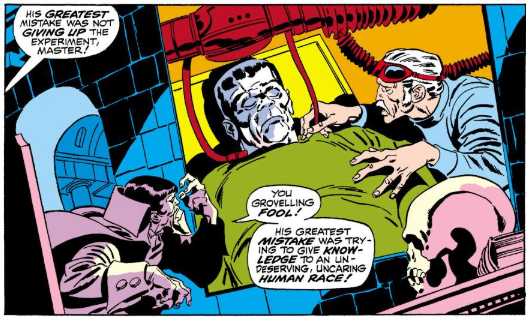 The Silver Surfer eventually comes into the story when he notices the angry mob heading for Frankenstein's castle. "Once again I must bear witness to man's inhumanity to man!" he sighs, like an Intergalactic Morrissey, then zooms down to disperse the mob. He then flies into the castle to meet the man he's just saved, and remarks that the last time he did this it was to meet Doctor Doom.

"I gave him my trust... and lived to regret it," says Moz... sorry, the Silver Surfer, who then goes on to make EXACTLY the same mistake again. Maybe on Zenn-La things like cloaks, histrionic protestations of innocence, eeries castles and evil henchmen are associated with delightful toddlers and fluffy kittens? It's the only explanation for what a total pillock he is here.

He allows Frankenstein (who is called FRANKENSTEIN for heaven's sake) to conduct an experiment on him, which creates an Evil Duplicate, which leads to a massive battle than involves the Air Force being called out, and ends with the Surfer beating his rival because he can concentrate for slightly longer. The story ends with a, to me, hilarious picture showing the Surfer lying on his bed... sorry, an asteroid, moping like a massive teenager about how misunderstood and sensitive he is. 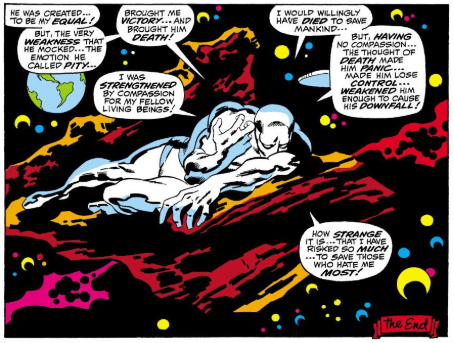 It's one of Stan Lee's daftest scripts, but it looks gorgeous throughout, with Sal Buscema providing thrilling inks for his big brother John's wonderful pencils. They even make a rabid rabbit looking exciting! 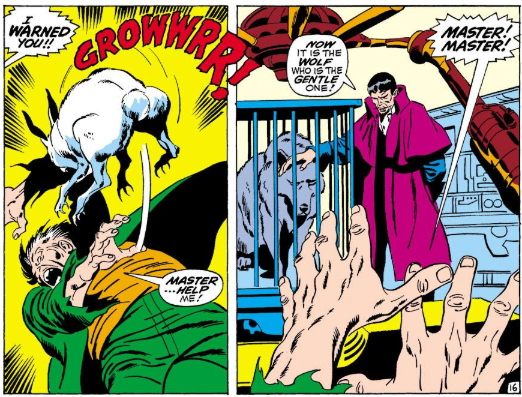 Next time there's more John Buscema as Doom meets, and fights, Namor The Submariner once again, in a story that is a big step towards Doom's 70s characterisation and position as an occasional lead character.