In The Darkness Dwells... Doom!

It's another issue drawn by John Buscema for us today as he fills in for the regular series artist, the great, sadly departed Marie Severin who was, according to the credits box, "vacationing in the beautiful Bahamas!"

It's a great looking story, packed with Buscema's dynamic art, packed with straining figures as a de-powered Namor struggles to escape from the US Army. 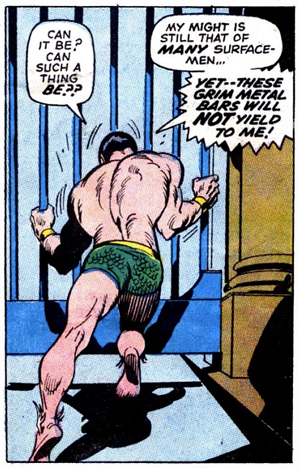 Eventually he finds his way to the back of a building which, as luck or otherwise would have it, turns out to be the Latverian Embassy. What are the chances? Namor is allowed in, and he's saved from the army, only to be attacked by what appears to be a lazer-powered vacuum cleaner.

It's all part of the security system operated by Doctor Doom, who quickly shows up calling himself Namor's friend. The Sub-mariner quite rightly points out that the last time they met Doom betrayed him, and Doom dismisses this as an "old mistake" which should not get in the way of their common goals. 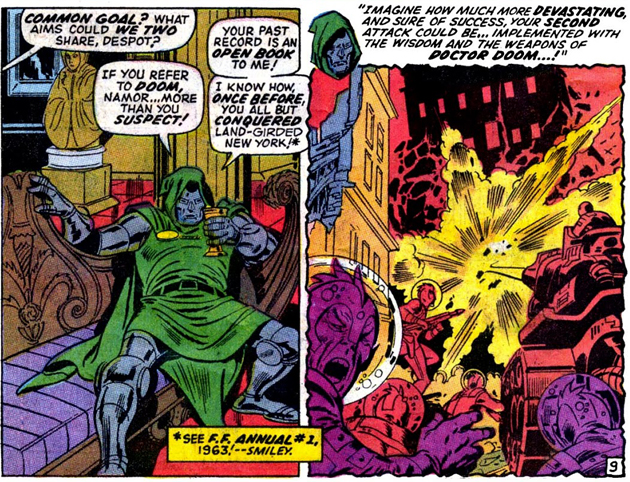 This is the same Doom who, very recently trapped Diablo in a post-apocalyptic nightmare future for daring to propose an alliance, in a story also written by Roy Thomas, yet here is talking team-ups, it seems, with anybody who happens to pop round the back door. Perhaps he sees Namor as more of an equal - he does also rule his own kingdom, as he points out, which could "swallow Latveria whole."

In general, however, Doom's characterisation here tends to match the one which appeared in the recent Marvel Super-Heroes appearance, rather than that seen over in The Fantastic Four, with Doom using his own wits and technology rather than the power of the state. Maybe he just behaves differently at home to how he does when he's in the embassy?

Actually, maybe he does? Let's keep an eye on that in future!

Namor refuses the offer of an alliance, which Doom accepts with apparent ease. All the Sub-Mariner wants is a glass of water to restore his strength, so Doom promises to pop off and get him one. However, instead of heading to the kitchen sink, Doom gathers a few henchmen together to tell them his cunning plan - to lock Namor in the embassy and remove all traces of water from the building! 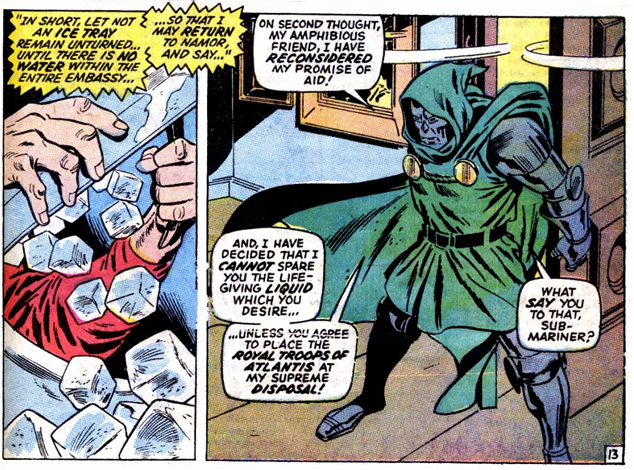 What a fiend! It's noticeable that the Embassy staff are very different from his servants in Latveria, looking more like hired mercenaries rather than Latverian peasants, although the ambassador does at least try to discuss diplomatic niceties with his boss. 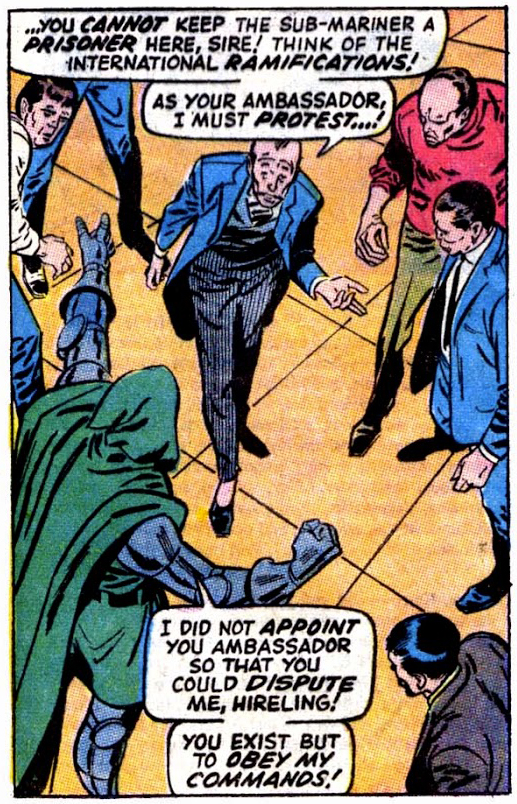 If Jeff Sessions ever read this comic, I wonder if he'd sympathise? Doom tells Namor what's going on, and the Sub-Mariner fights back. Last time there was a scrap in the Embassy Doom duffed up Daredevil easily, but here the de-powered Namor is a much trickier opponent, forcing Doom to call in his "army of mercenaries" to bring him down. 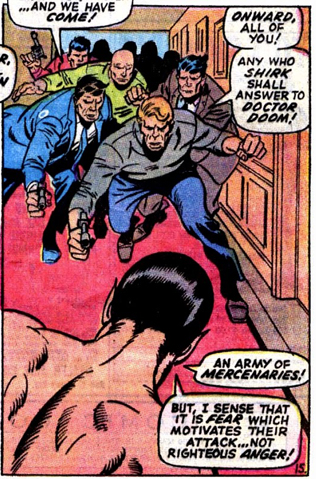 Again, this is a return to earlier versions of Doom without armies of killer robots, but maybe this really is what happens when he's in America. I guess there isn't a diplomatic bag big enough to bring his Robot Factories over, so he has to rely on hired human help instead.

The mercenaries aren't up to much, and eventually Doom realises that he has to step in himself, going head to head with his former ally and unleashing Heat Rays which drain Namor of moisture and, basically, start to burn him to death. Namor pretends to be defeated, but in one last act of defiance manages to break one of the Heat Ray Guns, unleashing "pent-up flames" on the building.

As the lackey says, this is a bit of a problem because they don't have any water in the building to use to put it out. I'm not au fait with 1960s US Fire Regulations in Diplomatic Buildings, but surely they would have had some capacity for dealing with such a threat? Like a fire extinguish, or even just turning off the Heat Rays?

Luckily for all concerned the New York Fire Brigade turns up, blasting water into the building which not only puts out the fire but douses Namor in water, allowing him to regain his strength and flee. Doom is unable to stop him because, he says, doing so would violate his Diplomatic Immunity.

Yet again Doom (or, rather, Roy Thomas) seems to contradict himself. Back in Marvel Super-Heroes Doom specifically said that he didn't care about Diplomatic Immunity, yet here he is saying that he's prepared to let an adversary escape, rather than risk losing it. I'd argue that the truth of this is that Doom really does care about his immunity, and he was just getting over-excited and showing off in front of Diablo before.

So the story ends with Doom's character appearing to vary according to where he is. This version of him seems to be a continuation of his appearances in Daredevil and, going further back, The Peril And The Power!, where he's willing to get directly involved in conflict, rather than the version we've just seen in The Power And The Pride! who prefers to operate from afar. The clear similarity between the latter two story titles now makes me wonder if the change into a deluded despot was a deliberate attempt by Lee and/or Kirby to evolve the character into something new, possibly as a commentary on current events in Eastern Europe, with Roy Thomas and others instead building on the quasi-heroic character first introduced back in Fantastic Four Annual #2. Or maybe we can explain it in-universe by saying that Doom, like so many of us, just acts differently at work to how he does at home?

Either way, it's a fascinating development for the character, which hopefully we'll be seeing more of soon as we approach his first appearances as an ongoing (shared) lead in Astonishing Tales!