This comic is a landmark 100th issue (not including annuals) of an uninterrupted run from two of the absolute greats of comics, promising every single villain ever. And it's a big disappointment. Doom's on the front cover, right in the centre, fighting Mr Fantastic, but he only appears very briefly in the issue itself, and even then it's not the "real" Doctor Doom.

I know that this is almost the end of that run, when Jack Kirby was fed up with the way he was being treated and was clearly no longer pouring his all into the artwork, but coming only a year or so after "The Power And The Pride!" it all looks very mundane, and the story itself is a big let down.

The plot, such that it is, sees The Fantastic Four (and Crystal) attacked on their way home from a mission. They crash land and are attacked by Kang The Conqueror and a particularly pedantic Doctor (not "Doc") Doom. 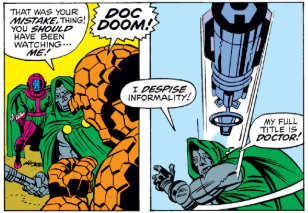 There's just time for Doom to bring up the whole "Are Doom and Kang and Rama-Tut the same person?" nonsense (I wish he wouldn't, it makes precisely NO sense) before Crystal zaps a tree and, basically, kills them both. 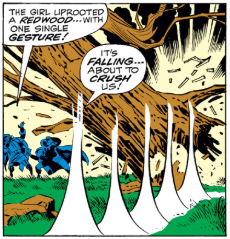 Luckily for all concerned it turns out that Crystal isn't a murderer, as these were just androids, created by The Mad Thinker and The Puppet Master. They have loads of these androids, which apparently have "the powers and the memories" of the originals, but still AREN'T the originals, which makes the whole thing feel a bit of a let down. It's the 100th issue and the Fantastic Four are fighting The Mad Thinker and The Puppet Master, not exactly the Premier League of their bad guys.

Their plans to conquer the FF collapse when they unleash an android version of The Hulk, who refuses to obey orders and instead sets about destroying the lab. The Puppet Master tries to shoot him and accidentally hits some explosives, blowing them all up. Thus, not only do the FF not fight most of their baddies, they don't even win!

It all ends with the team hitching a ride on "a specially requisitioned NATO plane", and congratulating themselves on the face that they're still together. 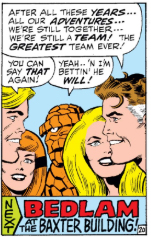 This is surely Stan Lee talking to Jack Kirby, but it rings very hollow indeed. They're far from at their best, and they won't be together much longer, with Kirby leaving after issue 102. It is, as stated earlier, a disappointing way to wind up one of the greatest runs of superhero comics... EVER!