Unto You Is Born... The Doomsman!

A year after his tryout in Marvel Superheroes #20, Doom finally gets an ongoing series, albeit one shared with Ka-Zar, another Marvel Super-heroes alumni. However, even with only half an issue, Roy Thomas and Wally Wood pack in an awful lot of story, continuing the characterisation of Doom that Thomas began the previous year, as a tortured soul determined to succeed at being a ruthless dictator, whatever his heart might say.

The story begins with Buzz Aldrin and Neil Armstrong finding a strange globe on the moon which, when shown to Nixon on their return, turns out to be yet another remote broadcasting device belonging to Doctor Doom. As has been frequently mentioned, he does love to taunt people by television, and he's gone to an enormous amount of trouble to do it this time, teleporting a spherical screen a quarter of a million miles just to show how clever he is! 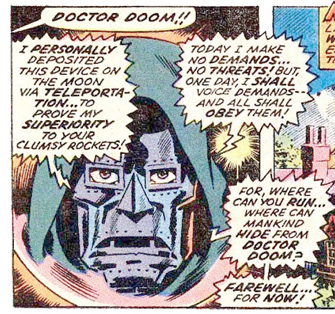 We then cut to Latveria, a "storybook kingdom" "nestled high in the bavarian alps" where the people scatter in fear as their dictator approaches, recreating once again the classic scene of Doom walking amongst his people, first seen back in Fantastic Four Annual #2 and repeated many times since. 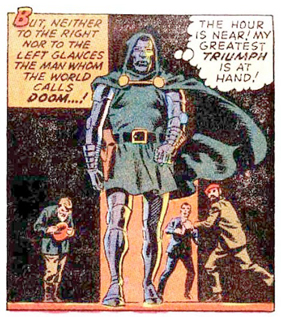 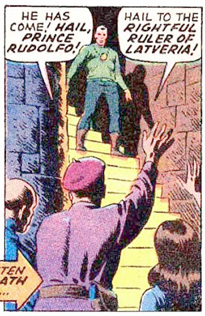 Their leader is Prince Rudolfo, technically the heir to the Latverian throne. He is, not to mince words, a bit of a dick, and some of the members of the resistance are uneasy about allying themselves with someone who makes no secret of the fact that all he cares about is putting himself back on the throne. 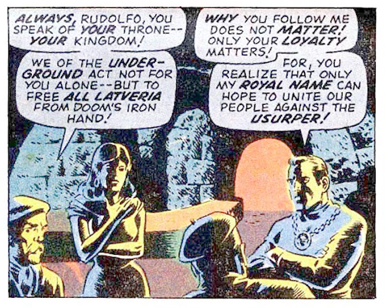 Rudolfo resembles Doom in many ways, but the key difference is that Rudolfo has done nothing to earn his rulership, whereas Doom at least led a revolution - something which could go either way in American readers' affections, depending on whether he's "good" revolutionary (like the Americans themselves) or a "bad" one like Lenin. Making Rudolfo resemble a Nazi is a way of nudging the readers' sympathies away from him. After all, it's Doom, not Rudolfo, who is the hero of this story, so traditionally storytelling would dictate that he's the one the readers should be sympathising with.

Similar, Rudolfo's Cunning Scheme to bring Doom down does not exactly endear him to readers. He has recruited a girl who resembles Doom's lost love Valeria (introduced in Thomas's previous issue) and he intends to use this resemblance to destroy his opponent. How Rudolfo knows about Valeria, or what she looks like, is not discussed.

Thus the girl, Ramona, is deposited in a faked car crash where she is seen by some of Doom's robots, who have instructions to bring anyone resembling Valeria to their master. The entire scheme falls apart instantly, and rather wonderfully, as Doom (who has extensive history with body swaps and doubles) immediately, and very sensibly, uses his Hypno Probe to see if the girl is who she appears to be, and quickly discovers that she is part of Rudolfo's plan to overthrow him. If only more superheroes and villains took the time to check things before flying into action there would be a lot fewer misunderstandings!

Interestingly, rather than thrash about with rage, screaming at subordinates, Doom wanders off to have a bit of a mope on the balcony, demonstrating that this is the sensitive version of Doom who we saw in Marvel Superheroes and his original origin story, rather than the deluded despot seen in recent issues of The Fantastic Four. 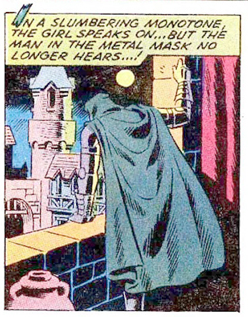 When he finds out that the plan has failed Rudolfo tells his men that this was all part of an even more Cunning Scheme to put Doom off his dictatorial stride (is he related to Reed Richards, I wonder?), much to the disgust of the resistance members, who quite rightly point out that risking their lives so easily makes him no better than Doom.

The Cunning Scheme does seems to be working, however, as an emotional Doom finds himself unmasking in front of Ramona/Valeria. Underneath the mask she sees not his true face, but an illusion he has set up of his previous handsome looks, leading her to say "Yours is a face - a woman could love!" This is all too much for the sensitive, self-aware Doom, who rushes from the room regretting his own weakness. "I cannot - will not live a lie!" he thinks, as he returns to the Mad Science dungeon which is, he believes, his only true home. 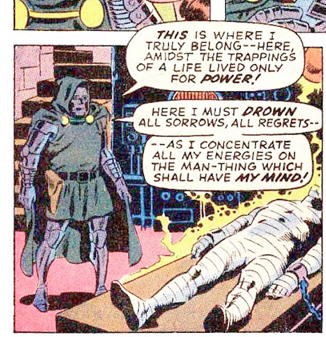 This is some beautiful characterisation by Thomas, aided by some lovely artwork by the great Wally Wood, who still manages to convey Doom's inner turmoil through body language, despite facial expressions being all but ruled out beneath a full face mask.

Doom decides to get on with his day job, which today involves placing his own brain patterns inside a robot. While he's busying himself with the mundanities of the nine to five Rudolfo (who doesn't get any subtle shades to his characterisation) launches his attack, sending Ramona into the lab where she catches Doom with his mask off and no illusions in place to conceal his true face. Appalled by what she sees, and the evidence of the Mad Science he's working on, she tries to smash up the lab, cutting power to the castle in the process and allowing the jetpack-wearing resistance to storm the barricades, unhindered of the robot guards who, apparently, were plugged into the same power supply which has now been cut off.

During all this the creature Doom was developing - the "Doomsman" - also manages to escape and flee the area, heading for the next issue.

It's all going well for Rudolfo until Doom himself enters the fray, using technical wizardry to confuse the interlopers with multiple mirages of himself. When they finally work out which one is the "real" Doom he explodes, and they discover that it was a robot all along, primed with explosive. The real Doom, as is his wont in whatever characterisation, is watching, and gloating, from the safety of his castle. He does this while sitting in the same broadcasting booth that was seen in Fantastic Four #85, demonstrating that Wood is attempting to work with the visual continuity established by Jack Kirby, even while Thomas is diverging from the characterisation being pursued by Stan Lee. 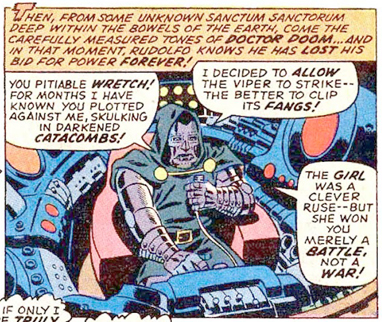 The story ends with Doom celebrating victory over his enemies while still harbouring personal doubts. The Doomsman is still at large, with a copy of his own brain inside a super-robot body, meaning that "I may have created the most formidable enemy of all!" He may be sensitive, but he's still Doom and still arrogant - whether he's right, however, we'll find out next time!