Their Mission: To Destroy Stark Industries

Doom only appears in flashback in this issue, which concerns a determinedly mulitnational criminal version of Mission Impossible setting out to bring down Tony Stark's company. While they get ready Tony Stark mopes around thinking about his history as a superhero, musing over some of the adventures that he had with The Avengers. 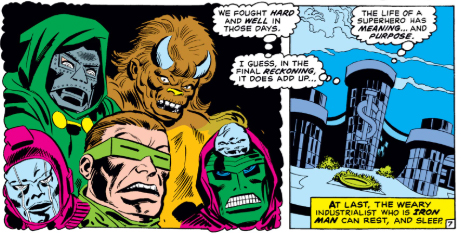 The only problem with this, continuity-wise, is that Iron Man has as yet to met Doctor Doom, at least in the stories published so far. Doom has appeared in a couple of issues of The Avengers, but this was during the Kooky Quartet era and Iron Man was not a member then!

I don't recognise the two villains on the right of the picture, so I guess that the artist, Don Heck, decided he needed to bump up the star quality and, as usual, Doctor Doom was the first choice. We've seen on many occasions that, if there's a gang of baddies, you need Doom in there amongst them to prove that they're proper supervillains, and that seems to be what's happened here!

Next time we're finally back in Doom's own series to find out what happens with The Doomsman - at last!