This story deals with an issue central to the entire series - how do you deal with having a super-villain as the hero of the story? Along the way it has a lot to say about American Cold War attitudes to Eastern Europe.

It starts with Doom standing in the ruins of his castle, apparently continuing directly on from the previous issue two months ago, with no mention of the various other appearances he's had since then. After a very brief recap ("To defeat the rebels I had to destroy my palace!" That's it!) he immediately switches on his video communication system to issue orders to his subjects. 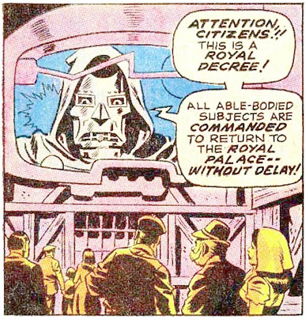 The Latverians trudge along to do his bidding, disgusted with themselves for the way they put up no resistance. 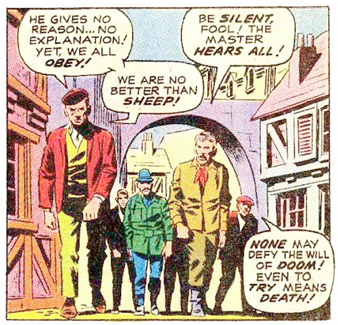 In this story Latveria is standing in for Eastern Europe, and thus its people are viewed with a kind of disdain throughout, as weaklings unable to overthrow the yoke of dictatorship as Americans had two centuries before. They agree to "labour night and day" on Doom's reconstruction project, at which point Doom himself flies off, leaving them to get on with it. 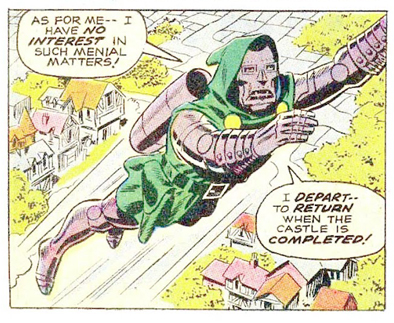 The problem for the storytellers, Larry Leiber and Wally Wood, is that with such an unlikeable character as their lead they need to find a way to make the reader sympathise with him. One way to do this is to have him fight against somebody even worse, and so they bring in pretty much the worst of all villains - the Red Skull. 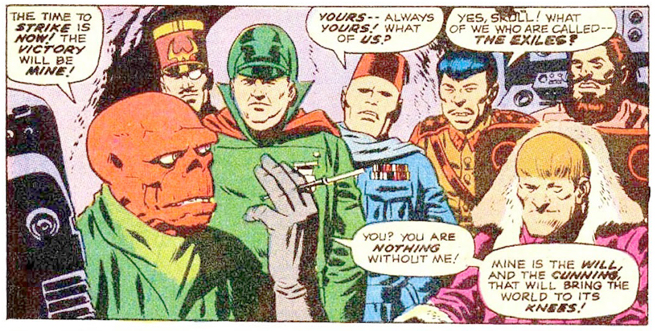 Here we see him hanging around with a group of quite ludicrous national stereotypes - the Exiles, a group of old Nazis looking for somebody to give them direction. The Skull gives them this, taking them wth him to Latveria because "after years of subjugation by Doctor Doom, the Latverians have little spirit left." It's a bit of a risky trade-off if you ask me - the people might be easy to subjugate, but won't their current ruler be a bit annoyed when he comes back?

The Red Skull seems to think it's worth the risk so he and his gang fly over to the "Story-book kingdom" of Latveria and make short work of beating up the local populace. Meanwhile Doctor Doom has flown down to the Riviera, where he's wandering around the resort, looking for fun. 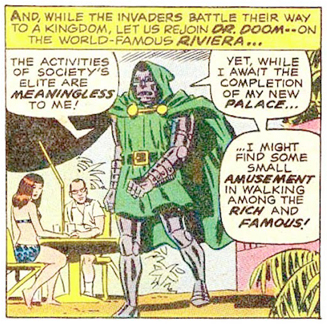 Apart from being a fabulous image, this neatly encapsulates certain US attitudes towards Eastern Europe, and indeed other countries around the globe, during the Cold War. Here we see that as soon as the strong ruler leaves the country it is taken over by much worse characters - the worst of all, in this case. This is an echo of US Foreign policy during this period, when dictators would be supported abroad in the belief that they would at least prevent the arrival of something much worse, whether that be Nazism or Communism. Doom's dalliance at the beach is a metaphor for other dictators losing concentration and becoming (even more) decadent, rather than ruling their people.

fter having a couple of thieves try to rob him and being barred from the roulette table Doom soon tires of the life of the idle rich, so he flies off again, looking forward to getting home. 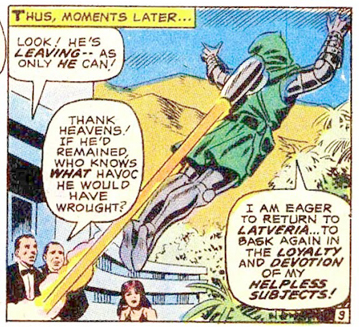 However, there's a very different scene waiting for him when he gets back which... well, let's have a look: 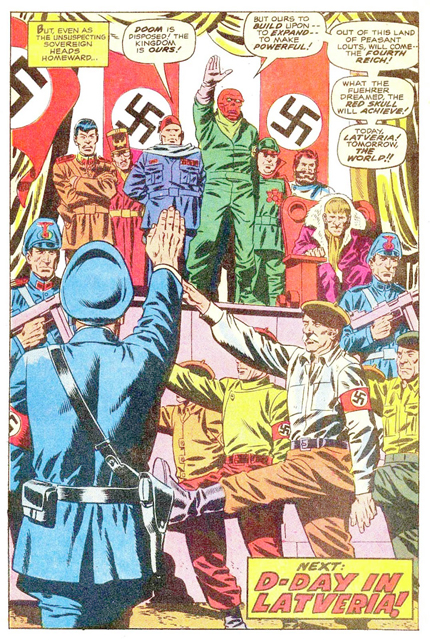 The Latverians have not only been defeated, they are now Actual Nazis! And that's it for this issue, and a story in which Doom has behaved absolutely appallingly, though theoretically less badly than those who wish to oppose him. It's not exactly a ringing endorsement of his leadership and, yet again, it's a very very different portrayal than that which we saw when we were first introduced to Latveria. We'll see how it goes next time, when Doom fights the Nazis!