The Monster And The Madman!

One of the great things about reading through all of Doctor Doom's appearances like this, that I get to be surprised by finding surprising developments in the most unlikely places. I would never have expected to see vital parts of his fictional biography taking place in a couple of obscure issues of 'The Incredible Hulk', but that's exactly what's happening with this story.

This is meant to be part two of the tale covered in my previous blog, but the issue starts with a bizarrely misleading splash page, showing The Hulk fighting Iron Man. At first I thought I'd skipped an issue, but then saw the footnote which pretty much predicted my reaction! 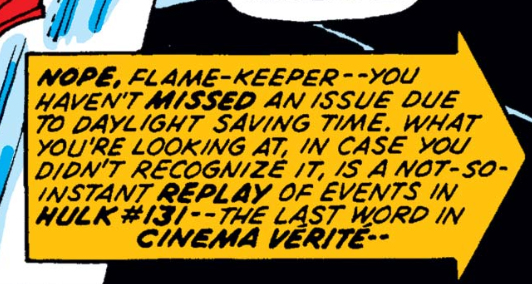 The next page rather cunningly pulls back to show General Ross giving a talk about previous meetings with the Hulk, and leads into the traditional recap of what happened last time, featuring Dick Ayers doing a copy of his swipe of a John Buscema image from last time. 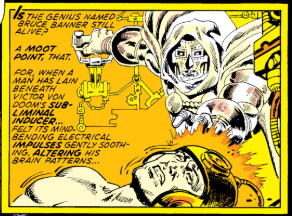 Next the scene shifts to Latveria, where we find Bruce Banner working in Doctor Doom's lab as an apparently loyal team member who leaps to join in with the hailing of Doom when he enters the room (Latverians love hailing as we've seen many times before). However, Doom is not alone - he has Valeria with him!

We last saw Valeria back in the (brilliant) Marvel Superheroes #20, leaving Doom's castle determined never to see him again. It seems that Roy Thomas, who also wrote that story, must have regretted this decision, and he had Valeria address it early on. 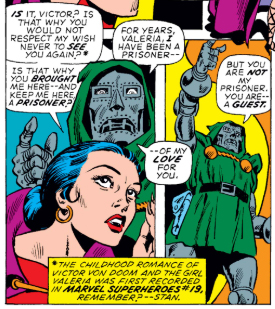 Seeing Doom profess his love for another individual is distinctly odd - one supposes, based on his previous actions, that he must have some secret plan, but for now it looks like he means it.

He introduces Valeria to Banner, who immediately gets agitated and turns into the Hulk, allowing Doom to play the kindly protector, trying to show Valeria how much he cares for his subjects. He uses his tranquilizer ray (which I guess is an upgrade on the Hypno Gas) to calm the Hulk, who transforms back into human form. If Doom was doing this to impress his unwilling girlfriend, however, he rather blows it when he snaps at her entirely reasonable shock at what she's just seen. 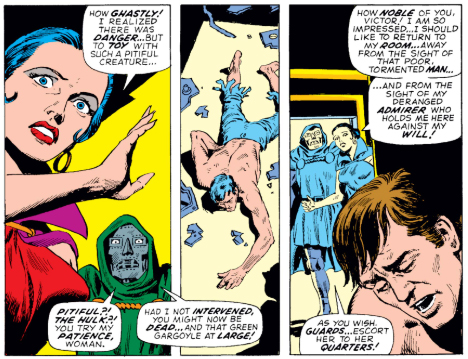 It turns out that he does have a cunning scheme after all, although this one is designed to make Valeria fall in love with him. SPOILERS: Doom is unlikely to be getting work as a relationship counsellor.

His plan is to tell Valeria that a neighbouring country (presumably the one very briefly mentioned last issue) wants to attack Latveria. When she begs him not to strike the first blow he gladly agrees, knowing that at that moment his lackeys are down in the lab ready to bring the Hulk back by shooting Bruce Banner with a jolt of electricity. Once they've done this the Hulk immediately bursts out of the castle and heads to the border, as programmed to do by Doom, with a gamma bomb strapped to his back!

Doom's plan continues apace, with a lackey running into his room to tell him that the Hulk has escaped, having stolen the Gamma Bomb. He pretends to bravely take responsibility for the error, and declares that, regretfully, he must now detonate the bomb to save innocent lives before the Hulk is able to reach a populated area. 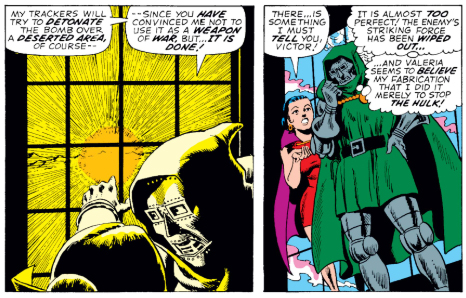 Doom is feeling pretty pleased with itself - he's actually detonated a bomb over enemy territory AND he's impressed the girl he likes, and who amongst us can say they have never dreamed of achieving something simmilar? But then another lackey comes in with a genuine message - his plan hasn't worked! The bomb really did blow up over unoccupied territory, and Valeria reveals that this was her doing. She knew what was going on all along, and had undertaken a complicated scheme to revive Banner and get him to reprogramme himself so that, as the Hulk, he could take the bomb to a safe place.

I tell you what, with Cunning Plans like this, it's no wonder Doom thinks they're well matched!

Doom, however, is most miffed by this turn of events and declares that his love for her is finally over. However, before she can be thrown into the dungeons, the Hulk returns and he and Doom launch into battle over the skies of Latveria, watched by terrified locals. 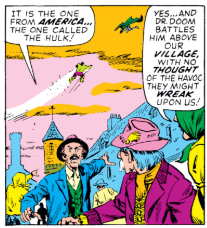 Is it me, or have the Latverians got somewhat Groovy since we were last there? They're right to be worried though, as the battle quickly puts Valeria in danger. 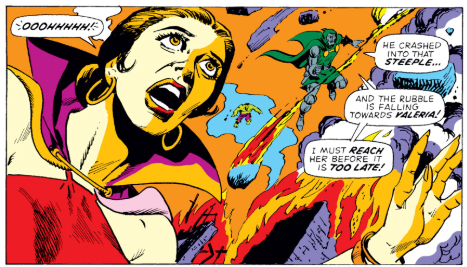 Doom leaps into action to help her, leaving himself open to attack by the Hulk, who tries to squeeze him to death. Doom gets out of this one by refusing to give up, until the Hulk gets bored and lets him go.

Valeria runs over to Doom, apparently convinced that he's not such a bad sort after all.

This reminds the Hulk of Betty Ross, and leads to a rather brilliant image of him with The Glums. 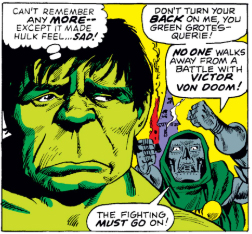 Poor Hulk! The issue then comes to an end with a very similar sequence to that seen in the recent Thor 183, with Doom ranting and raving at his enemy to come back and fight him. 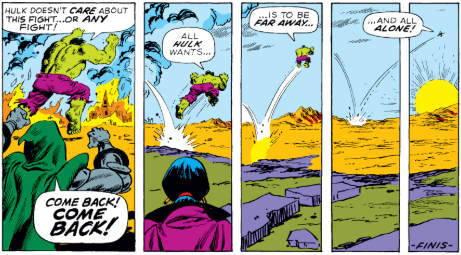 Is this a new trope in the making? We'll have to wait and see!

And thus ends a surprisingly Doom-heavy episode of a series in which another character is meant to be the lead. This is a pretty good run of Doom stories, and it's about to get even better when we return, in our next blog, to an absolute classic!