This is a comic I've read about a few times over the years, as various commentators have used it as an example of how silly comics can be. Reading it for myself for the first time, however, I'm struck by how exciting, action-packed and characterful it is. Luke Cage is absolutely bloody furious throughout most of the two-part story, with good reason, and this makes everything rocket along at high speed. It's not silly at all, it's brilliant!

The story starts with Luke recapping the previous issue whilst trashing his own offices in frustration with how his life is going. He's interrupted by a flashy looking fellow who wants to offer him a job, but Cage is too wrapped up in his current worries to pay too much attention, and sets off instead to chase a suspect across the streets. Some of the dialogue is a little "of its time", with multiple racial stereotypes at play, but it's a great example of high-octane comics with little in the way of superpowers.

Eventually Luke loses his quarry, so he pops over to see his girlfriend, Claire Temple. Claire is a young, black, female doctor, which seems terribly modern, especially just a few years since the Fantastic Four were forever telling The Invisible Girl to get on with the washing up, although this is slightly let down by the fact that she immediately sews Luke's shirt up before hopping into bed with him. 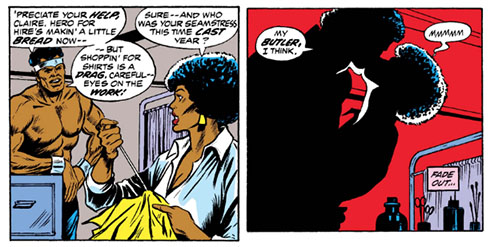 An hour later Luke is back on the street, where the mysterious well-dressed businessman from before returns to offer a lot of money to track some people down. Luke accepts the offer and very quickly finds the men he's after, who turn out to be robots! 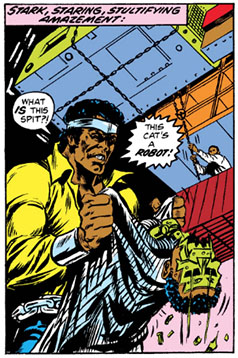 "What is this spit?" Is Luke in The Good Place?

The robots escape, so Luke tracks down his contact, who he discovers dressed in full military uniform at an embassy party. The embassy, of course, turns out to be Latveria's, and the host is none other than Doctor Doom! 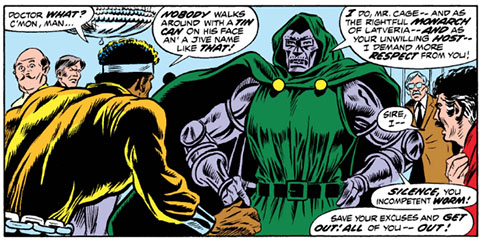 I do like the fact that Luke Cage refuses to believe that Doctor Doom is for real. It's a nice touch which reinforces the idea that Cage is a hero of the streets, with little do do with the traditional cosmic superheroics of the Marvel Universe. In a way he harks back to the early days of the storyworld, when aliens and robots weren't necessarily accepted as common occurrences.

Also notable here is that this version of Doom looks almost exactly the same as the pin-up by John Buscema from last time, with only his pistol pouch missing. His character is also in line with recent developments, taking care of his subjects while openly expressing his superiority to them, and talking to Cage with respect rather than derangement. It's also here that we find the most famous panel from this issue, with Doom lamenting the fact that nobody ever seems to emigrate to Latveria. 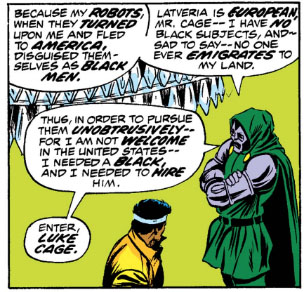 Cage heads off to find the robots again, leading to a gorgeous sequence where George Tuska and Billy Grahams get to depict a right old punch-up, with dialogue by Steve Engelheart which reminds me of early 2000AD stories.

It's brilliant, funny, fluid storytelling that is miles away from the early days of Lee and Kirby, but very much in the same tradition of everyday worlds being invaded by the bizarre. This is underlined even further at the end of the story when Cage rushes back to the embassy to get paid, only to find that Doctor Doom has left without paying! 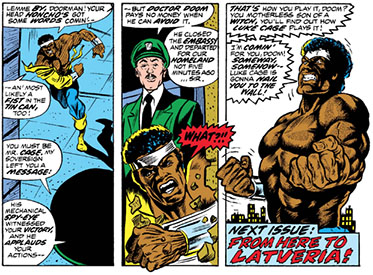 The only wrong note in this entire excellent comic is there at the end, when we're told that "Doctor Dooms pays no money when he can avoid it." This is not something we've ever seen before, and bears little relation to a character who's prepared to pour everything he's got into his latest inventions. I can see why it's there - to push us onto what happens in the next issue - but it sticks out as a wrong note in an otherwise thrilling issue. More please!