Where Angels Fear To Tread!

This issue carries on at the same furious pace as the last one, starting with Luke Cage fighting the entire Fantastic Four single-handed! He's gone to the Baxter Building to borrow a rocket, so he can fulfil the promise he made last time and go to Latveria to collect the money Doom owes him.

The Fantastic Four find the idea of anyone going to so much trouble to collect on a debt jolly amusing, which makes them an interesting contrast to the distinctly working class Luke Cage. To them, $200 is a negligible sum, but to a working man like him it's a lot. Also, there's the principle of the thing - he won't stand for being ripped off. 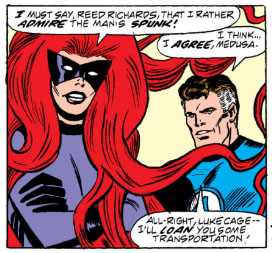 It's a neat bit of writing from Steve Engelheart which demonstrates how different Cage is from the first family of Marvel Comics, while also rather cleverly finding a way for the character to get over to the other side of the world.

As soon as Cage arrives in Latveria his ship is stopped by Doctor Doom's security systems, and a platoon of guards runs out, expecting to be fighting the Fantastic Four. When they discover just one man they find the whole thing hilarious. 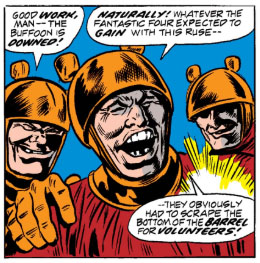 People laugh a lot at Cage in this story, and he never rises to the bait, fighting back with his fists rather than reacting to mockery. Having said that, he can hardly resist commenting on the guards' costumes, which have completed their journey from Kirby's original terrifying robots to their current status as something out of "a crackerjack's box".

(for fellow non-Americans: it's a breakfast cereal that sometimes had free toys in the box)

Suddenly a bunch of robots appear, similar to the ones Cage fought last time, and start killing the guards. Cage follows the robots and discovers that their leader is a very familiar figure... at least to those of us who have been reading a lot of Doctor Doom comics. 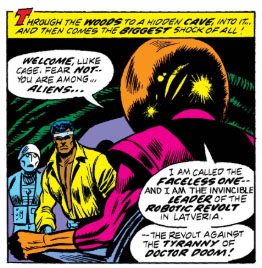 It's The Faceless One! The last time we saw him was way back in Astonishing Tales #3, which ended with him being "driven off by an earthquake." Back then he was trying to depose Doctor Doom by putting Prince Rudolfo on the throne, though it was never clear exactly why he was doing so. This time he has gathered an army of robot followers to try again, although his reasons remain as obscure as ever.

The Faceless One tries to persuade Cage to help him by comparing the robots' plight to slavery, but Cage is having none of it. 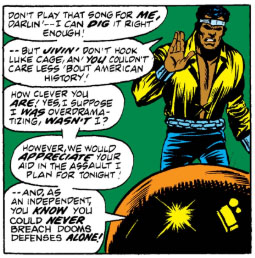 Once again, someone underestimates Cage's intelligence, and once again he immediately puts them right. He decides to help the robots invade the castle anyway, so that he can get to Doom, and George Tuska and Billy Graham kick off the attack with a fantastic panel. 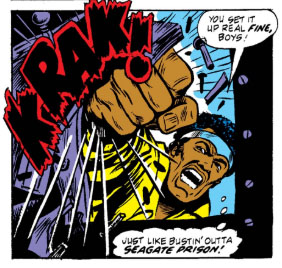 As the attack enters the castle Cage goes in search of Doom, who's relaxing on his throne. He says he's been expecting him, but is astonished to find out that this is not a scheme by Reed Richards, but a genuine attempt to force him to pay up. 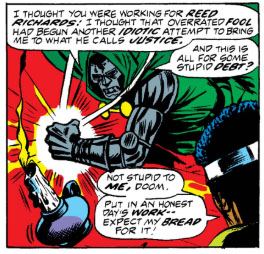 It's interesting that Doom, the arrogant supervillain, is not the first person to express disbelief at Cage's need to get paid. It's a running theme throughout the issue, as privileged white individuals (and, to be fair, a space alien too) laugh at the working class black man's demand to be treated fairly. This time it leads to a fantastic one-two panel.

Is it me, or is this an inspiration for a much more famous sequence? 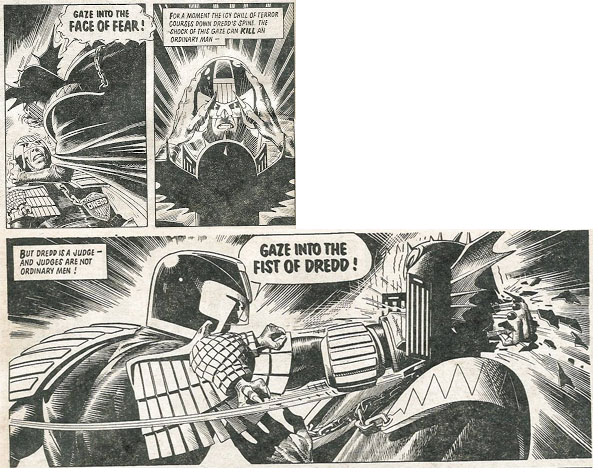 The two have a right proper punch-up, during which Cage hits on the secret weakness of Doom's armour - he has, in his own words, "forged my armor to withstand anything... except repeated stress on a solitary point!" This seems like a distinctly foolish error to make, and hardly fits in with Doom's usual forward thinking. It also gives The Faceless One the ideal opportunity assassinate Doom. 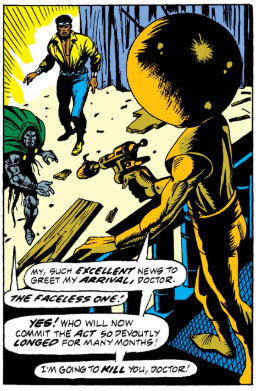 Doom leaps out of the way, giving Cage enough time to leap up onto the balcony and stop The Faceless One from trying again, because "murder's a gig I don't take kindly to." The Faceless One is forced to extract itself from its android body and flee again, off to goodness knows where without ever making it clear what it was trying to do in the first place. Doom demands that Cage follow him, but he quite rightly points out that he hasn't been paid for his first job yet. 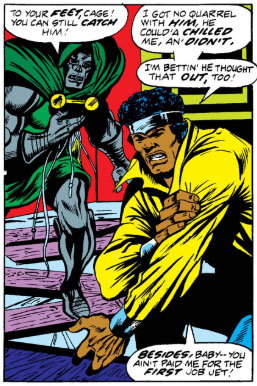 Doom find this absolutely hilarious, thanks him for saving his life, and duly pays up. This feels like a nice bit of characterisation, combining Doom's high-handed arrogance and superiority complex with a recognition of an honorouable individual, even though it does come off as massively patronising.

Cage heads off just as the robot rebellion enters Doom's inner sanctum, and it's only when he arrives back at the Baxter Building that we find out what happened, thanks to The Thing's newspaper. 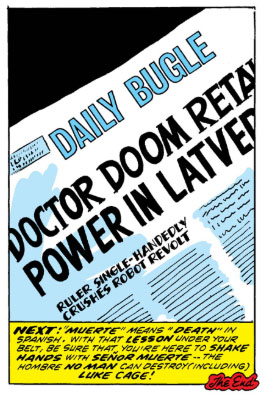 The newspaper is The Daily Bugle, which is of course the newspaper that Spider-Man works for. It's a nice touch which shows how rich the Marvel Universe has become, with it's own newspaper amongst many other aspects of the fictional storyworld. It's also a good end to a thoroughly enjoyable, frenetic, well-written and illustrated story that makes me want to read more Luke Cage!

Other things to note about this issue are the fact that Doom's armour is still very much on-brand with the John Buscema design, and that his character is also in line with the Roy Thomas/Gerry Conway version as an honourable man, with the only hint of Stan Lee's deluded dictator coming in the rather petty refusal to pay his debts. It feels like this is definitely the direction Doom is moving in.

Next up an extremely weird cameo, in the one hundredth issue of 'Daredevil'!