After all the excitement of the last couple of stories, this comic sees Doom back in the most fleeting of cameos, though one which continues the theme of him being the leader of villains.

The story sees Daredevil returning to San Francisco, his current base, in a borrowed Avengers Quinjet, bemoaning the trials of his love life. He sees trouble on the streets and leaps into action, finding himself (in a very Steve Gerber moment) fighting "an armed 'street theatre' group". 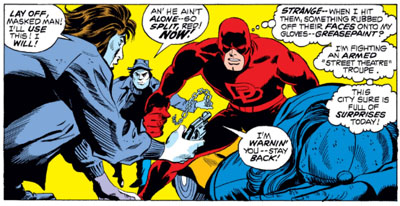 Once he's sorted that out Daredevil talks to the victim of the gang, none other than Rolling Stone Magazine's Jann Wenner! 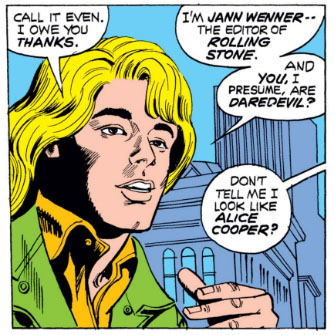 Once again, this feels very Steve Gerber, with Daredevil popping into Rolling Stone's offices and marvelling at how groovy it all is, especially compared to his own lawyer's chambers. The only slight problem with all this is that the artist, Gene Colan, is not quite so up to date, choosing to illustrate the magazine's dedication to the counter-culture with... a poster showing John Lennon in his Sergeant Pepper days. 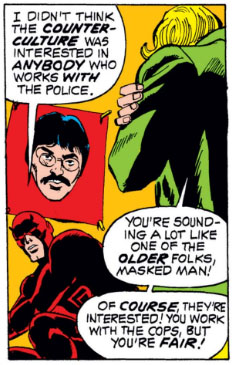 There's a brief interlude where Wenner interviews Daredevil and gets a re-cap of his origin and story so far (this is issue 100 after all), and then everything gets properly weird, as the entire city starts to freak out, apparently tripping and then forgetting about it not long after. Daredevil is the only one who seems to remember what's happening, and as he and Jan Wenner navigate "the cosmic giggle" they meet a succession of his old enemies.

This is where Doom comes in - after fighting off some of his own major villains Daredevil sees a whole crowd of them led, of course, by Doctor Doom.

This use of Doom as a signifier of Super-Villainy originates in his appearances in 'Not Brand Echh' some years ago, where he was deployed to make clear that a crowd of super-villains was meant to represent Proper Baddies, rather than a collection of twits being used for a joke. Without Doom a crowd of villains could be, for instance, some losers going about normal business, or trying to pretend to be superheroes instead, but whenever Doom was leading them it would mean that the reader was supposed to accept that this was a terrifying grouping of evil, there to do proper supervillain business (even if this was undermined in the next panel to service a gag).

The really interesting thing about this is that it leaked out into the 'real' Marvel Universe, with Doom appearing more and more as the leader of these assembled groups, always demonstrating that This Is A Group Of Baddies. That's the case here, with Doom telling Daredevil they're here to witness his end - the fact that Doom is there, as stated above, shows that this is not just a get together of defeated enemies (which, given the loopiness of some of Daredevil's villains, it could well have been) but a coming together of supervillains for a special occasion. It's a hallucination, as a lot of these appearances tend to be, but that makes an even stronger case for Doom representing Super Villainy in the minds of the heroes.

That panel is Doom's only appearance, and Daredevil spends the rest of the issue trying to work out what's going on before coming face to face with another one of his, shall we say, less than terrifying villains, Angar The Screamer! 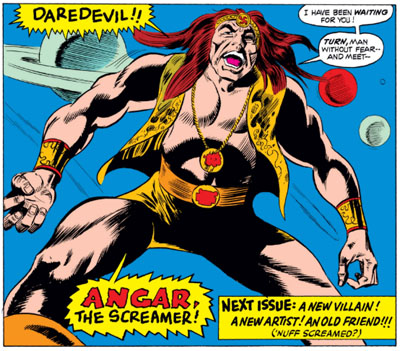 Sadly, we won't be finding out what happens, or what's causing the mass freakout of San Francisco - not on this blog at least - as we're off to visit The Avengers next for another cameo, this time in a much bigger story!