"This Is It!" says the cover, and it certainly is - the grand finale of The Avengers/Defenders War, the first ever big proper superhero crossover, where one story carried on for six months across two seperate series. It was a very big deal at the time, and set the tone for pretty much all of the big crossover series to come - you can see just how exciting it all is by this fantastic splash page: 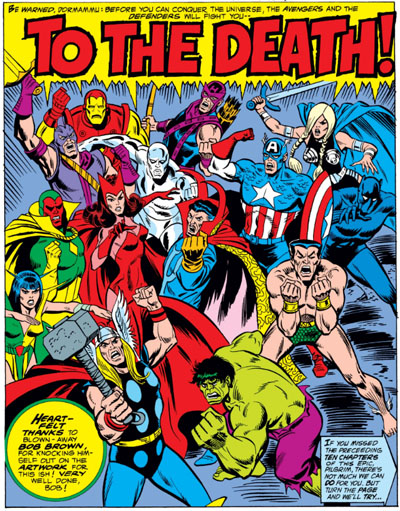 It's odd to think now just how revolutionary this was. There had been crossovers before, and of course one of the selling points of the Marvel Universe itself was that it was a single storyworld with characters that could wander into each other's stories, but this was the first time it had been done on quite this scale.

The story so far has seen the Avengers and Defenders being manipulated into fighting each other by Dread Dormannu, with the two teams coming together here for one big final battle against evil - you can tell it's a big deal because The Watcher turns up, and he hardly ever... all right, he pops up a lot, but still. All of earth comes under attack, which gives Steve Engelheart and Bob Brown an excuse to take a tour around the rest of the Marvel Universe of 1974. 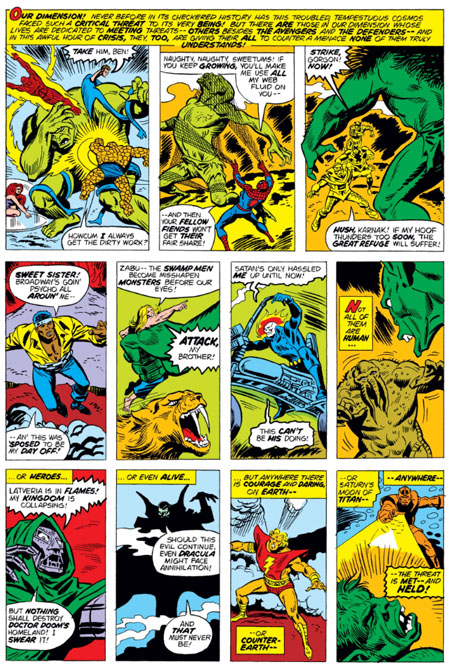 If you didn't know what year this was you would probably be able to guess from some of the heroes that we see fighting - Luke Cage, Ghost Rider, Swamp Thing and especially Dracula, during his heyday of Marvel publication. Doctor Doom is there too, of course, defending his country from attack, and we see again that although the story says he's not exactly a hero, he pretty much is here. He's not working for his own self-interest (except inasmuch as anyone trying to save the world is), and he's certainly not running away and hiding. He's defending his homeland, and his people, showing that he's once again the heroic defender of his subjects, rather than a deluded dictator. His inclusion in this montage also shows his continuing importance in the Marvel Universe, even at a time when he's being used much more for cameos like this, rather than in actual stories.

Having said all that, our next issue sees him returning to the comic of his birth, and also to the role of Absoluten Baddy, in 'The Fantastic Four'!