No Friend Beside Him

It's been a while since we've covered a truly daft comic, where the story makes no sense whatsoever, but we're back in that territory todau with a bunch of characters making entirely silly decisions for no other reason than to keep the story moving.

The splash page carries on from the previous issue, where Mr Fantastic used an 'Anti-Matter Gizmo' to stop his son Franklin from exploding and, for reasons not well explained, the rest of the Fantastic Four were so disgusted that they split the team. It all seems a bit odd to me - Franklin appears later in the story, and seems fine, and surely that's better than being exploded?

We briefly see Johnny and Sue going their own seperate ways, and there's some time spent with Mr Fantastic (who now seems to be going around with Medusa, who is helping him get over the whole situation by taking him out to dinner), but the main story is with The Thing, who gets a letter from his girlfriend Alicia. She's gone 'on holiday' to 'some little country in the Balkans', so the Thing immediately gets on a plane to join her. He doesn't wonder why, or even seem to check where he's going, which seems very odd. Surely you'd have to know your destination just to get on the right plane?

When he arrives (after another passenger on the plane decides it makes sense to pick a fight with a famously strong, ill-tempered world celebrity) he meets Alicia and her not at all suspicious doctor, 'Hans Stutgart'. 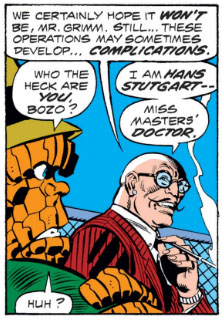 As they walk into town they spot everybody else running home, due to a 'silly' legend about 'some sort of death demon'. 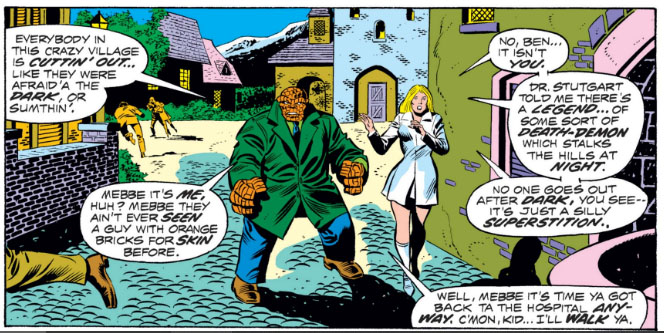 You might think that Alicia, who has met all kinds of weird creatures over the years, wouldn't be so quick to dismiss the possibility of a death demon, but she does. Needless to say, the aforesaid Death Demon turns up a couple of pages later and gets into a big fight with the Thing, who's gone out for a walk. The Death Demon gets away, but Ben is worried - that Demon knew things about him that no Demon has any right to know, something is clearly going on!

Twenty four hours later in this 'small Balkan city' Alicia goes in for an operation which will, apparently, restore her sight, and the Thing is left to wait outside the room. After three hours (!) he finally decides to look through the window to see how it's all going and realises that the entire surgical team have disappeared. The Death Demon appears again, while 'an armored hand closes a fatal switch' and a door opens up nearby. 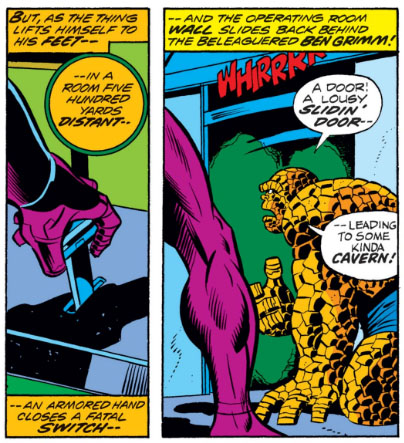 Whose armoured hand could it be, observing events from afar in a small country in the Balkans? I think this would be pretty clear even if you weren't reading about it on a blog called 'Marvel Age Doom', but Gerry Conway tries to keep the suspense building as the Thing and the Demon fall into a cavern, and those hands keep manipulating events. Eventually Ben is captured, as a 'mysterious' figure watches on. 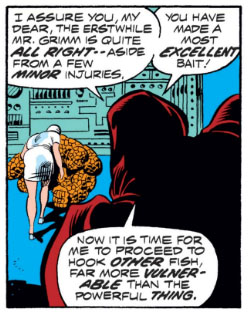 Hmm... is it the Mole Man, do you think? The last couple of pages then show us Reed Richards and the mini-skirted Medusa (Rich Buckler really likes drawing women in very short skirts) arriving for a college reunion, where they're surprised to find that only two other alumni have arrived, a sports coach and... Doctor Doom! 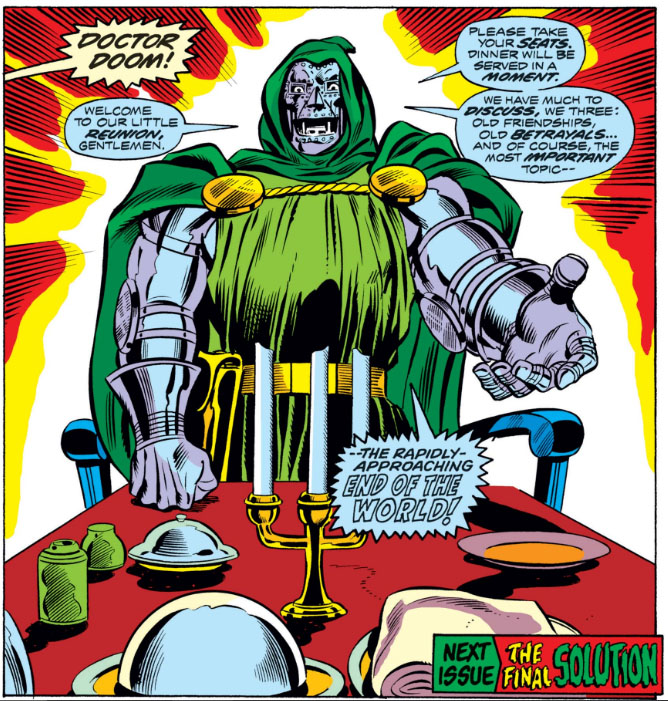 Crikey, who'd've thunk it eh? Apart from the fact that this is a brilliant image (which very much conforms to the design set out by John Buscema) it hasn't really earnt the right to be a shocking ending - surely everybody who knows who Doctor Doom is, already knows it must be him? Still, at least we've got all that out of the way now - let's hope the next issue is a bit better!