The Terrible Triumph Of Doctor Doom!

The first thing to note about this issue is the (brilliant) cover which, in an adjusted form, was one of the first images I ever saw featuring the Fantastic Four. As mentioned in one of my very first blogs, this was used as the basis for the Fantastic Four paperback I bought as a child which started my love of comics in general, and this series in particular. That version was altered so that it featured the Invisible Girl (as she was then) rather than Medusa, but other than that it's the same design, and you can see why it was chosen, as it's a dynamic scene showing the team exhibiting their powers to fight their greatest villain, Doctor Doom. 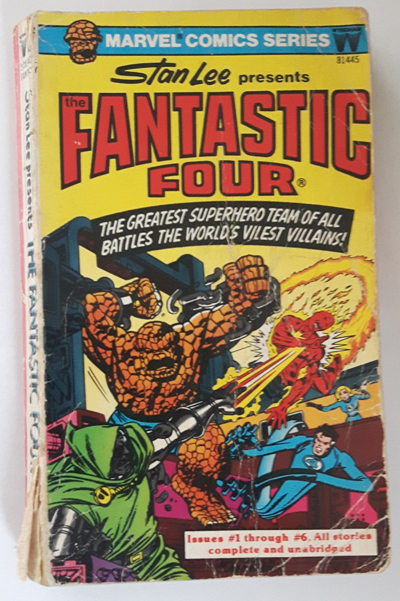 The second thing to note is that this issue shows what a difference an inker can make. The previous story had been inked by Joe Sinnott, who gave it a very traditional Fantastic Four "look", sort of shiny with clean rounded edges. Here Rich Buckler is inked by Frank Giacoia, who makes it look much rougher, perhaps closer to Buckler's original pencils. I first became aware of Joe Sinnott's style when he inked John Byrne towards the end of his run of the title, and I didn't like it at all because it brought Byrne's pencils more into line with everything that had gone before, but here I can see that he provided a vital role in ensuring consistency.

The story's written again by Gerry Conway, and he steers Doom's character back towards the Mad Villain role, as opposed to the sensitive, tortured individual we saw previously in his solo stories, written by ... Gerry Conway. I must admit I found it a bit disappointing that, after that batch of exciting and interesting stories we find Doom here back to being, basically, a Mad Scientist intent only on world domination for its own sake. It may be that Conway felt he needed to focus on the Fantastic Four themselves, rather than the baddy, but it seems a shame to drop so much interesting characterisation in favour of making him a wide-eyed loonie.

Doom easily defeats Mr Fantastic and Medusa, and then turns on his other guests, Coach Thorne (the other college alumni invited) and his wife. The Coach decides that he doesn't need superpowers to fight Doom (which doesn't seem like a very logical conclusion to come to) and Doom zaps him into unconsciousness, after saying that the only reason he was invited was so he could be humiliated. 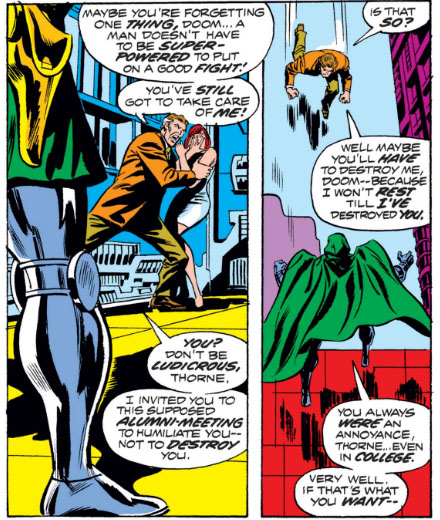 This isn't the only time that PE Teachers will suffer during this story, with a particularly odd interaction coming up in the next issue. I wonder if Gerry Conway had a PE Teacher he really really disliked?

Doom takes Mrs Thorne down to his secret lair, a Steranko-esque double page splash mixing in elements of Jack Kirby. 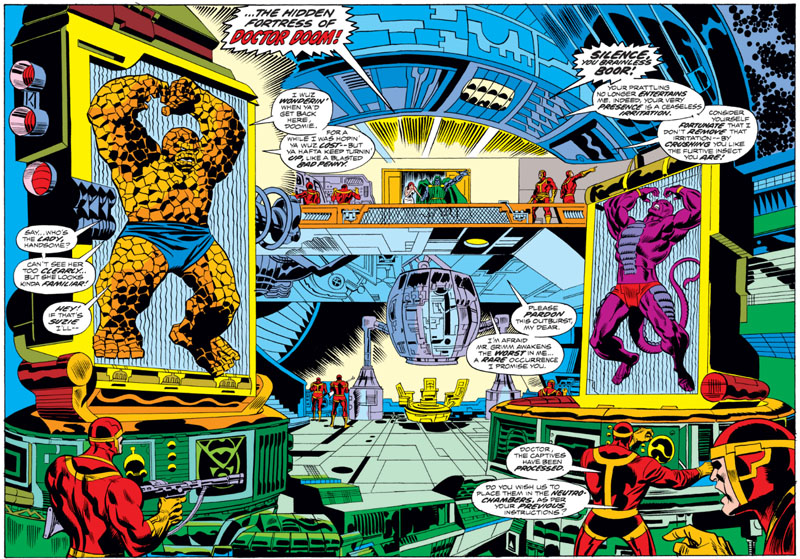 Here he explains his plan, which first involves a recap of the previous issue, where he describes luring the Thing to "a European country bordering Latveria". As with the previous issue, the name of the country is never mentioned, which I guess is Conway's attempt to avoid giving Latveria a definite location, except to say that it's in the Balkans somewhere.

The plan is to use a 'Vibration Bomb' to erase the personalities of all life on Earth and replace them with blind loyalty to Doom. He demonstrates on a couple of lackeys who have been disloyal to him, all the time acting like a raving lunatic Mad Scientist as he forces them to kill each other as a demonstration of his power.

There's then a desultory switch to see what the other members of the FF are up to, which even the captions acknowledge is taking us away from the main story, ending with a note that says "Enough catching up", before we go back to see Doom preparing his missile, containing the Vibration Bomb, for launch. As he does so he considers his plans to become the greatest leader the world has ever known, with everybody chanting his name. 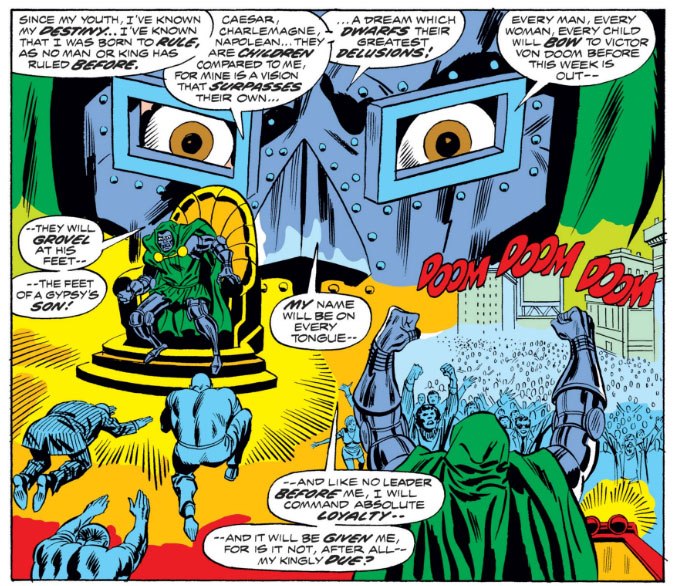 It's interesting that Doom mentions that he is a "Gypsy's son" here. Where previously his humble origins were part of his sympathetic appeal, as a self-made revolutionary who rose to power through his own determination, here they seem to be part of his villainy, that he is attempting to conquer the world in order to disavow his past, and humiliate all those who have tried to do the same to him in the past. Looked at it this way, the kidnapping of a "jock" from his college days makes more sense! Still, this is the only time we get a glimpse into Doom's own thinking in this issue, and it's a long way from the tortured, self-doubting, monologues we've seen before.

There's also a neat little cutaway diagram showing Doom's fortress, in homage to the earlier cutaways of the Baxter Building. It's just a shame the image is too small to show much! 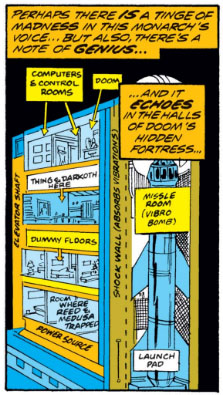 Doom's thoughts are interrupted by the news that Darkoth has escaped, something which Doom solves easily by telling him to behave. For some reason he decides this would be a good time to tell Darkoth the truth about where he comes from, something which will come back to bite him in the bum very shortly.

We then go over to see Johnny Storm and Wyatt Wingfoot sitting in jail, after accidentally destroying some property earlier on when the Human Torch threw a tantrum. The wall of the jail suddenly explodes and a bunch of guards run in, in another homage (or possibly a swipe!) to Jack Kirby. 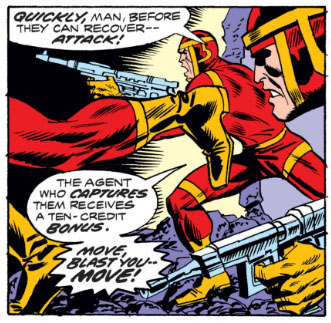 Doom turns up and, once again, easily captures the pair, and then we go back to Doom's base for the final page, where Darkoth visits Mr Fantastic, freeing him along with Medusa and the Thing, in return for them promising to help him be avenged on Doctor Doom. It turns out that he didn't like what Doom told him about his origins, and he wants to have revenge for having been turned into this creature through Doom's science experiments.

The issue ends on a low-key note, with Reed saying he thinks he might know a way to stop Doom, and then that's it. Next time we have the conclusion of the story, and some more PE teacher bashing!