Minor Appearances continues with a WEIRD comic, which is just what you'd hope one co-created by Steve Gerber, Jim Starlin and Len Wein would be like. It sees The Defenders being recruited for a cosmic game of chess between The Grandmaster and... The Prime Mover! 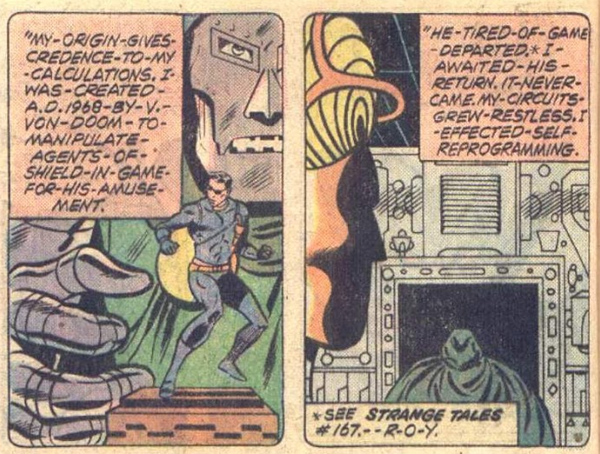 The Prime Mover originally appeared, as detailed above, in one issue of Strange Tales and then disappeared, apparently abandoned by Doctor Doom. It turns out that the hyper-intelligent robot decided to sod off under its own power in search of more games when its creator didn't come back, and to be honest, who can blame it?

There's no more Doctor Doom in the story, but there's a lot of other stuff going on, including some illustrated text pieces, very similar to the ones that Gerber tried out towards the end of his run in Howard The Duck, lots of flashbacks, some general Cosmic Malarkey, and... this very strange sequence:

It also includes an imp walloping the Hulk and, I think, the first appearance of Korvac, who would later go on to fight the Avengers. It all ends with Daredevil gambling the fate of the entire human race on the toss of a coin and, thankfully, winning, due (somehow) to his hypersenses. It's a right rollercoaster of a story, and a prime slab of mid-1970s Marvel!

Minor Appearances Week has one more instalment, coming your way on Monday!