Doom's return to "The Fantastic Four" is, in some ways, yet another minor appearance to follow all of those seen in Minor Appearances Week, as he only really turns up on one page. He does at least speak in this one though, and in many ways he's the driver of the plot.

The story kicks off with the Fantastic Four walking through Central Park, where a bunch of muggers try to attack them. The Thing frightens them off, and then they're suddenly attacked by The Silver Surfer who asks the ever pertinent question, "who shall clobber whom?" He has turned up with only one thing in mind:

The Silver Surfer easily beats the Fantastic Four in a fight - or, rather, The Fantastic Three, as Medusa does precisely nothing. It's very noticeable during this, and other issues featuring the character, that she never actually seems to do anything. She's been brought in to replace the absent Invisible Woman, but for all intents and purposes they could have just left her out. Her powers are very similar to Mr Fantastic's, so it makes me wonder why the writers decided she'd be a good replacement in the first place.

Anyway, The Silver Surfer is just about to kill the team when he realises he can't go through with it. 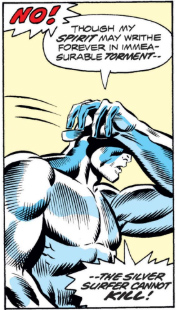 Instead he explains that, after a failed attempt to escape the planet's orbit he fell back to Earth, landing in a "quaint balkan township." 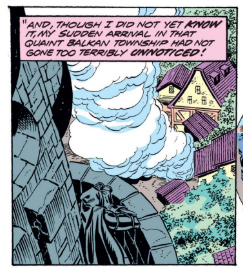 Looking at this image again I realise that Doctor Doom is standing on the balcony watching. I hadn't noticed it before because he'd been coloured the same as the battlements, presumably in order to hide his presence ready for the big reveal at the end.

The Surfer spots a poster of the town's new queen, who looks uncannily like his lost love Shalla Bal. The Surfer goes to find her, and comes across a battle scene featuring the Fantastic Four... or rather Three. 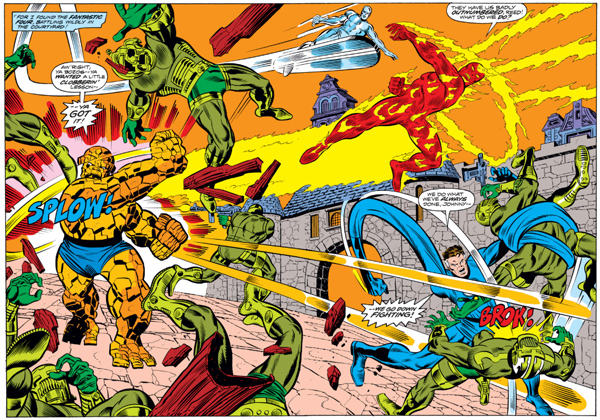 This turns out to be robot versions of the team being used in a military exercise, so the Surfer flies on, into a nearby castle where he discovers Shalla-bal, who doesn't recognise him. The Surfer turns round to discover that he is in the castle of ... Doctor Doom! 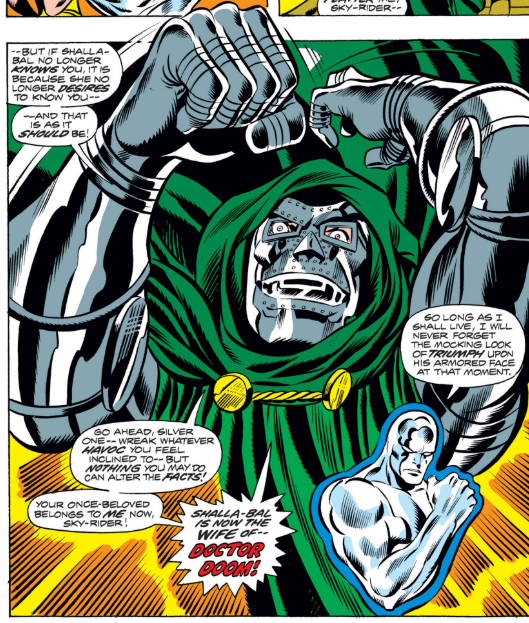 How he didn't realise this earlier is beyond me - he's been there before at least once, has seen Doom's military, and also of course has The Power Cosmic, but maybe he was just distracted by the thought of seeing his girlfriend again?

with his story told the Surfer realises that, now he thinks of it, he really should get on with killing the FF, and the issue finishes with him doing just that. 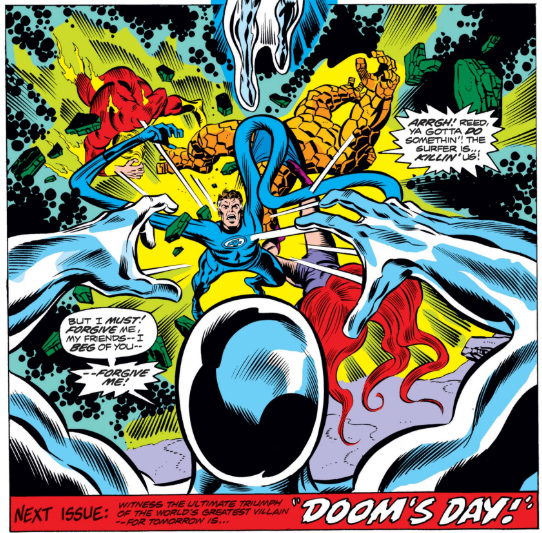 Interestingly, the next issue blurb promises a story called "Doom's Day", which we've had several times before. That won't be the title (it'll be something much less exciting) but it will definitely feature a whole lot of Doom. Before then though, we'll be hopping over to a brand new series to find out exactly how Doom got back to Latveria from space!