During the now legendary 'Minor Appearances Week' on this blog we looked at a reprinted poster of Doctor Doom in Giant-Size Superstars #1. The poster was interesting because it featured a surprisingly accurate list of Doctor Doom's previous appearances, and in today's issue we find out who put it together!

The information comes in an editorial at the back of this issue, 'Giant-Size Super-Villain Team-Up' #1, where Roy Thomas reveals that it was none other than he who put it all together. This makes a lot of sense, as he comes from the world of fanzines, where list-making like this is very much part of the fun. In his (brilliant) book Marvel Comics: The Untold Story Sean Howe discusses how Roy Thomas kept a box of index cards during this period, with details of character's powers and appearances, in order to help writers keep track of who was where, who'd met before, and what they were capable of. Over time this would become a computerised database, but at this point Roy was keeping it all on paper, and it seems that going through this data, and seeing how often Doom and Namor had tried to team-up before, gave him the idea to create this new title.

(ADDENDUM: since writing this blog I've read an interview with Roy Thomas in which he says he doesn't remember creating any index cards, and that it seems a bit too organised for him to have done. It was, however, forty years ago, and the evidence for some kind of recording seems pretty compelling, so I'm going to go with him having forgotten about it!)

The box of index cards comes in handy right at the start of the story, as Thomas speaks directly to the reader, acknowledging that they have (very) recently seen Doom alive and well in Fantastic Four #155 with no explanation of how he escaped from being blown up in a spaceship at the end of Fantastiuc Four #144 almost a year earlier. 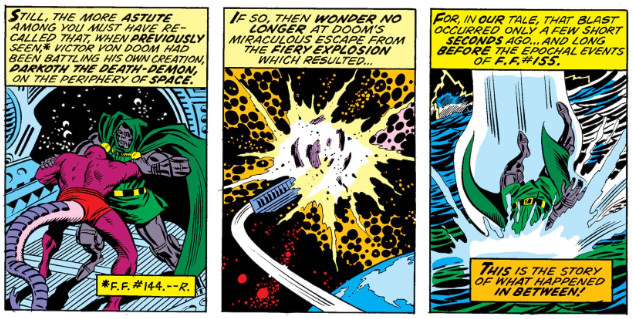 It turns out that Doom fell into the ocean (from space) and was picked up just in time by Namor, who pops him into 'The Electronic Stimulatron' which he has onboard his ship and blasts him back to life. 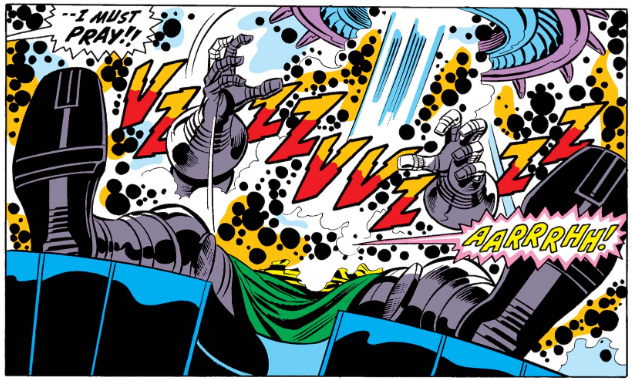 The box of index cards comes out again as Namor reminds Doom of a conversation they had back in Submariner #20 about being "natural allies" and Doom hit backs with a reminder of their first team-up in Fantastic Four #6. Thomas seems to be really enjoying using this resources, as Doom thinks back to the team-up Namor mentioned in Submariner #20, which is reprinted here in full. It's an interesting story from the time when Doom's character was being pulled in two different directions, with his creators Stan Lee and Jack Kirby turning him into a maniacal despot, and others like Roy Thomas and Gerry Conway pushing back towards his original status as a tortured outsider.

That conflict, as we've seen recently, was still going on in 1975, with Doom alternating between lunatic and anti-hero, and this issue sees Thomas giving Doom a shove back into anti-hero territory as he thinks back on his old adventures. The reprint is followed by a one page interlude leading into Doom recalling the events of Marvel Super-Heroes #20. 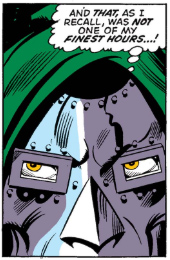 I have to respectfully disagree with Doctor Doom on this one - 'This Man! This Demon!' very much WAS one of his finest hours, especially in the second half of the story where none other than Roy Thomas delved further into the character's background for an exploration of what makes him who he is.

The moral that Doom himself takes from this re-telling is surprisingly self-aware, seeing that he himself is not to be trusted, and he decides not to ally himself with Namor again because they'd end up betraying each other. A fight breaks out, during which Doom escapes, leaving Namor to shout to the skies like a drunk outside a nightclub at 2.30am that one day they will get back together again. 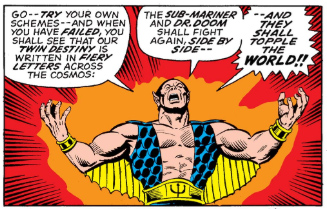 And there the story ends, with the aforementioned editorial promising more team-ups to come. This may not have been a particularly noteworthy story in and of itself, but the sudden explosion of references to past adventures does point to this being written around the time that Roy Thomas's index cards were created, and that's something that will become a bigger and bigger part of the storyworld for years to come.