This story kicks off right where the last one ended, with Ben Grimm complaining about Doctor Doom's use of technology, as "every time I put the kibosh on 'im he turns out to be a blasted robot!" It's a fair complaint, which Doom himself witnesses via his usual video screen. 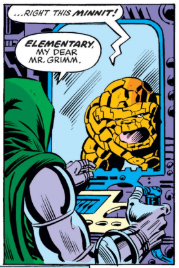 Doctor Doom sure does love his video screens! He then tears himself away from the telly to witness the birth of his latest humanoid creation, which he's decided to call "Doomsman II", after the creature we last saw back in Astonishing Tales #3. Unusually Roy Thomas doesn't give us a reference for this one, although he does then have Doom refer to his attempted alliance with Namor in Giant-Size Super-Villain Team-Up #1.

We then cut to The Silver Surfer and Shalla Bal, who have a go at that tried and tested amnesia cure "snogging" to see if it'll help Shalla Bal remember who she is. 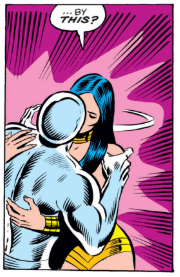 Before we can find out if it worked we swicth to the Fantastic Four making their way through the castle although, yet again, it's The Fantastic Three, with Medusa just tagging along. They turn a corner and find themselves face to face with Doomsman II in the second chapter of the story, which is called ...

To save you the bother, it means "a situation in which the obligation to make a move in one's turn is a serious, often decisive, disadvantage." I'm not entirely sure that it appplies here, but it does have a lot of "Z"s in it.

After a bit of fighting we return to find that yes, smooching IS a medically proved memory aid, as Shalla Bal realises that she's not Shalla Bal at all, but a local Latverian girl called Helena who happens to look exactly like her, and in whom Doom implanted vague memories in order to use her against the Silver Surfer. The swine! 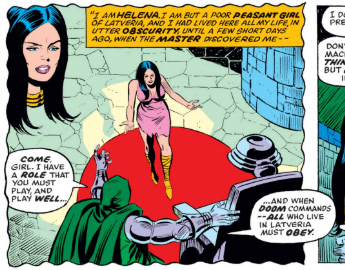 Almighty HECK then kicks off, with the Surfer joining the FF to defeat the Doomsman but, just as they are about to fully put the kibosh on Doom, Helena intervenes to point out that they are equally matched, and that any further battle will "destroy this castle and all the archives in it - the priceless treasure trove of a nation's legacy!" It's an interesting argument against fighting Doom - and one which many people have, and in future will, entirely ignore - and in this case it works, with all sides realising they have reached another chess (mixed with tennis) analogy.

Yes, it IS a stalemate, not zugzwang at all! But what's this? Just as Doom fumes about the fact that he lost control of proceedings the frame borders tatter and we pull back to see that - oh no! - the whole thing was a cunning ploy by Mephisto to punish The Silver Surfer. That really WAS Shalla Bal all along, unbeknownst to herself, Doctor Doom or anybody. I'm not quite sure how this is an attack on the Surfer, as he had no idea either, but still Mephisto seems quite pleased with himself.

It's an odd, unsettling ending to a storyline which has never quite seemed to know where it's going, or what it's using the characters for. This will be Doctor Doom's last appearance in "Fantastic Four" for a couple of years, but he's going to be busier than ever, with his own (shared) series to look at and, next time, even more Minor Appearances!