We're back to Minor Appearances again for this issue, as Doctor Doom appears in a single panel of a story which sees various supervillains being approached by a mysterious figure called The Black Lama, who wants them to compete for a "golden globe" which will bring them inner harmony and thus allow them to conquer the world. I would have thought that gaining inner harmony would mean you wouldn't be so bothered about conquering the world anymore, and Doctor Doom seems to agree, sending the lama packing. 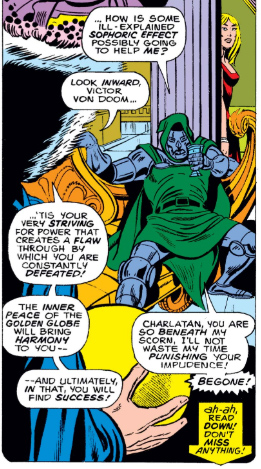 The Red Skull and Fu Manchu are similarly dismissive, leaving lesser villains like MODOK, The Mad Thinker and Titanium Man to punch it out. As ever, Doom is thus used as a signifier of Serious Supervillainy - his decision not to take part in the competition, alongside other heavyweights like the Red Skull, gives the reader clear guidance about exactly what sort of supervillain they're going to be seeing in this contest. Whiplash might turn up, but Galactus definitely won't!

That's your lot for Doom in this story, but come back next time for more Giant-Sized Super-Villain Teaming-Up!