The cover of this issue promises "the most unexpected guest star of all! We kid you not!" and, for once, this isn't hyperbole.

Before we get to that we've got a whole issue to get through, which begins with Namor trapped in Latveria, shouting for Doctor Doom. His captor turns up, revealing that he's been watching Namor pace about through the eyeholes of a painting. 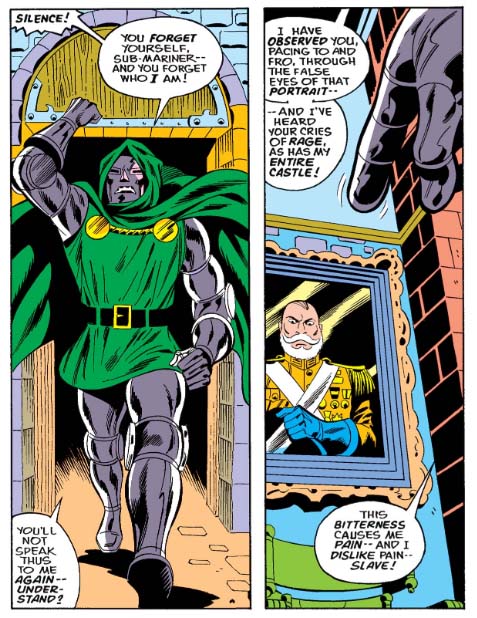 This is a VERY Doctor Doom thing to do, as is the fact that he revels in his victory, bossing Namor around and then stomping back to his main office where he has another video screen set up, showing the approach of The Fantastic Four. 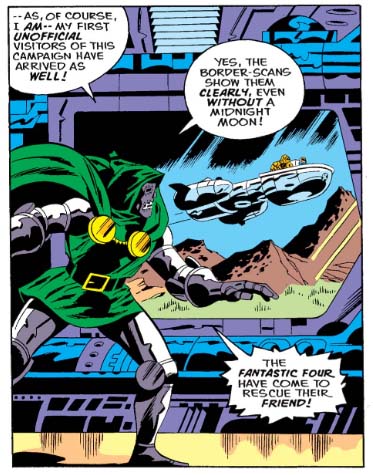 We then get several pages of The Fantastic Four in action, just as we did last time. I wonder if this was Steve Engelheart auditioning to be the regular writer on that series too?

Eventually we get back to the stars of the series, with Namor still imprisoned, catching a glimpse of The Shroud creeping about outside. Doom, meanwhile, is in a meeting with a special guest, demonstrating a nuclear explosion! 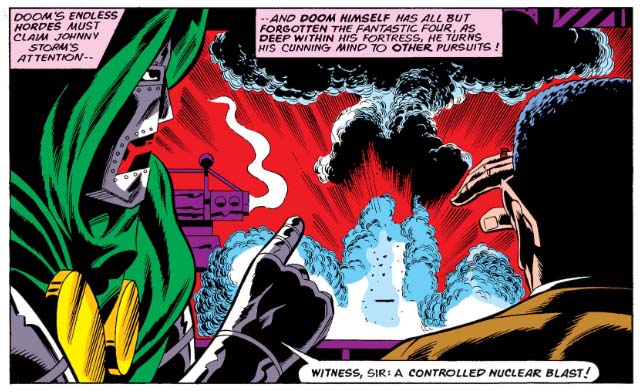 Doom takes his guest, whose face is concealed by shadow, on a trip round his armoury before heading back to the throne room where they conclude their discussions with a toast to their negotiations. 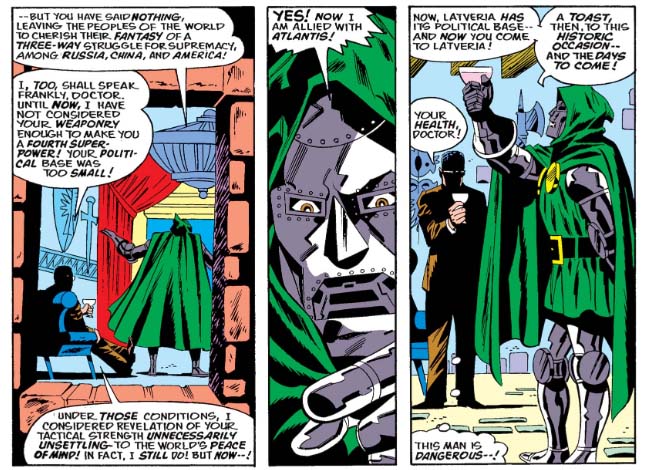 They're interrupted by a Snivelling Lackey called Bela, who has come to tell his boss that The Fantastic Four have, inevitably, beaten his army of androids. Doom pops down the corridor to Namor's cell and gives the order that the Sub-mariner was dreading: to attack the Fantastic Four! 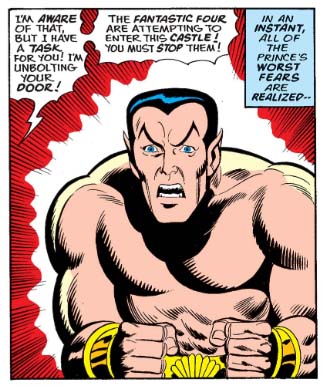 This whole thing seems profoundly daft to me - Doom shot Namor, destroyed the suit that kept him alive, and then made him promise to be his slave in exchange for not destroying Atlantis. I'm pretty sure that there's a better way out of this problem than just going along with whatever Doom says, but Namor doesn't think so, and heads off into a big fight with the FF which takes up most of the rest of the comic.

Eventually they subdue him and return to Doom's castle where they discover that his guest is none other than... Henry Kissinger!!

Now that's what I call a twist! Jason Dittmer and others have talked about the 1970s being a period when superhero comics reflected the American people's loss of faith in their government, and nothing shows that more than having your Secretary of State forming an alliance with Doctor Doom!

There's not really any way to top that, and so the issue ends with The Shroud once again lurking melodramitcally, this time in the rafters. The next issue blurb promises an origin for him, but let's be honest, after that massive reveal it's going to have to be something pretty special!