Deadly Is The Doctor Called Doom

We're back in the world of "Spidey Super Stories" again, with Doctor Doom's origin undergoing a few changes since last time. The first time he appeared in this series he was just "a scientist who built a special metal suit" that made him "the strongest man on earth." Now, however, we are told in the inside cover that "Once Victor Von Doom was just a very smart scientist. Then a terrible accident happened..." 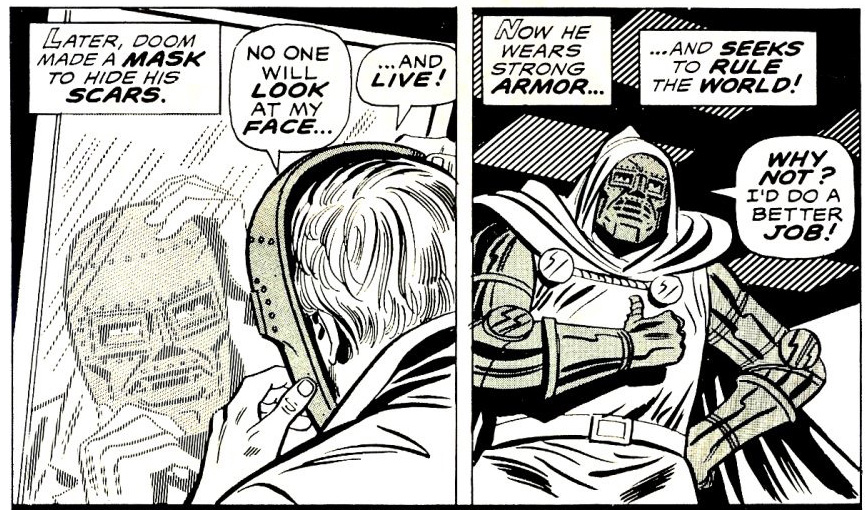 I love Doom's confidence here, which is an abbreviated version of his character in the main Marvel Universe too. It's also interesting that he's still got his hair in this universe, showing that his accident may not have been quite as damaging, nor as potentially frightening for a young audience.

The main story begins with Spidey backstage at a talent contest, which before we pull away to discover that Doctor Doom is also watching. 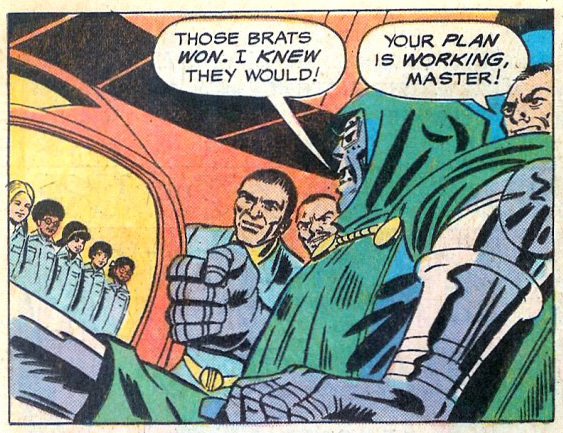 Here we see that this version of Doom is very close to the main Marvel universe version, watching events via a television link. His henchman however are different, here shown as regular goons rather than robots or Latverian stormtroopers.

The talent show turns out to be sponsored by Doctor Doom, with the main prize a trip to his kingdom. This seems very odd, but that seems to be how these stories work, with a dream-like logic where events just sort of happen without anybody questioning it. Spidey, unsurprisingly, is suspicious, so when The Short circus (a young dance group from "The Electric Company" TV show) fly out to Doom's kingdom, he decides to go with them.

Doom meets them at the airport, displaying his usual outward friendliness and surprise that anybody would doubt him.

They head off to the castle where Doom sits everyone down at a table and proposes "A toast to all children, pure and innocent". Everyone drinks their soda which, of course, turns out to have been dosed with some kind of sleeping potion. This has happened before in the main Marvel universe, and we can't blame Spidey for falling for it when even Mr Fantastic got fooled.

Spidey wakes up to find himself being experimented on by Doctor Doom who reveals that - gasp! - the contest was a trap all along, designed to capture Spider-man! 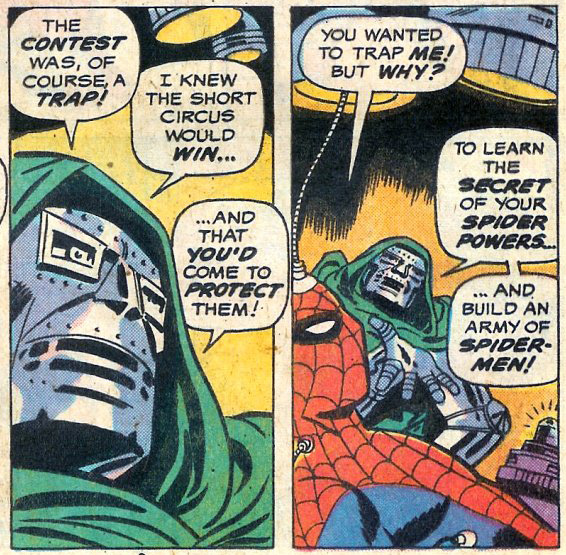 The next couple of pages see Doom revelling in his dreams of power, thanks to an army of Spider-men which look a lot like the robots/henchman his main universe counterpart uses, although these have a single spike in their helmets rather than the usual mickey mouse ears. 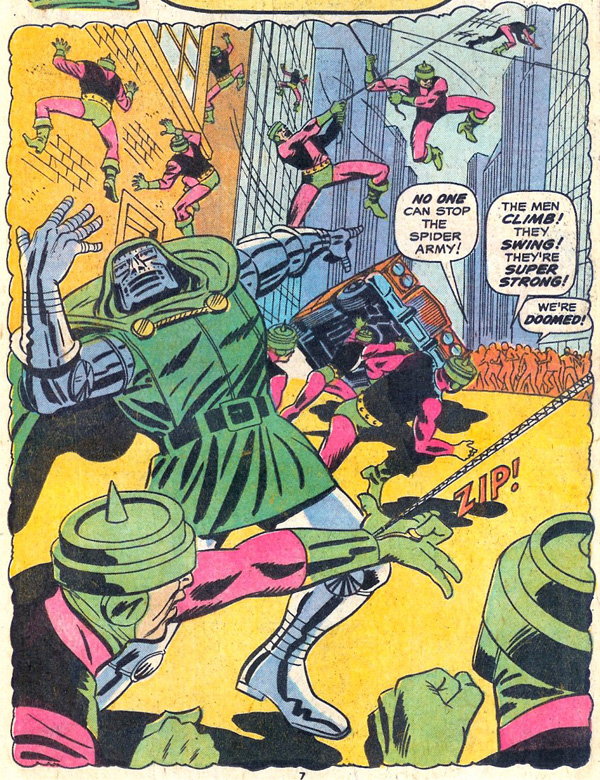 The plan culminates in Doom being crowned King Of The World, with the ceremony taking place at The United Nations. 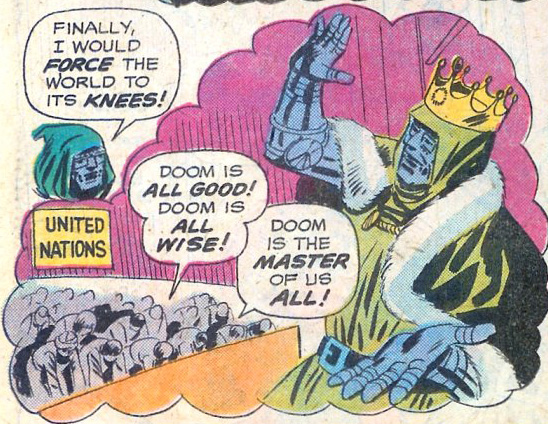 What is it with Doctor Doom and The United Nations? It pops up again and again in stories involving him, generally depicted as a sort of over-arching World Government that can hand over power of all its member states purely through a vote. I'm no expert on international law, but I'm fairly sure that's not right.

Meanwhile in the dungeons one of The Short Circus activates a special ring that Spider-man gave her earlier in case of emergency, which calls an army of spiders towards the castle. Once inside Spider-man is able to use his telepathic power over spiders to get them to turn off the machine that's trapping him and ... hang on, what? Spider-man has telepathic powers over spiders? The Spidey Super Stories version of Doctor Doom may be very similar to the original, but clearly this version of Spider-man is a lot more powerful!

He frees the kids and together they run through the castle looking for a way to escape, but unfortunately end up in the wrong room. 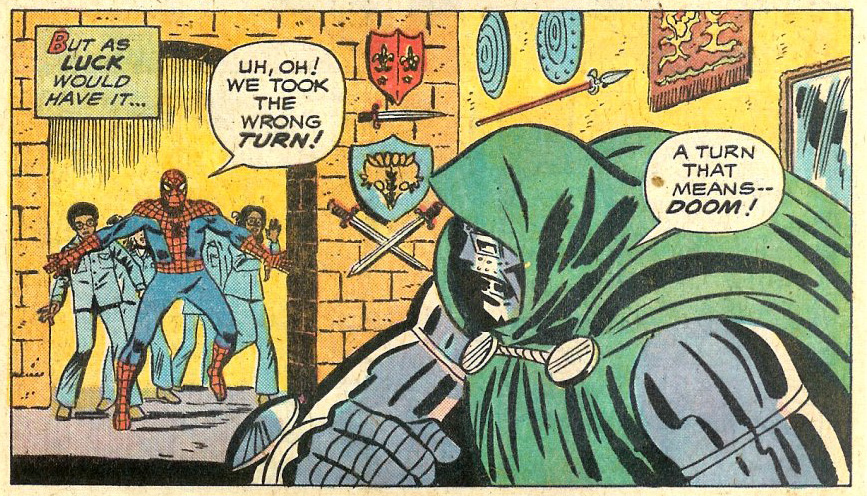 A big fight breaks out with Spider-man and The Short Circus against Doom and his men. The kids manage to drape Doom in a ceremonial flag, and when he manages to free himself he runs at what he thinks is Spider-man... 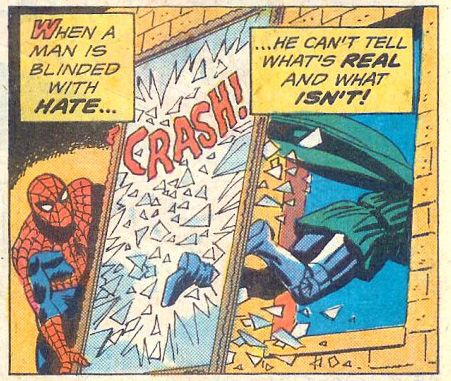 ... but is in fact a mirror, behind which is an empty window. Thus Doom re-enacts one of his earliest characteristics, throwing himself out of a window at the end of a story to escape justice!

The story ends with Spidey and The Short Circus on the plane home, discussing that fact that a rusty Doctor Doom got fished out of the moat. That, however, is not the last we see of Doom, as later on in the same issue we get this rather glorious montage of images. 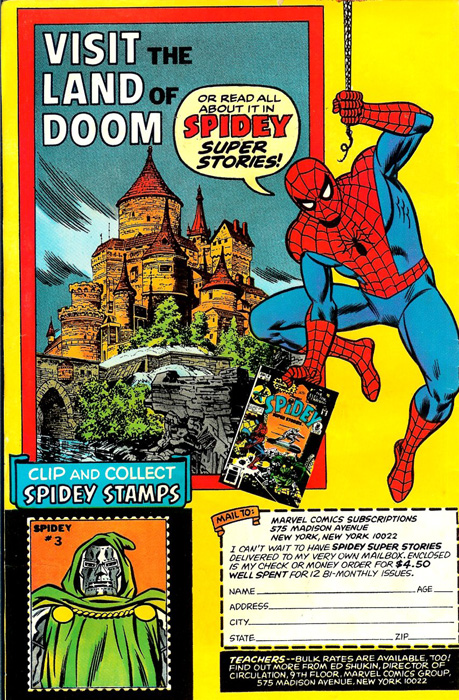 I love the way they've mocked up a tourist poster for what is really just a subscription ad - I'm pretty sure that's a Jack Kirby picture of Castle Latveria too. There's also a different version to the "Marvel Value Stamps" we've seen in the main universe, this time called "Spidey Stamps".

So ends a very interesting episode, where Doctor Doom acted in a way that was surprisingly close to how he appears in the "normal" comics, even when Spider-man definitely did not!