The splash page for this issue has an extremely helpful opening paragraph, telling the reader not to be confused, as they haven't picked up the wrong comic by mistake - this is carrying on from Avengers #154.

It's nice of them to point this out - I must admit I was confused myself when I first looked at this page, not least because Avengers #154 isn't in my database of issues that feature Doctor Doom. Happily for me and my collection methodology that's because he isn't in there! It's still odd to have this jump though - there was nothing in the previous issue to indicate that the story would be carrying on in another series, but then I'd guess that The Avengers was selling enough copies not to need help from Super-Villain Team-Up, although the reverse may not have been true!

For those who haven't the time to catch-up, Avengers #154 sees Namor's nemesis Attuma putting slave collars on the Avengers, which allows him to force them to do his bidding - in this case, beating up Namor. They head over to Hydrobase, bemoaning their fate as they go, while we return to Latveria, where Namor is amazed by how brilliant his master is at creating robots. 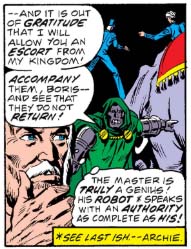 Because, of course, this is a Doombot - that explains everything! Except - it isn't!! 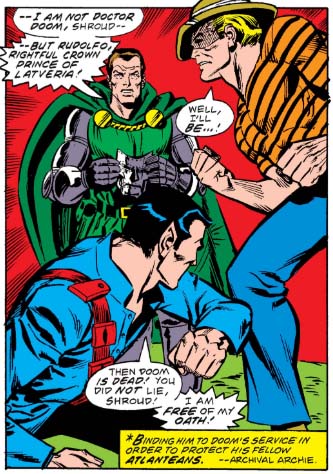 This is a great twist by Bill Mantlo (surprisingly nicely drawn by future editor-in-chief Jim Shooter), although it does make me wonder how on earth Boris, who has known Doom since he was a child, was fooled?

Rudolfo appears to have changed since last time we saw him, claiming not to want a return to monarchy anymnore, but wanting the opportunity to lead his people to freedom. We then get an extremely succinct recap of Rudolfo's previous attempt at revolution, including some nicely abbreviated copies of the actual artwork from that issue. 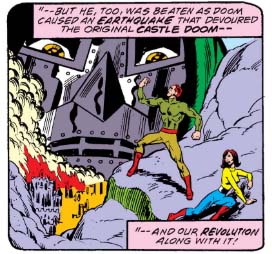 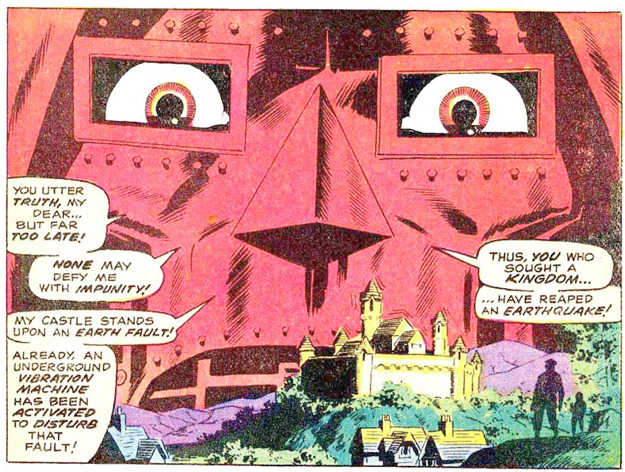 Finally assured that Doom is dead, and he is released from his oath, Namor immediately clears off, heading back to Atlantis to check on his people. We then switch our view to Hydrobase where Doom is loafing around, relaxing while he's meant to be working on a cure for the people who have been transformed into amphibians. 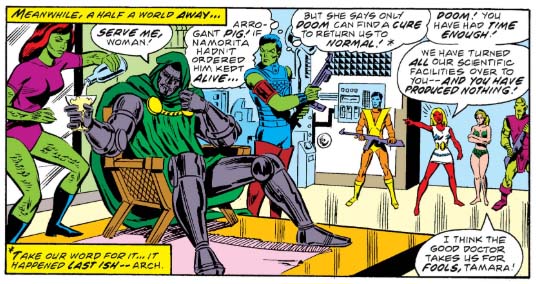 Namorita demands results, and Doom is delightfully cheeky, praising her extravagantly and claiming that he has totally got a cure. In a terrifying prediction of future office life, however, he then bunks off even more by taking a personal call on his video phone, talking to a "Gregor" about a mysterious "client" he has lined up. 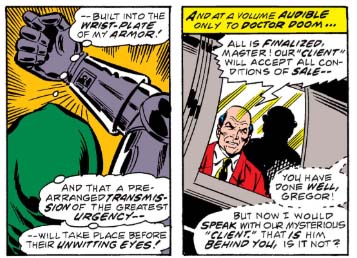 Alas for Doom he is spotted, but in the confusion manages to grab Namorita as his prisoner. Before he can press his advantage the Avengers arrive - Doom points out that he has a non-aggression pact with the USA, which Iron Man (incorrectly) refuses to believe. 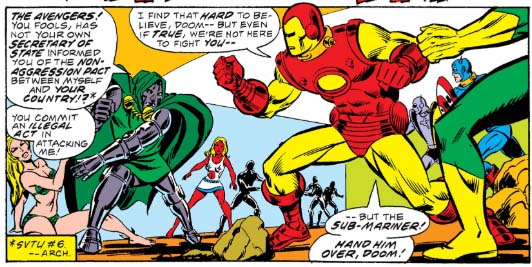 They demand that Doom hands Namor over and, rather than simply say he's not there, Doom gets annoyed at them making demands upon him, and the inevitable Big Fight breaks out. It looks like Doom is winning, but before we can find out for sure we switch again to a subplot about The Whizzer being in hospital - something which has not been mentioned at all in this series, having been carried over from The Avengers, and never will be here again!

The issue ends with Namor fighting some Russian jets, piloted by some (very) Russian pilots who say things like "Lenin's Ghost!" They tell Namor that they're on high alert over Latveria, because (in a massive dump of exposition) Doom is "after a special weapon housed at a Maryland Research center, with it he will be invincible." Rather than ask why on earth Russian jets are patrolling Eastern Europe on the lookout for someone who is rumoured to be thousands of miles away in America, Namor turns around and flies off, determined to stop Attuma getting his hands on some weapons.

It has, to be honest, all been a bit confusinbg, with the switches in location and the various Doom's, Doombots and disguises, but it'll all be worth it next time when the story crosses back over into The Avengers and we get to see George Perez's first go at Doctor Doom!