The Time Of The Terrorist

Doctor Doom makes his way into yet another media format this time, appearing as the villian in the first storyline in Spider-man's newspaper strip. This strip began in January 1977, written by Stan Lee and drawn (beautifully) by John Romita Sr and, with various other artists and ghost writers, would run for over forty years, only ending shortly after Stan Lee himself died.

The strip makes for mildly frustrating reading at first, as each three panel storyline is constructed so that the first panel is usually a recap of what's happened before, and the Sunday strip generally being unnecessary to follow the story, so that readers who could only follow it in a daily edition wouldn't miss out. This was, and probably still is, standard practice for an adventure-style comic strip, but in it does mean that there's an awful lot of strips which start or end with J Jonah Jameson leaning out of a window, angrily shouting the story so far at Spider-man!

Spider-man himself is slightly different from the comics version - here he's seen as a frightening, creepy individual by New Yorkers, while his alter ego Peter Parker is rather hairier and more matinee idol. It's as if Lee and Romnita are merging the Spider-man of Ditko's early run with the Peter of their own run shortly afterwards. 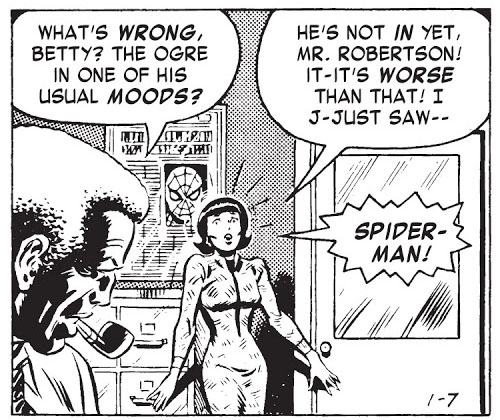 Doctor Doom doesn't appear in person until the very end of the second week of strips, with the precediing fortnight concerned with introducing the reader to Spider-man's supporting cast as they all wait for Doom to arrive. He's been invited by J Jonah Jameson to - wait for it - address the United Nations! 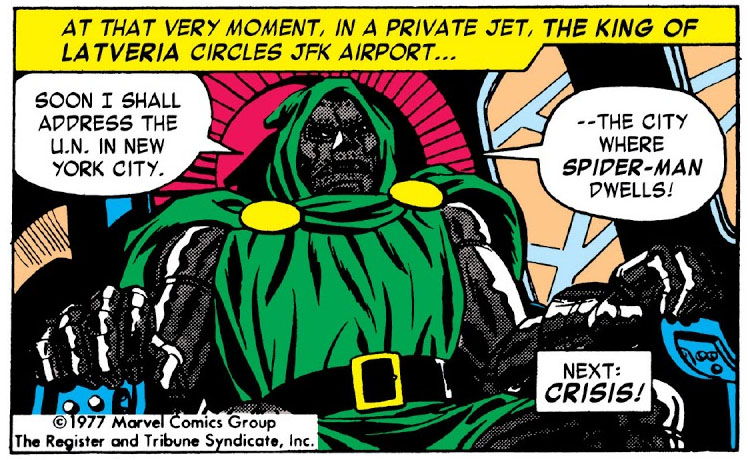 What is it with Doctor Doom and the United Nations? He's been there in the regular comics, Spidey Super Stories, the cartoon and now here, to the extent that it's almost as much a part of his world as his castle and the Latverian embassy!

One small difference here is that Doom is the actual King of Latveria, rather than just the "Lord" as he's usually termed. It doesn't make any difference to the story, so I assume this was done to make it easier for new readers to understand in the quick three panel version of the Marvel Universe. We do still get a brief, yet fairly complete, version of his origin in the Wednesday to Friday strips on week six, which sticks pretty closely to the regular comics version, including some near swipes of that version.

The only big difference, in fact, is that Reed Richards doesn't appear!

When Doom finally arrives in New York he's very rude to an ingratiating J Jonah Jameson. He holds a press conference where he stops a crate from landing on some news reporters, which he blames on Spider-man, thus happily reinforcing the Daily Bugle-promoted view that Spider-man is a menace and Doctor Doom is a hero - just as was the case when a very similar story played out in Spidey Super Stories #9. Here, as there, Doctor Doom is speaking to a meeting of the UN - a smaller sub-committee in this case, although it does contain some very familiar faces. 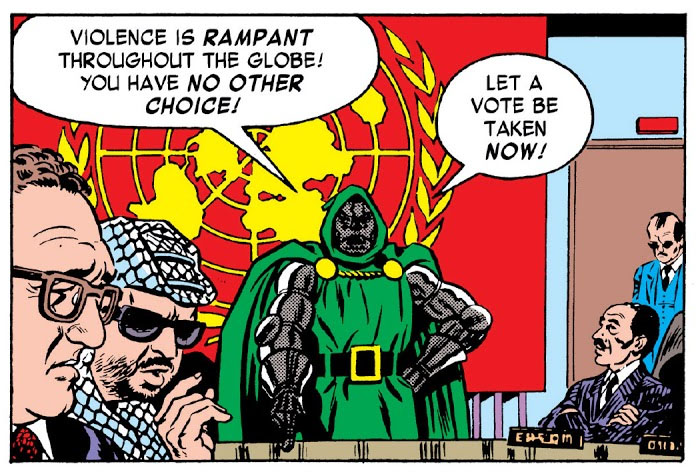 Does Henry Kissinger have a non-aggression pact with Doctor Doom in this universe as well? Either way, the assembled dignitaries are very wary of Doctor Doom, refusing his offer of taking full control of the world's security services to destroy terrorism. 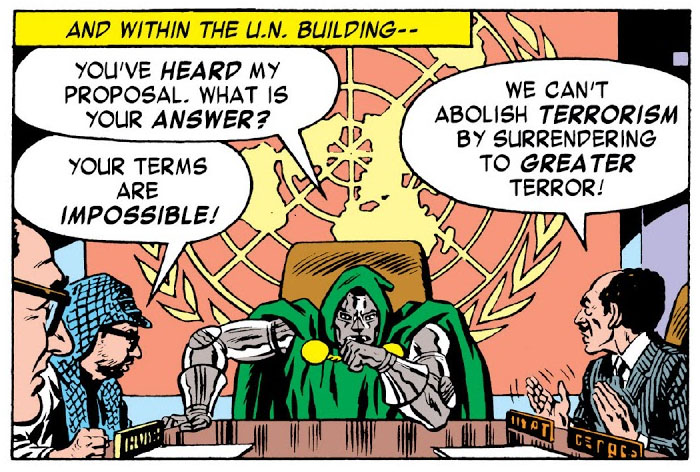 Maybe our universe is the only one where the UN DOESN'T have the power to decide policy in all member states? Doom doesn't take kindly to this and locks the world leaders in the room with him, apparently as part of his plan for world domination. This makes little sense, but luckily Spider-man bursts in for a fight during which he is knocked out and, for some reason, dreams the aforementioned precis of Doom's origim.

The fight carries on, with Doom burning through Spidey's webbing but then getting trapped by a specially prepared web-fluid which causes his armour to short circuit. Doom thus has to fight back using only his "super strength" until he's caught by a judo throw which, accoring to the world leaders, means Spider-man is the winner.

Doom is so disgusted in the world leaders for siding against him that he storms out, refusing to have anything more to do with them, rather like someone who angrily quits their job five seconds after being sacked, much to the dismay of his biggest fan. 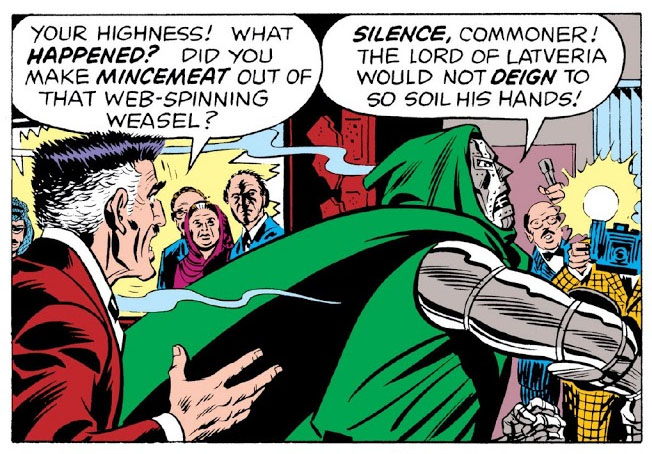 And there this first foray into newspaper strips ends, with the story's attention immediately switching for the story beginning the following day with Doctor Octupus. It's been a very faithful rendition of Doctor Doom for the first part, and oddly similar to the version seen in Super Spidey Stories. He will return to the newspaper strip very soon, but before then we've got the thrilling conclusion to Doom's battle with the Red Skull - next time!