This is an important comic in the publication history of Doctor Doom, as it marks the end of a long series of stories starring him as the lead character, beginning seven years earlier in Astonishing Tales #1, moving briefly into Sub-mariner and then continuing in Super-Villain Team-Up. It's been one long run with him as the lead character (or sharing that position with Namor), but after this he returns to being the guest villain in other characters' series.

Which, really, is what he spends most of this story doing, as the focus switches to Magneto and The Beast. They're trying to persuade the mind-controlled Champions to help them defeat Doom but are surpsied to find that this is impossible - despite the fact that they already know that everybody on Earth is under his control. Come on, Magento and The Beast, pay attention!

To be fair to them, it is quite a complicated set-up, and so the editors (who provided the helpful "Read Super-Villain Team-Up" note last time) include a pretty detailed description of what's happened so far, right above the team's logo where the origin blurb would usually go.

The Champions spend the first five pages in the traditional Big Fight Based On A Misunderstanding, not giving The Beast enough time to explain what's going on. The action then switches to Washington where Doctor Doom is being feted by the White House staff, including a Bob Dylan-quoting Jimmy Carter. 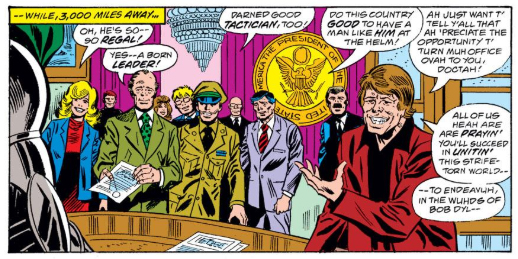 This is, understandably, more than Doom can handle, and he storms out onto the lawns just as the Hulk arrives. Doom's security guards leap to his defence, and Doom thanks them, as he often does, with a slap. 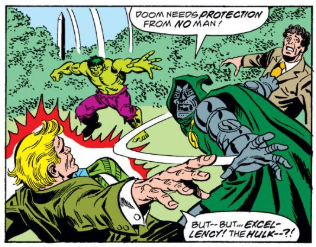 It turns out that Doom has summoned the Hulk to work for him, presumably as some sort of bodyguard, which immediately contradicts what he's just said about not needing protection. The Beast and Magneto arrive, closely followed by The Champions, and then another Big Fight breaks out between all of the superheroes. This only ends when Doom orders The Champions to fight for him, causing great surprise for Ghost Rider. 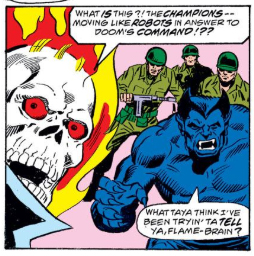 It turns out that he's not affected because, according to an editorial note from Archie Goodwin, "since the hell-spawned Ghost Rider does not breathe, he never inhaled Doom's neuro-gas". It's a neat get-out, which also implies that Doom has no control over robots either. Ghost Rider helps the Beast, and between them they manage to hold the Hulk and the other Champions at bay, leaving Doom and Magneto to fight it out between themselves, in a battle that hints at Bill Mantlo being a secret fan of Jon Pertwee's Doctor Who. 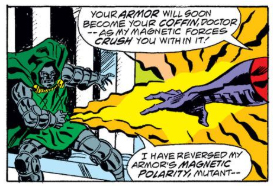 Doom calls in his other minions - the White House staff - to fight for him, forcing the conscious heroes to pull their punches so as not to hurt them. While this is going on Doom prepares to kill the Beast, forcing the Ghost Rider to attack with Hellfire and leading to this rather cartoon-ish image. 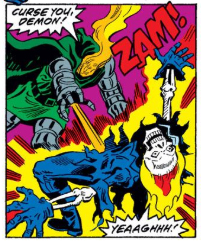 With the inside of his mask burning Doom is forced to take it off. He manages to cover up his face while he does so, but is unable to avoid exposing himself to the neuro gases in the atmosphere. 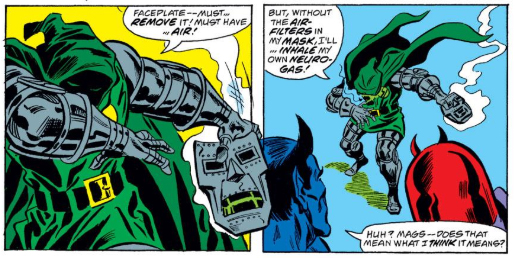 This immediately returns everybody to full consciousness (which doesn't make a huge amount of sense) at which point the Hulk and Magneto, along with the army and White House staff, clear off, leaving the Champions to ponder the immobilised Doctor Doom. 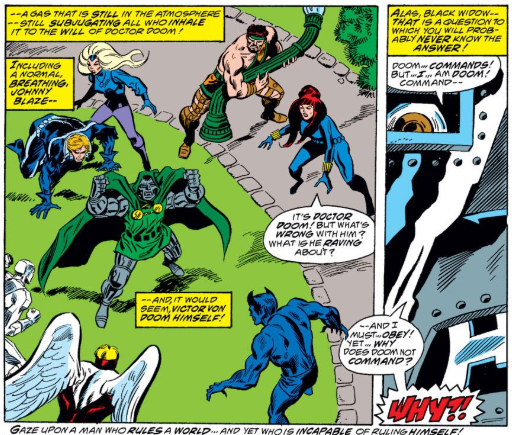 He's stuck in one of those logic loops, like Star Trek used to do - Bill Mantlo clearly does like sci-fi TV! This doesn't make a lot of sense either, but it's a neat twist in a story that's been full of them, with Doom first conquering the world without anybody knowing, only to fall victim to his own devices. In theory the neuro-gas is still in the atmosphere, so if Doom can find a way of giving himself orders he should be back in control, but I have a sneaking suspicion that things won't work out that way. Perhaps we'll find out in the next story, which sees him going up against the soft-rock stylings of ... KISS!